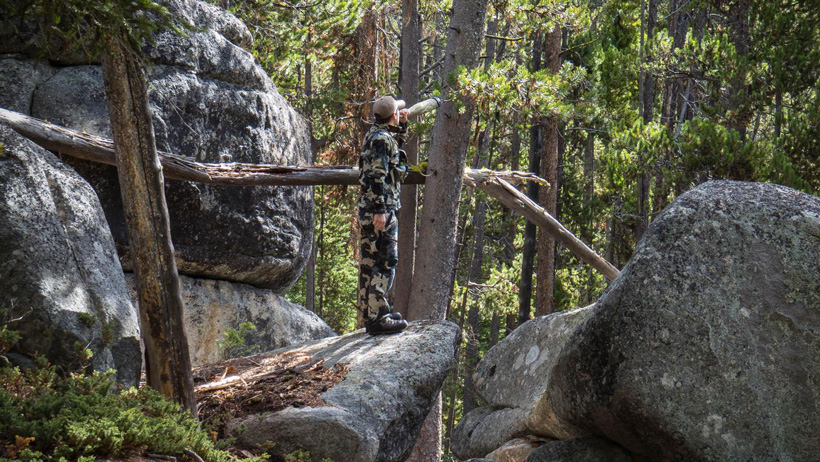 With archery elk seasons kicking off across the West, many hunters are making their best laid plans for the opener in hopes of successfully punching a tag. While we all dream of pristine high mountain basins and screaming bulls, the simple fact is that tactics for bulls during the first week of season can vary greatly than those we may use during the middle of September. The challenges of the early season can be plenty, ranging from blistering temperatures and bachelor bulls to unvocal elk and overall slow hunting. However, hunters who adapt to these diverse conditions will begin to find themselves placing more and more value in those early hunts instead of using these as scouting days for the upcoming rut.

1. A quick note on calling

Before diving too far into early season calling techniques I feel it’s important to first touch on elk behavior in this time frame as well as what elk and hunters alike are conveying vocally. During this period bulls will begin bugling more and more though nearly all of this is merely social banter and has little to do with defending, or stealing, hot cows. All too often hunters encounter a bugling bull on opening weekend and mistakenly think the bull is looking for a fight and call accordingly. The encounter generally ends in a massive let down and a now educated bull living to see another day. The important thing to keep in mind here is that during the early season bulls are merely looking to size each other up, learning who is in the area and trying to get a grasp on what the coming weeks may be like.

Cows are very rarely coming into estrus this early in the season and the urge for bulls to run in screaming, challenging each other, and stealing cows is unnatural; calling in this manner can certainly send a bull packing.

Here’s the bottom line: during the early season, it is important to play it cool and try to avoid the urge to respond to a bull with a bugle of your own that would make Lou Ferrigno run for his life. Try to think like an elk and remember that this is just a social gathering before the party really begins.

For me, a good location bugle is the basis of nearly every archery hunt and something I’ll use all September long and into October. For early season bulls, I like to find high vantage points to bugle where my sound will cover a great distance and allow me to quickly make a play if needed. If a response can be solicited, it is important to note that the bull is not responding out of anger or frustration, but more of a “Hey, I’m over here!” Overcalling or becoming overly aggressive towards the elk at this point can quickly ruin your chances of ever getting into bow range. Instead, try to pinpoint the bull’s location and begin cutting the distance.

Earlier in the season, I’ve found that bulls are far more susceptible to allowing me to bugle my way in versus a rutting bull that will view you as a potential threat. Once I’ve cut the distance to 100 to 150 yards based upon the bull’s last known location, I’ll let out another bugle; again, keeping things simple and nonthreatening. If the bull responds, I will keep moving forward while keeping a close eye on the wind and available cover. If you have good cover or terrain breaks to move through, do not be afraid to make a little noise and cover ground quickly; think about how fast an elk walks. If the bull does not answer my bugle, I will wait a few minutes and then bugle again. If, again, I do not get a response, I will sit in a spot with several available shooting lanes and wait 30 to 60 minutes to see if the bull may come in silent—a common scenario with early season bulls.

If the bull keeps talking, I will continue to move forward—all the while keeping a sharp eye out. The last thing I want to do is run face to face with a bull as he sneaks in silently to check out this new intruder. If the bull has continued to be vocal, I may let out one last bugle at around the 70 to 80 yard mark and quietly move towards the bull an additional 30 to 40 yards. Often, the bull will be focused on where he last heard you and may end up walking right into your lap.

Cold calling is a technique that I’m not overly fond of as it generally results in elk sneaking in silently, but it should have its place in every hunter’s arsenal. This will generally be my last resort to actually walking in on a vocal elk, but it can be incredibly effective against bulls not willing to move or respond to calls.

A very common occurrence for most hunters at some point in the season will be a bull that answers a location bugle once and then simply shuts up. This could stem from previous encounters with hunters, lack of interest, or that the bull simply doesn’t feel like talking to you. Most hunters in this situation will generally do one of two things: leave the bull and search for other opportunities or blast through his basin throwing bugles or cow calls left and right and, eventually, blowing the bull into the next unit. Again, we need to evaluate what the bull was conveying to us through his response. 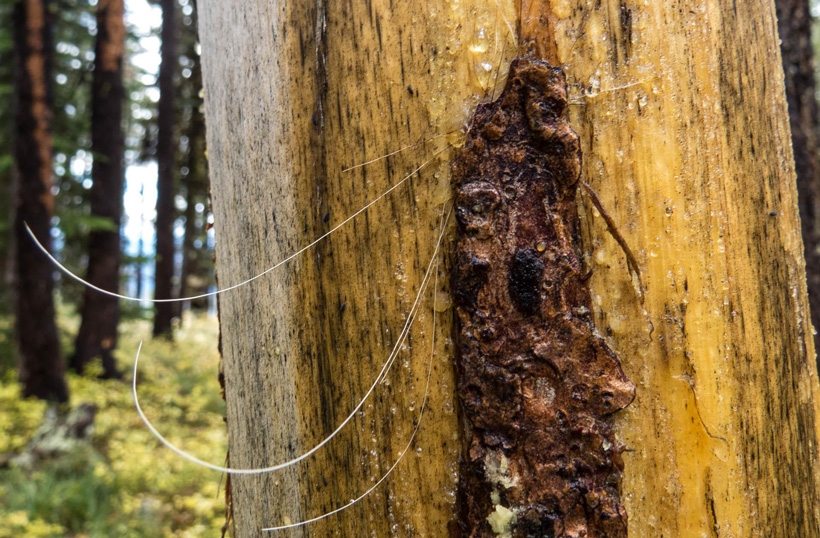 Whether the bull is not feeling socially apt or is call shy due to previous encounters, you know that he is somewhat interested because he did respond at least once. Normal calling techniques will generally not work here so we need to figure out a different approach to sell ourselves to this bull. Try your best to establish a general location of the bull, get your wind right, and then try to close the distance to under 150 yards. Here I would want to capitalize on the fact that early season bulls are still trying to size up any potential competition and curiosity will generally get the best of them. Combining raking with very soft and mellow grunts and chuckles can imitate a bull simply establishing his dominance or displaying for other bulls or cows in the area. This alone can be enough to draw a curious bull well within bow range. Again, keep in mind that any approaching elk may come in silently and you may call in elk you didn’t even know were in your vicinity. When selecting a spot to call from remember to make sure you have good shooting lanes and range a few locations first to get your bearings. This technique can also be used in close proximity to bedding areas or areas where sign is very apparent.

Another very effective hunting tactic for early season elk can be sitting on wallows. This will generally not produce the heart pounding elk experience all hunters dream of, but the fact is that many successful hunters kill their bull off a wallow nearly every year. Wallows not only provide drinking water for elk, but are also a place to cool off, avoid insects, and serve as a social gathering area. These are areas that may or may not be hit regularly and hunting these spots can require a dedication of hours and, sometimes, even days. The use of trail cameras can be extremely beneficial here and may be used to potentially pattern an elk though bulls are notoriously hard to reliably pattern.

Keep in mind that due to most wallows being found in low bottoms and draws, the wind can be a major factor and is something that may switch often. Some wallows may simply be “un-huntable” because of this. 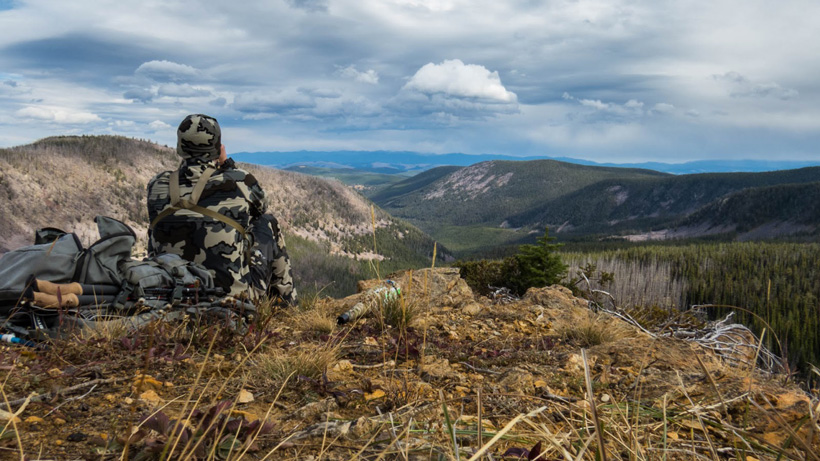 In country where elk can be glassed from a distance, hunters may be able to establish entry points into feeding and bedding areas that elk are using. Once a reliable pattern has been discovered, hunters can set up blinds—either natural or artificial—or simply establish quick ambush points. When picking your spot to sit and wait, consider shooting lanes, visibility, wind directions, and even contingency plans if things go south. This style of hunting can really suit hunters hunting in open terrain, areas of heavy pressure, or herds consisting of a large number of animals.

When all else fails getting back to the basics and employing simple spot and stalk methods can still be very effective. If the elk are not talking vocally; however, I have verified there are through sightings or sign, then I will likely pick some “elky” areas to slowly cruise through. With the hotter temperatures typically found in the early season quietly slipping through dark, north facing slopes can lead hunters into unsuspecting elk encounters as they move between feeding and bedding areas. Keep tabs on your wind and try to move with the wind direction favorable to your target destination. The exact circumstances surrounding the encounter will largely dictate your next move whether it is calling, dogging the herd, or attempting to get ahead of the elk and try for an ambush.

While many hunters generally treat opening weekend as a training hike for the upcoming rut; those who practice good tactics for early season bulls can enjoy some great hunting with bulls that are likely unharassed. Keep your calling in check and really consider what you are saying to the elk with each bugle or cow call you throw out. This is a time where elk are largely sizing each other up and establishing the who and the what. Go in swinging and you’re likely going to see a lot of elk rumps as they bail over the next ridge. Play your tactics to your terrain and employ what best suits you and your area.