How to score and field judge elk - Part 1 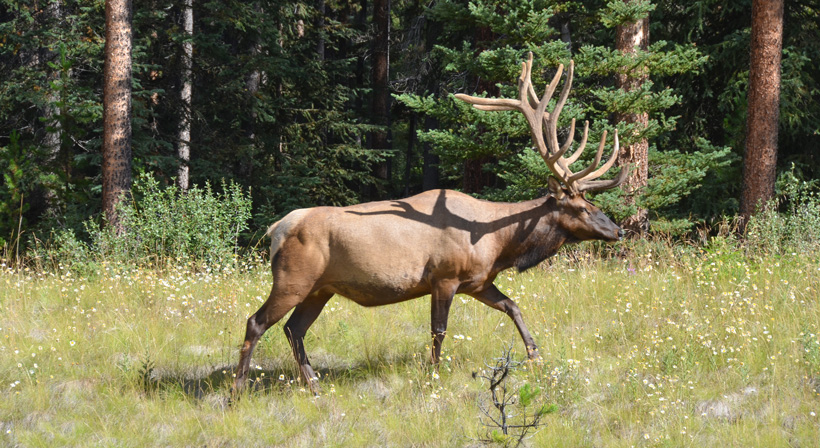 Field judging elk is an art, while measuring dead elk is an exact science. Hunters looking to break into the B&C minimums or hunters looking to figure out the difference from a 370” bull from a 390” bull all need to dissect a bulls rack long before they decided to pull the trigger. The following methods I have used for a long time when picking apart a bulls rack.

There are several ways to field judge elk. The first method is to air judge – also known as “the wing-it approach,” which is based on experience and prior knowledge. While not quite reliable, it has its place at times. The second method requires you to actually break the elk down and measure him by estimating actual point and beam length, mass and inside spread. The final way to judge is through the Estimating Shortest Points Magic 200 Method. I gain the most consistency and accuracy with my field judging by actually scoring lots of antlers and, with each one, I gain more confidence. I love to field judge bulls and then score them on the ground to see how close my field judging was to the real thing. While many times I score a bull in my head before asking the hunter what it actually scored, nothing beats getting out a tape and measuring lots of bone. My guesses have been wrong many times, yet it is amazing how practice lessens the gap between field estimates and the actual measurements.

Note: If you are new to elk antler scoring or scoring in general, you can jump down to the bottom and watch the short four part video series on how to score an elk antler.

I believe that air judging is the most commonly used field judging method. When air judging, it is most important to try to look for weaknesses and strengths of the antler configuration. Next, try to figure out how mature is the bull that you are looking at and keep it simple. Ask yourself if the bull is young or mature, then move on. First impressions of a bull while air judging is extremely important. Usually your first impression of a bull is pretty honest and accurate. You want to look for anything that is sticking out or extraordinary. Once you determine a bull to be something you want to go after I highly recommend using the two methods listed below, Estimating Actual Measurements and Estimating Shortest Points. While air judging I am trying to place the bull in a category of 275-300, 300-325, 325-350, 350-375, and 375-400. Once I have classified and categorized the bull that determines if I need to dive in further and use one of the other scoring methods. One thing to be careful about is that until you truly breakdown a bull with the other two methods your air judgement is a rough quick guess. I highly recommend dissecting a bull thoroughly before deciding to harvest that animal. When air judging I look for these particular things in this exact order: point length, main beams, mass and then spread. Be careful not to air judge too quickly because once you start saying a bull is 325” and he really is 300” your judging scale gets skewed.

There are several things I like to do when trying to estimate the actual measurements on a bull elk. First, I use anatomical references to estimate several of the point lengths. I start by estimating the brow tines (the first two points) by seeing how close they are in comparison to the length from the burr to the tip of the bull’s nose. On a mature bull, that measurement is usually 15” to 16”. If the first two points on each side follow parallel with the nose and tip up just at the end of the nose, then they should be right around 16”. Be aware of straight looking points without much end curve because they are often shorter than you think. Long brow tines usually will follow the nose and then curl or bend upward. You should look for at least 4” of curl for a 20” tine).

Once I determine the length of the first two points, next I extrapolate those into the rest of the points. Many times, the third points are the source of a bull’s weakness. Make sure that you look for curl or lots of curve.

Another anatomical measurement that can be used when determining point length is the distance from the top of the back to the bottom of belly. That measurement is generally about 30”. When a bull is broadside, you can compare his fourth point to that measurement. If the point is 10” shorter, then the bull probably has a 20” fourth point. Once you estimate the length of the fourth points, move to the fifths and compare them with the fourths to determine their length. 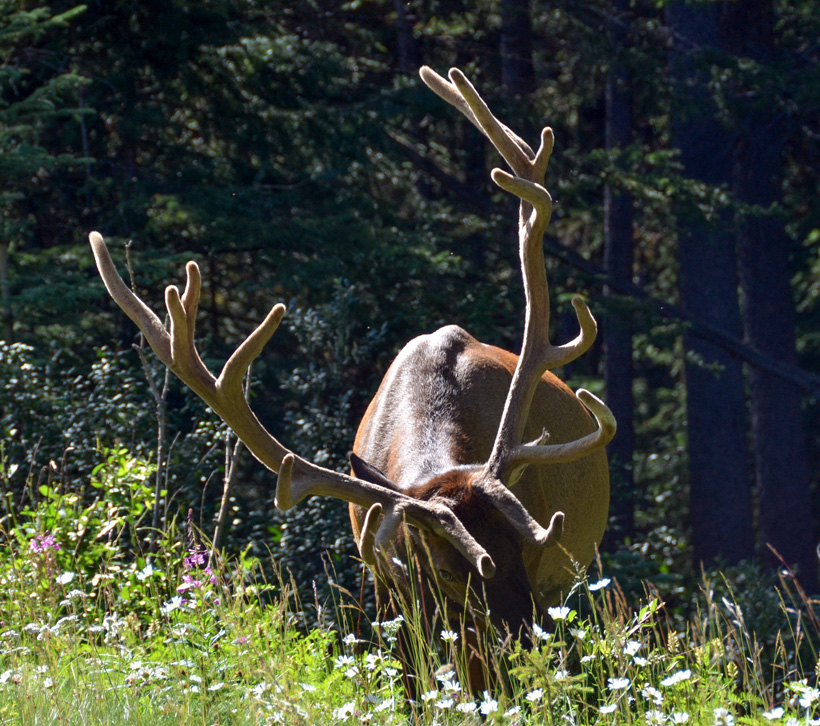 Next, I estimate the length of the main beam by using an important anatomical measurement. When a bull has his head down feeding, I determine whether the main beam is higher or lower than the hump on his back above his shoulder. The distance from that hump down his front leg to his hoof is generally 54 to 58”, depending on the maturity of the bull. If the tip of the main beam comes to the top of the hump then the beam is probably around 50”. If it is shorter or longer than the hump on the back, I add or subtract inches accordingly.

Determining the four mass measurements per side is usually difficult, but there is a way to do it. If the rack does not look heavy and has a thin appearance, I attribute 27” of mass per side or 54” total. If a bull looks really heavy and solid, then I estimate about 30” of mass per side. Trying to determine mass is very hard and requires scoring quite a few racks, but if you use those numbers, you will often be close. 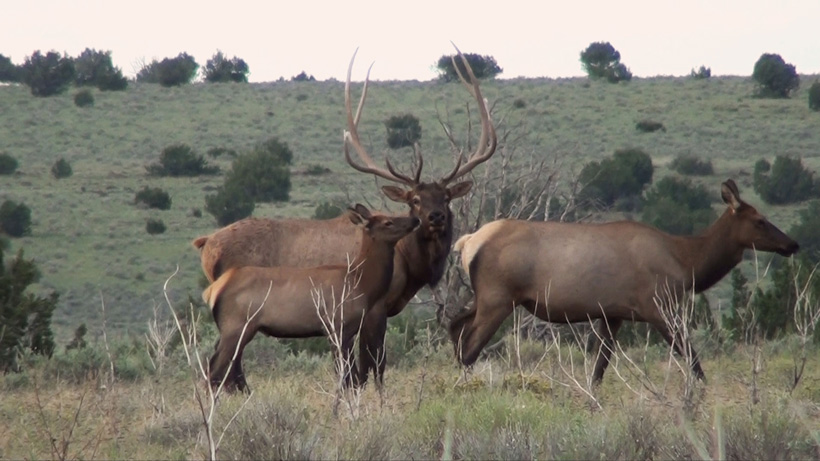 There is quite a bit of “air judging” that gets done while estimating measurements, but if you use anatomical references, you can often get pretty close to the real measurement. I decided to cross reference my anatomical measurements with Clay Goldman of Mogollon Taxidermy. You may want to do the same with a taxidermist in your area.

Of course, there is a great shortcut for judging bulls that uses anatomical references, but instead of trying to estimate each measurement individually, I use a magic number for the main beam length, mass, and inside spread and then I compare the length of the points from one side to the other and estimate shortest points. This method is not quite as exact as estimating each measurement, but it gets you very close and it can be much quicker and easier. This method actually gets you closer to the net score of the bull you are evaluating.

Next, I estimate the length of the shortest point for each antler, double it and then add them up. Be careful with these estimates because whenever you double a measurement, it can make your score go up or down drastically. Do your best not to overestimate your shortest points. Now add the total length of points to the magic number of 200 to get the gross score.

Finally, go back to the main beam, mass and inside spread. Is the main beam really 50” or is it 53”? Is the mass heavy or light and how does it compare to 30” per side? Is the bull really 40” inside or is he 36”? If you think those measurements deviate from the magic number, just add or subtract the differences accordingly.

Four part video series on how to score an elk:

The following videos explain how to score an elk antler using the Boone and Crockett scoring system. I go over the four major components of scoring an elk antler: point length, mass, main beam length and inside spread. This is meant to be used as a fun tool to help you sharpen your elk antler scoring skills.

Part 1 - How to score an elk antler

Part 2 - how to measure point length on an elk antler

Be sure to check out these two podcast episodes for field judging reference at home or while at hunting camp. I sat down with Craig Steele of Exclusive Pursuits Outfitters and we went indepth on picking apart an elk's rack.

Check back next week when I go into even more detail and provide indepth examples on field judging elk.