What is the best arrow for bowhunting? 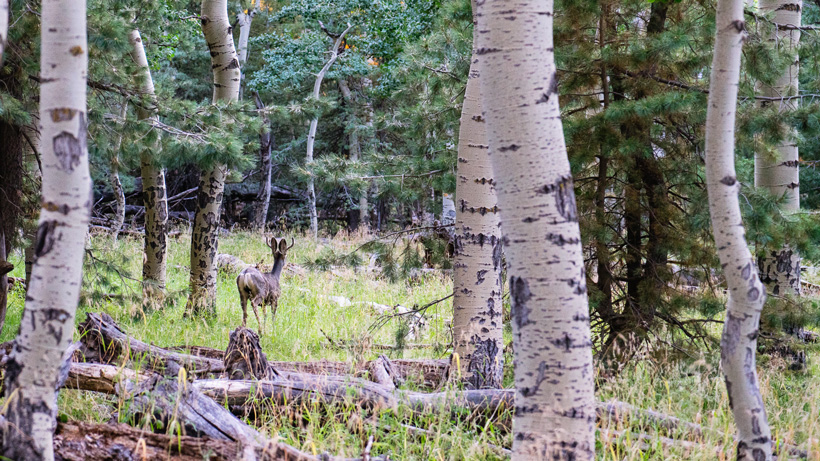 Successful bowhunting requires a certain recipe, right? Between the strategy/knowledge on the hunting side and the right gear choices, there are many ingredients that we need to get right. One of those ingredients is arrows. You know. Those long skinny things that sometimes collect dust in your quiver during hunting season? They are the bridge between our bows and a filled tag. The finger that hits the off switch. Yes, arrows are an important part of the recipe and the “final touch.”. There is more to getting that final ingredient right, though, than just picking out a random dozen arrows somewhere. So, how do we go about doing this? With so many different arrows on the market, how do we go about picking the right arrow for us and our bowhunting goals?

What species are you pursuing? 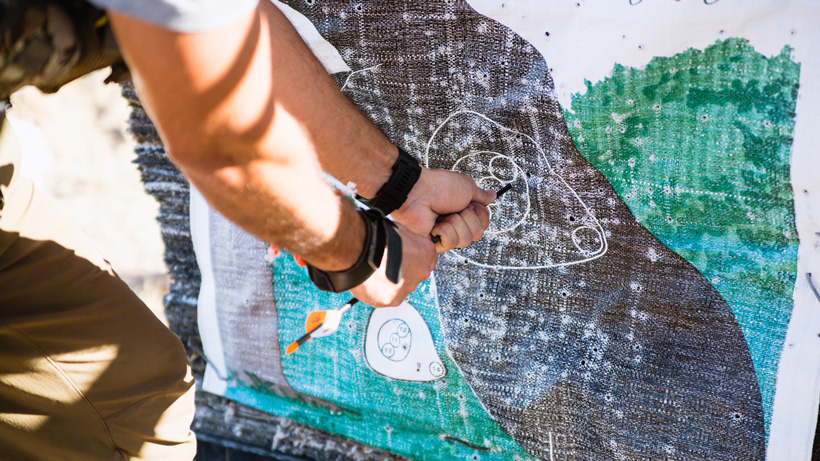 Before we start trying and buying arrows, we need to ask ourselves what we are planning to hunt. This is going to lay a foundation for what we need out of an arrow. Down here in Arizona, I have the privilege of getting to hunt coues deer on a regular basis with my bow. These little deer are switched on like no other and are famous for “jumping the string.” Because of that, I am someone who does care about arrow speed. I want that arrow to get there as fast as possible, but still have decent penetration. On top of that, though, I also love hunting mule deer, elk and black bear. So, an arrow that’s too lightweight is something I want to avoid. And I don’t want to be switching arrows for each species I hunt. One arrow to rule them all I say! Do you see where I’m going here? Another question that you need to ask yourself is “What species am I looking to pursue?” Is it moose? Elk? Whitetail deer? Are you hunting a bunch of different critters? Answering these questions will lead you in the right direction for arrow selection. For instance, you wouldn’t want to shoot a super lightweight arrow at a moose. That just doesn’t match upright. The arrow is a tool and we need the right tool for the job.

Time to start looking at arrows! Luckily, there are a ton of different ones on the market to choose from. When doing this, you might notice that certain arrows are skinnier than others. There is a standard size and micro diameter shafts. Both of them will do the trick and both have their own pros and cons. 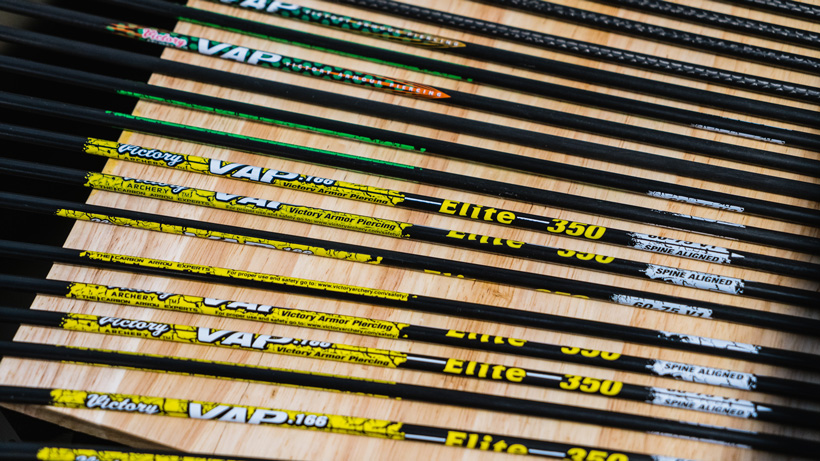 This aspect of arrow selection is crucial. By not having the proper spined arrow for your setup (draw weight, arrow length, draw length), you will most certainly have flight issues and tuning issues, especially with fixed-blade broadheads. Your draw length, arrow length, draw weight and spine all work together. A higher draw weight is going to yield more of an “explosion” on the shot than a lower draw weight. Each is going to require a different arrow flex or spine to handle such things. The spine of an arrow is the measure of its flex. The lower the number spine, the stiffer the arrow, meaning it will bend less. Also, the lower the number, the heavier the arrow. However, this number is not your arrow weight. That is often confused because sometimes the numbers are similar. Another thing to note is the more length that is cut off of an arrow, the stiffer the spine will get. 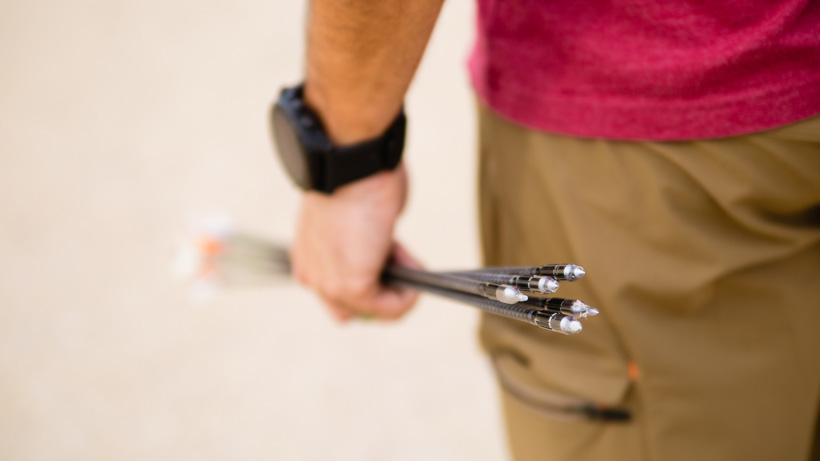 The reason that we need to get this spine business right is we want the arrow to recover after the shot. Have you ever seen an arrow shot out of a bow in slow motion? It flexes every which way quite a bit. If an arrow is too flexible for a setup, or under-spined, it will over-correct itself, resulting in bad arrow flight and groupings. If an arrow isn’t flexible enough, or over-spined, it will under-correct itself, which causes bad arrow flight and groups. There are all sorts of arrow spine calculators and charts out there to help with the process, but the best way to figure all of this out is by going through the tuning process. Paper tuning is a great way to see how your arrow is coming out of the bow and will help shine a light on whether your arrow has the correct spine or not.

I’ve mentioned arrow weight a few times throughout this piece. Arrow weight is going to have an impact on your speed and penetration downrange. It’s measured in grains and accounts for all parts of the arrow (tip, nock, shaft, outsert, fletching, etc.) Each of us have our own wants and needs with regard to our bow setup. Lighter arrows are going to be faster with less penetration and heavier arrows are going to be slower with more penetration. I’d consider a heavy arrow at 550+ grains and a light arrow at 350 grains. Are we looking to build a setup for speed or for penetration? This is going to depend on what you’re hunting and how you’re hunting. 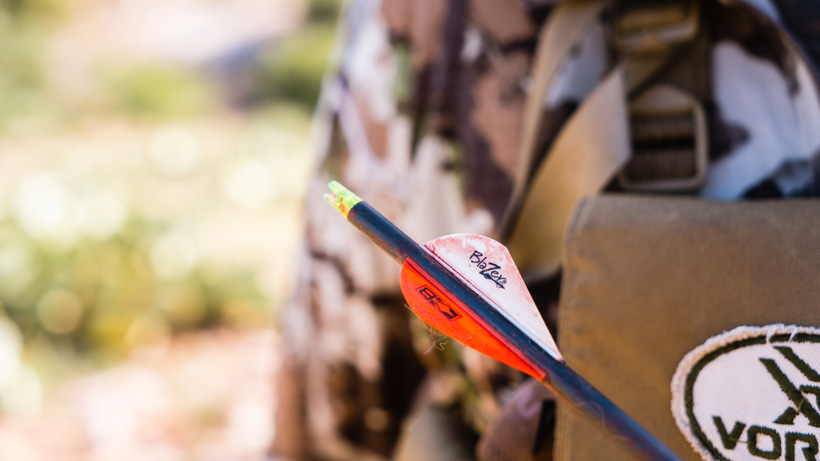 In the end, all of this stuff works together. Your spine affects your arrow weight, arrow weight affects your speed and the animal you pursue is a reflection of all of it. It’s a recipe, you see? The best arrow for bowhunting is a mirrored image of what you need as a bowhunter and your style put together. This is a bit more than just grabbing a box of arrows and calling it good. It will pay off by putting stock in the right arrow for you, your setup and your needs as a bowhunter. For instance, a spot-and-stalk hunter in open country might be faced with further shots. A quicker arrow might be in their best interest. Compared to a hunter pursuing elk in dense timber who might be more concerned with having a heavy arrow for better penetration and not care as much about speed. Remember that you don’t have to overdo it. There are a lot of folks out there—and good on them—that pay an exuberant amount of attention to their arrow setup. However, sometimes I feel like they forget about the whole hunting part of all of this. Some are even first time bowhunters, which slightly pains me. Bowhunting is so much more than just tweaking gear. All of the little things don’t matter if you aren’t in the field getting those arrows dirty.