Thinking outside the box on a bowhunt 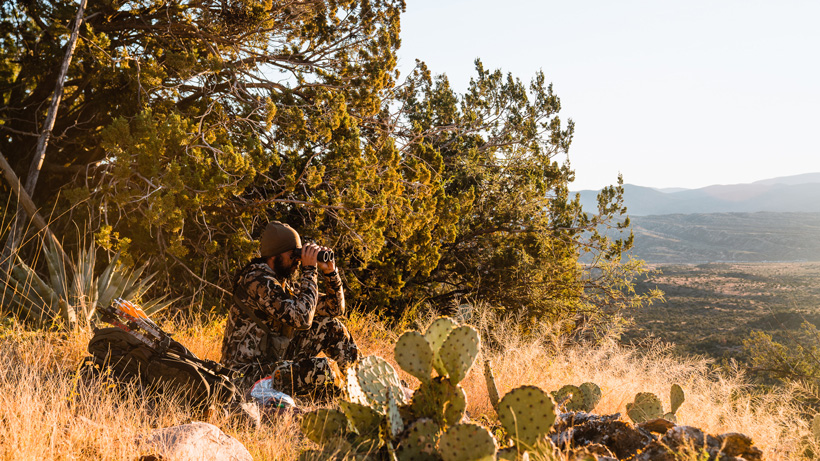 From the start of when you pick up a bow and head into the field, I am a firm believer that we are conditioned to adhere to a certain set of rules. Whether it’s rules set in place by a mentor, or rules set in place by consuming the various forms of content out there. These hard learned lessons from experienced bowhunters are ones that mean well. They can be anything from keeping the wind in your face to always coming from above when stalking an animal. When someone writes an article or gives advice it is 100% with good intention. However, because bowhunting is such a difficult task, I’m also a firm believer that some of these rules can cause us to not think beyond them. They act as a boundary of sorts set in place for us to avoid failure at all costs. And that is something that will limit our potential in the field. Just because “so and so” does things a certain way, doesn’t mean you have to. Rules are made to be broken.

You don’t have to come from above…

Traditionally, when it comes to stalking an animal, coming in from above gets the most press. For good reason too. Most of the time animals tend to bed facing downhill, which means if you were to come from above, the animal would be facing away from your approach. And with rising thermals most of the day, you’re not as likely to get winded when above an animal until they switch at least. Not to mention that being above puts the view advantage in the hunter’s favor. Coming in from above works, yes. It’s not the only option though. 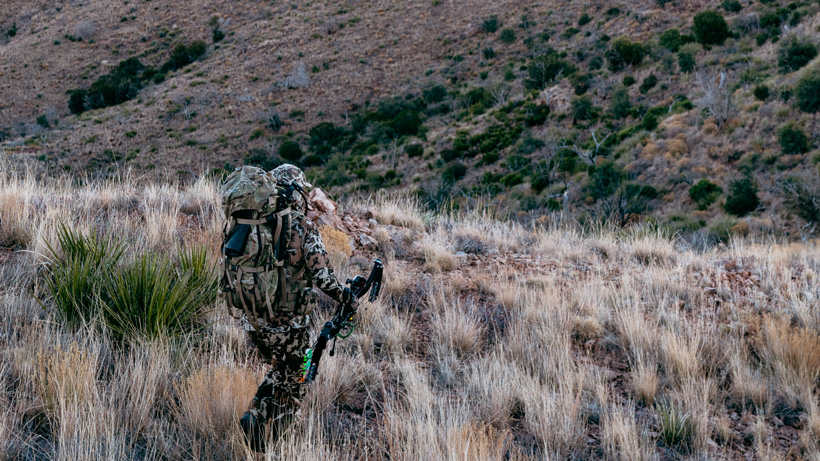 A very well accomplished bowhunter gave me some advice early on. We were chatting about thermals and moving in on critters. One of his tactics was to not even worry about thermals and come in sidehill on the same elevation as the animal. Doing so eliminates the chance of thermals busting you. Of course, you still need to have a good directional wind, but the fact remains. This method usually provides a good deal of cover as well to hide an approach. Remember: the animal might not be looking directly away from you going this route. Coming in sidehill would be a much better option for an evening stalk than coming from above. I’ve been the guy sitting above a bedded deer in the evening only to have the thermals switch on me and send the deer bounding away. Sidehill would have killed him.

When I first picked up a bow and even considered bowhunting, I remember seriously thinking about how impossible this all sounded. Getting into range of an animal and putting an arrow through one sounded like something that would only happen to the luckiest of folks. It was a paranoia really and one that carried right into my adult life. I’d often not go after animals because I was afraid of getting caught. I’d sit back and conjure up all of the things that might go wrong and they’d add up, leaving me sitting there wondering what could have been. Bowhunting might sound like walking on eggshells — and there are times that it is — but it’s not always about being timid. 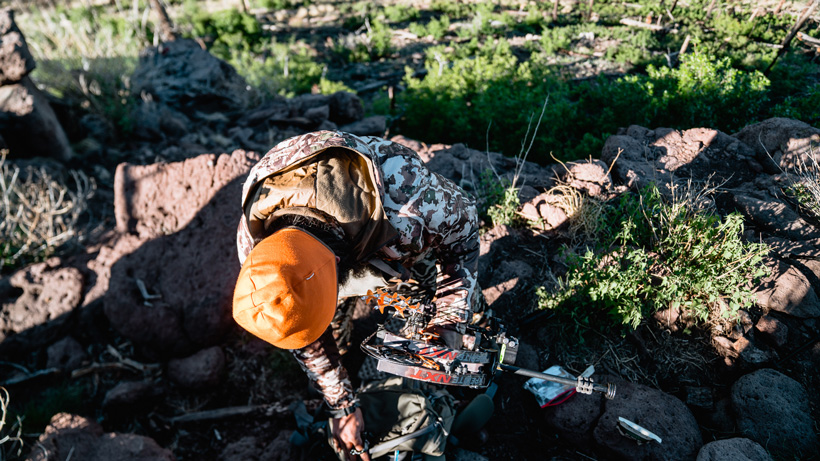 The timid tendencies would continue until a veteran bowhunter divulged a secret to me. He said, “Josh, I just go right at them.” There was no overthinking and no fear of those eggshells. The guy would grab the wind and start getting close. His endless Kodak photos of him kneeling behind critters was proof that being aggressive had its advantages. Since that conversation, my opportunities behind a bow have gone up significantly. I’m not saying being meticulous doesn’t pay off. I am saying that there is a time and a place for it though. Don’t be afraid to just try to close the distance from the get go. You’ll likely learn something. 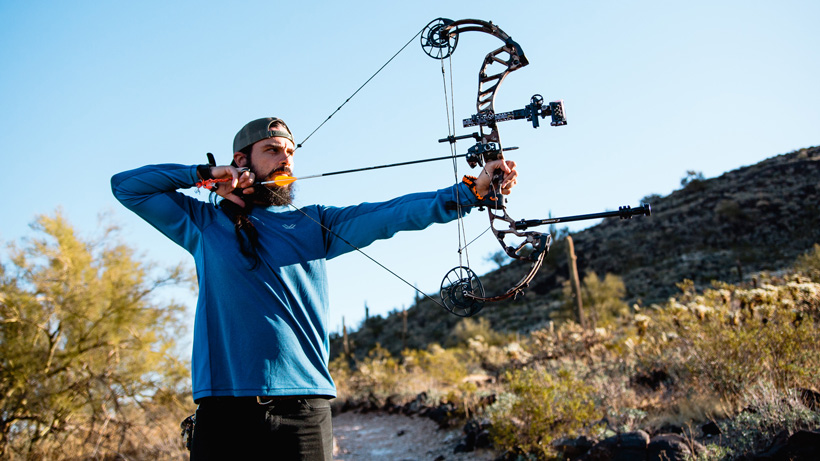 Bowhunting has always been about getting close and there really is nothing like it. Being a stone throw away from a big buck is a heart pounding experience that’ll leave you crawling back for more time and time again. All of that said, sometimes getting close is not the best approach. Animals are more likely to jump strings and are much more likely to be on edge, which has a tendency to put us on edge. This can cause hasty shots which usually don’t end well. Staying farther back can provide for a more relaxed situation overall. Shooting at an animal that has no idea you’re there is much better than when they’re staring at you. That’s not to say that you can’t go undetected at shorter ranges, but it’s just less likely because the veil is thinner. I recently heard a very well respected bowhunter say on a podcast that he’s got friends that won’t even consider shooting a Coues deer closer than 80 yards. There is a reason for that. So, just because this has always been about getting close, it doesn’t mean you have to get as close as possible. Know your limits, yes, but don’t disregard dialing that tape out.

Still hunting with the wind

I know this sounds crazy, but hear me out.  Years back, I was sneaking my way along the edge of a bluff heading back to my truck. Now, I had done this first thing in the morning going the opposite direction with the wind in my face. So, I was basically going back the way I came at this point. However, this time the wind was at my back. Because of this, I thought there was a fat chance of me running into anything critter wise. To my surprise though, I had a deer walk right past me at 40 yards. She was working into the wind and off to my side. That deer never looked at me or smelled me. This got me thinking. 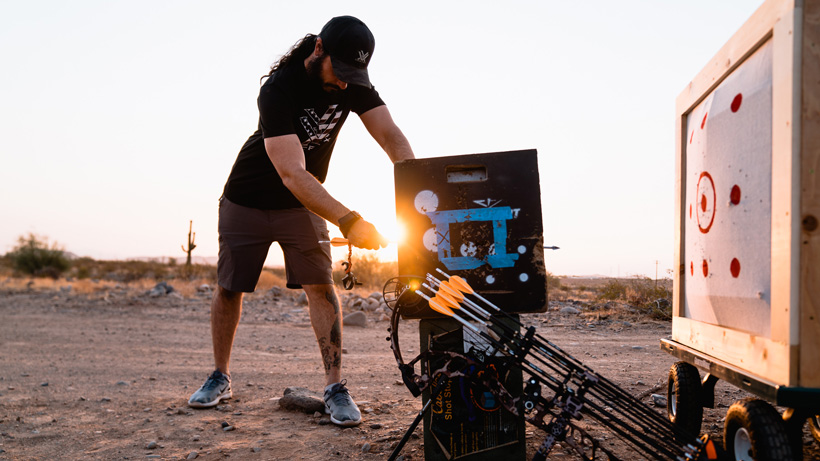 Because of the cliff to my left and me walking along the edge, it put my wind out of reach from animals to my right. Critters will often work into the wind to smell any potential danger ahead. My assumptions were this is exactly what that deer was doing. Since that day, I’ve successfully used this method of still hunting with the wind and walked my way into more than a few animals. It only works under certain circumstances, but the fact remains. It works and can be used to make the most of your time out there. Doing this successfully requires prior knowledge of the area. You need to know where animals are feeding/bedding and that your wind isn’t blowing directly into that. Stay on the edge and let your wind blow past them. Anything working into the wind will be essentially walking right towards you off to your side. The cliff is a great example of this because my wind was either blowing directly in line with the cliff or off of it. This left the whole feeding area to my right in play. 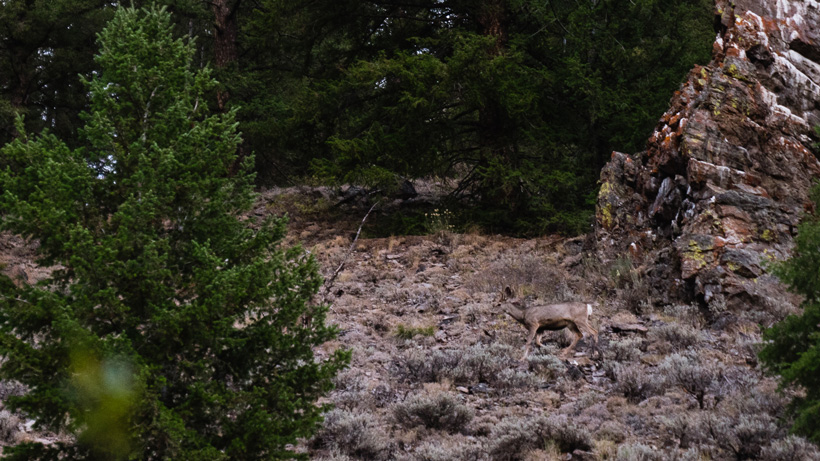 One of my reasons for wanting to write this piece is to explain that bowhunting is not a cookie cutter activity. You shouldn’t just do things because “that’s how you’re supposed to do them.” If you think shooting a 600 grain arrow is foolish, then don’t do it. Use the arrow that you’re the most comfortable with. If you want to hunt whitetails on the ground spot and stalk, then do it — despite everyone else being up in a tree. One of the most beautiful things about bowhunting — and any hunting for that matter — is it’s an art. Each one of us paints our own picture and there is nothing wrong with adding in your own flare.