Spot and stalk bowhunting - going the extra mile in prep 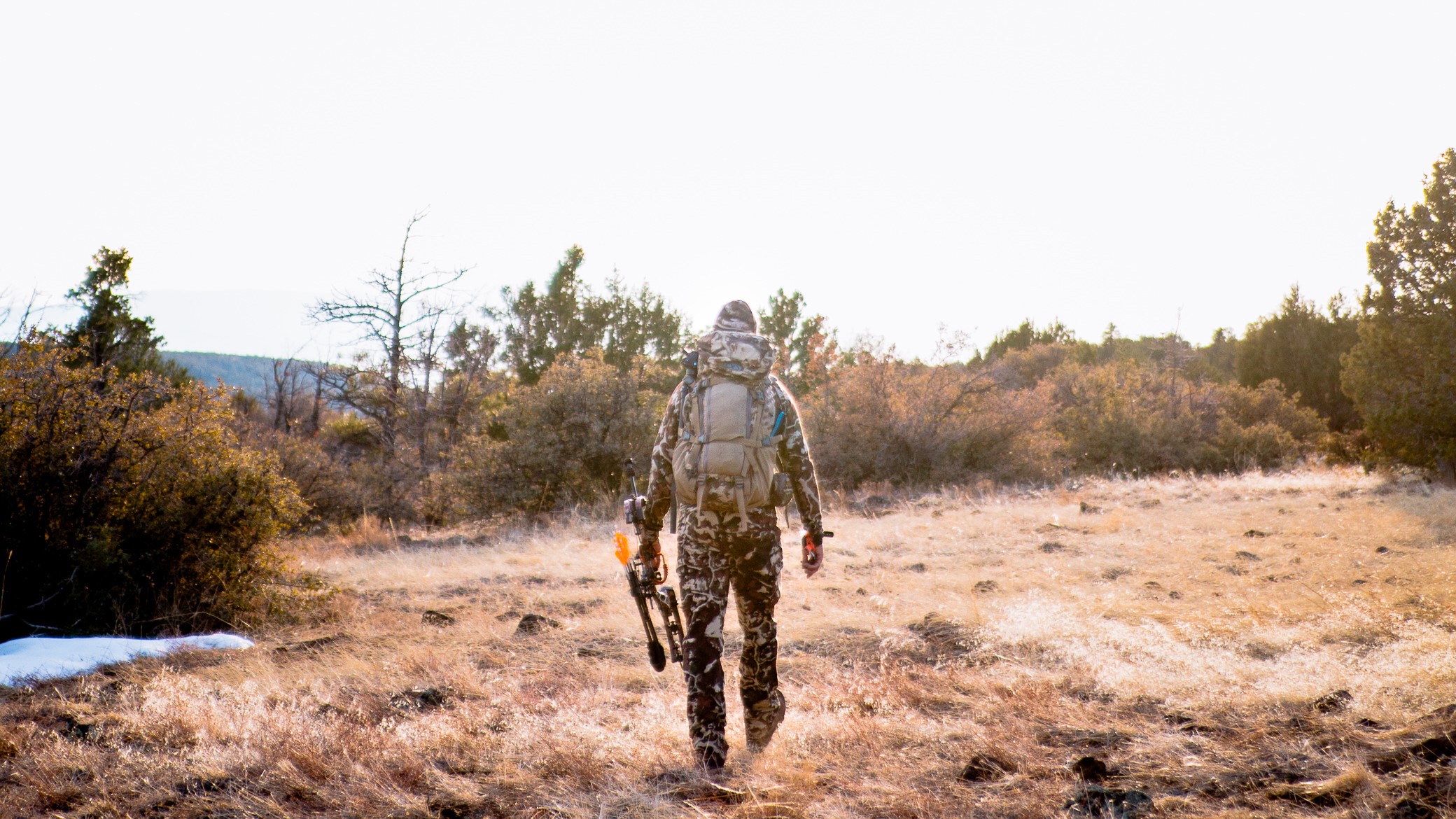 Across the West, the standard success rate for bowhunting is quite low. It is the standard to go on “bow hikes” and eat tag soup later in the fall. This is especially true for spot and stalk bowhunting where you’re the one maneuvering towards the animal. You’re in the driver’s seat and if you’re not willing to truly learn how to drive well, you increase your chances even more of crashing. There is also a standard in how to prep for these hunts. Most folks seem to pick their bow up a month or so before season to start shooting. They seem more worried about finding animals than having the skill to close the distance. And most dismiss the little things it takes to notch an archery tag by way of spot and stalk. There’s more than meets the eye though on preparation and they’re only learned through doing.

Many of you before early season — myself included — head out into the backyard and shoot as comfortable as can be. The ground is level. There’s no distractions. All there is to do is focus on making the perfect shot. I’m sure you’re great at this and smash the bullseye over and over again. Yet, what is perfect now is not going to be perfect in the field. Sneaking up on an animal forces you to put yourself in awkward positions, which often leads to awkward shooting. Maybe it’s having to bend down a little bit to make sure you clear a branch on a shot. Or maybe it’s blindly aiming at vitals through a bush, knowing your arrow will arc over the vegetation and hit your mark. These scenarios are a far stretch from the blissful shooting we experience in our backyards or at the range. I urge you to invite some of these less than perfect scenarios into your practice. Shoot in awkward positions and challenge yourself to mimic the challenge of spot and stalk bowhunting. 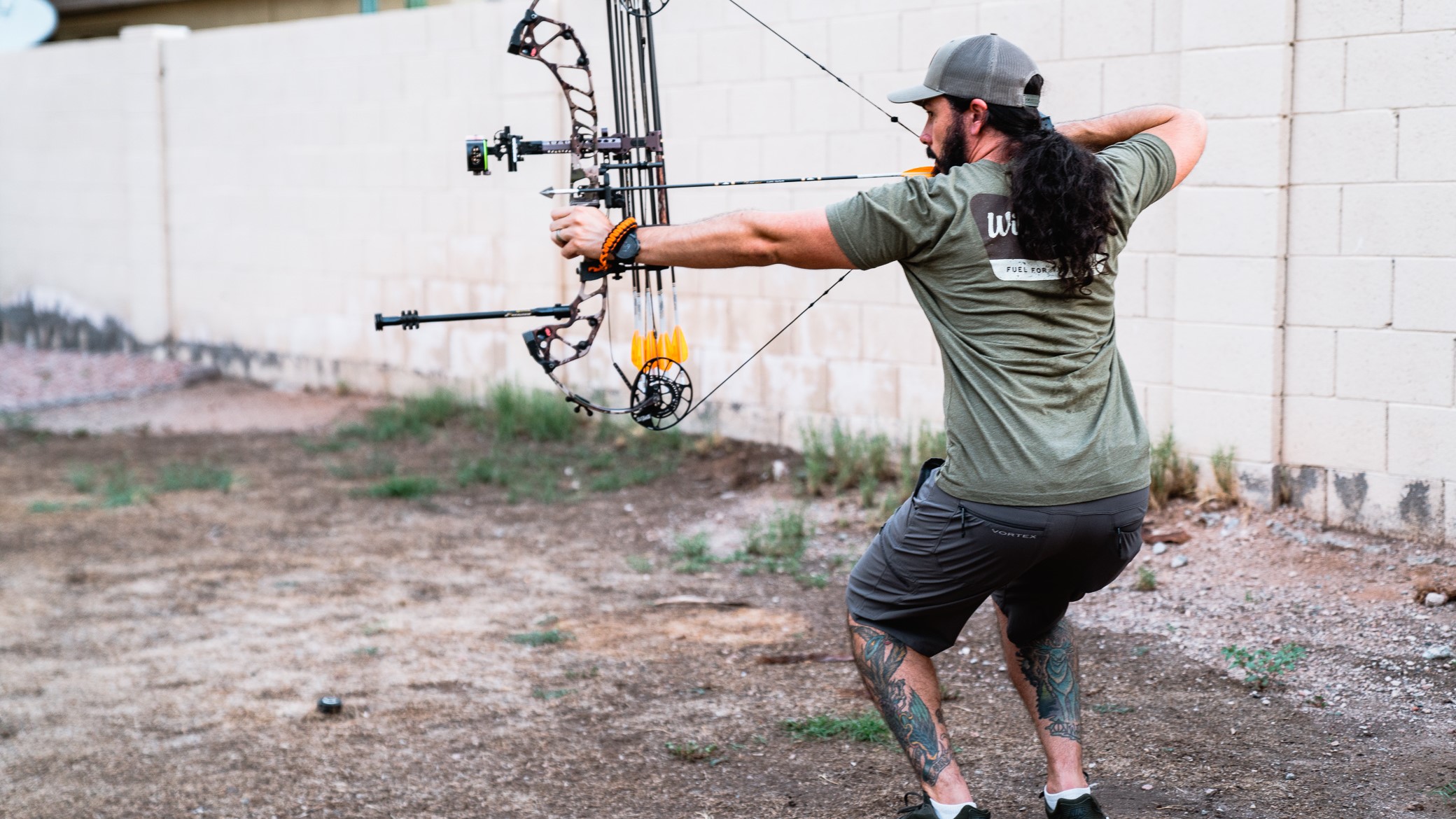 On a recent training hike, I noticed a buddy of mine always taking the easiest route on the trail without a care of being loud or not. This bumbling carried right over into a bear hunt. Luckily, I nipped it in the butt and we were able to kill the bear. What I brought up to him on the next training hike was trying to take the harder route of the trail on purpose. And paying attention to how loud he was being. I told him to notice when and where it is more quiet to place his foot. This is practical training for spot and stalk bowhunting. A simple exercise, but extremely effective once in the field. Know how to be quiet in uncomfortable terrain. Pay attention to it ahead of time and it’ll be second nature as you close the distance.

Ease up there, cheetah

The next time you’re at the range, pay attention to the other folks shooting their bows. More particularly, notice how they draw. Most people that I’ve seen at least tend to draw their bows quite aggressively. It doesn’t look like they’re going to pull the string off the cams, but the movement is definitely more than minimal. And the thing that will bust you second to the wind is movement. Animals pick up on it quite well. 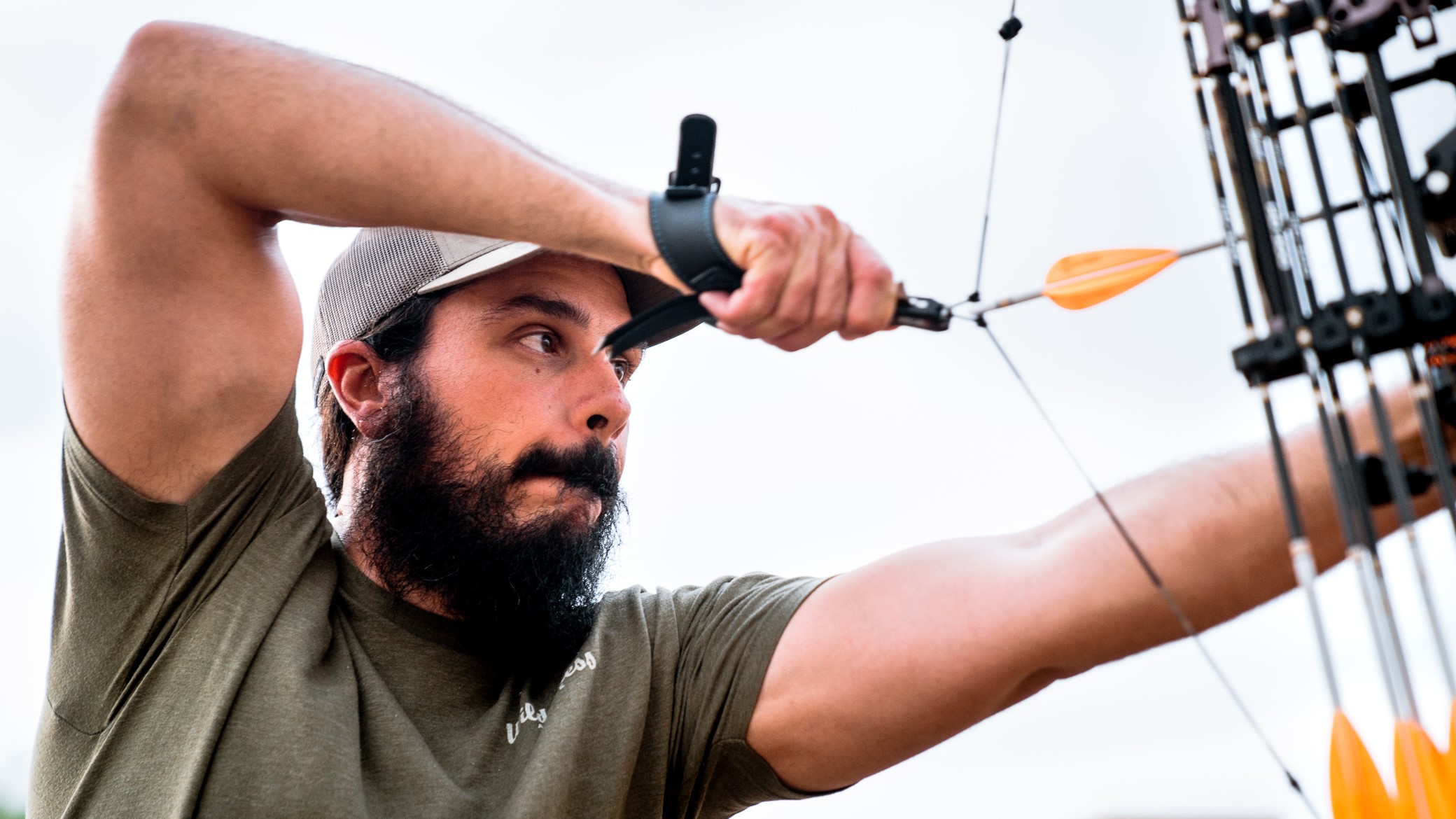 To elevate your performance in the red zone, practice drawing your bow slowly and without pointing it at the sky first. Hold the bow straight out in front of you and slowly pull the string back to your anchor. If you can’t do this comfortably, you might think about lowering the poundage of your bow. It would be a shame for everything to be going right and then that velvet mule deer catches an exaggerated movement like drawing a bow back. Ease up there, cheetah. Slow and steady wins the race.

It was late December and the mule deer rut was in full swing down here in Arizona. I had a good buck spotted and started making my way over to him. Him and his does were posted up in the bottom of a small cut, giving me the perfect opportunity to come in from above for a shot. Everything was working out great once I got over there. I had the wind and the deer were unaware of my presence. A measly 20 yards was all that stood between me and looking over that edge. Step by step I got closer. And then, in what seemed like slow motion at the time, I began to fall over. Yup, I fell right over. The deer ran up and over the ridge out of my life. Funny, but there was a lesson underneath the comedy of the situation. 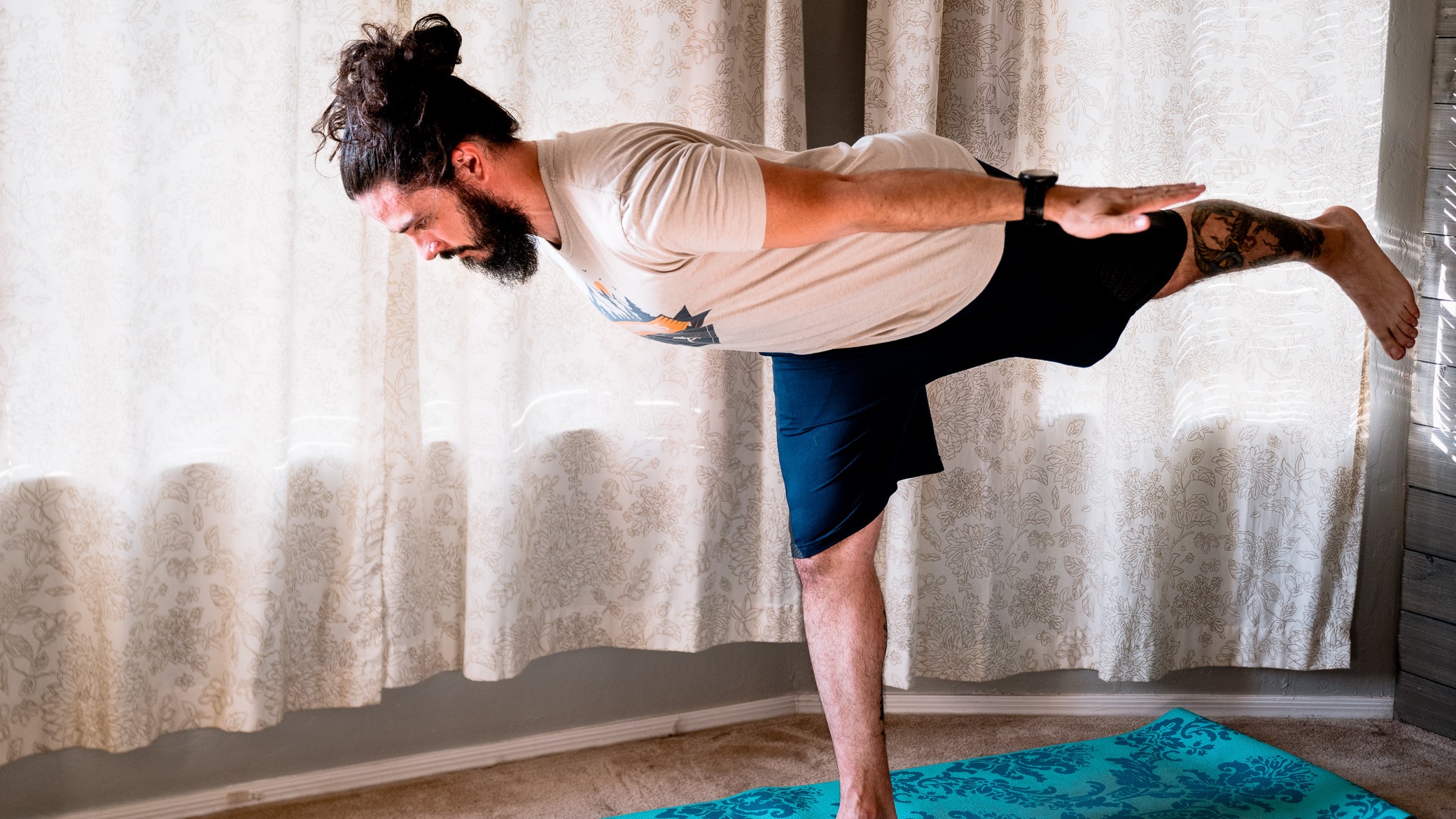 The lesson here was that I needed to work on my flexibility and balance. Moving slowly and fluidly is actually pretty difficult. It sounds easy, but not everyone can do it effectively. In order to improve this in my arsenal, you ready? I started doing yoga with my wife. As hippie dippie as it may seem, trust me, it’ll help. You’ll push your flexibility and balance tenfold by participating in it. Slow and fluid movements take practice and a different kind of strength. Yoga can get you there. Spot and stalk hunting requires a delicacy that most are simply not used to.

If one thing is true when it comes to shooting a bow, it’s that we don’t like to miss. Having a rock solid range every time lends to that. Knowing the exact yardage of a target or animal provides a high level of confidence on the shot. In the perfect scenario, that elk will walk out broadside, let you range him and then an arrow would be headed his way. However, bowhunting is rarely perfect. Some folks will head to the archery range and test themselves at guessing yardage. This is great. However, I’d one up that and tell you to test yourself in the field. Our depth perception can change in different environments. Try to guess the yardage of random things while you’re actually hunting or scouting. After the fact, hit it with your rangefinder to see how you did. Often, things look closer than they are. By doing this, you’ll familiarize yourself with what certain yardages look like in the setting you’ll be hunting.

I recently wrote about this tip in a scouting piece, but think it’s equally important to mention here. Knowing how long it takes to reach certain landmarks within the area you’ll be hunting can be a game changer. Literally, it could mean the difference between filling a tag and not. So, whether it’s scouting in the pre-season or when actually hunting, take notes of the time between certain destinations or terrain features. Going on a stalk, I’ll check my watch at certain landmarks between me and the animal. This gives a much better perspective on the country. Many times we think that things are much farther away than they are. This can result in not even going on a stalk. You can’t win the game if you don’t play.

Hone it and own it 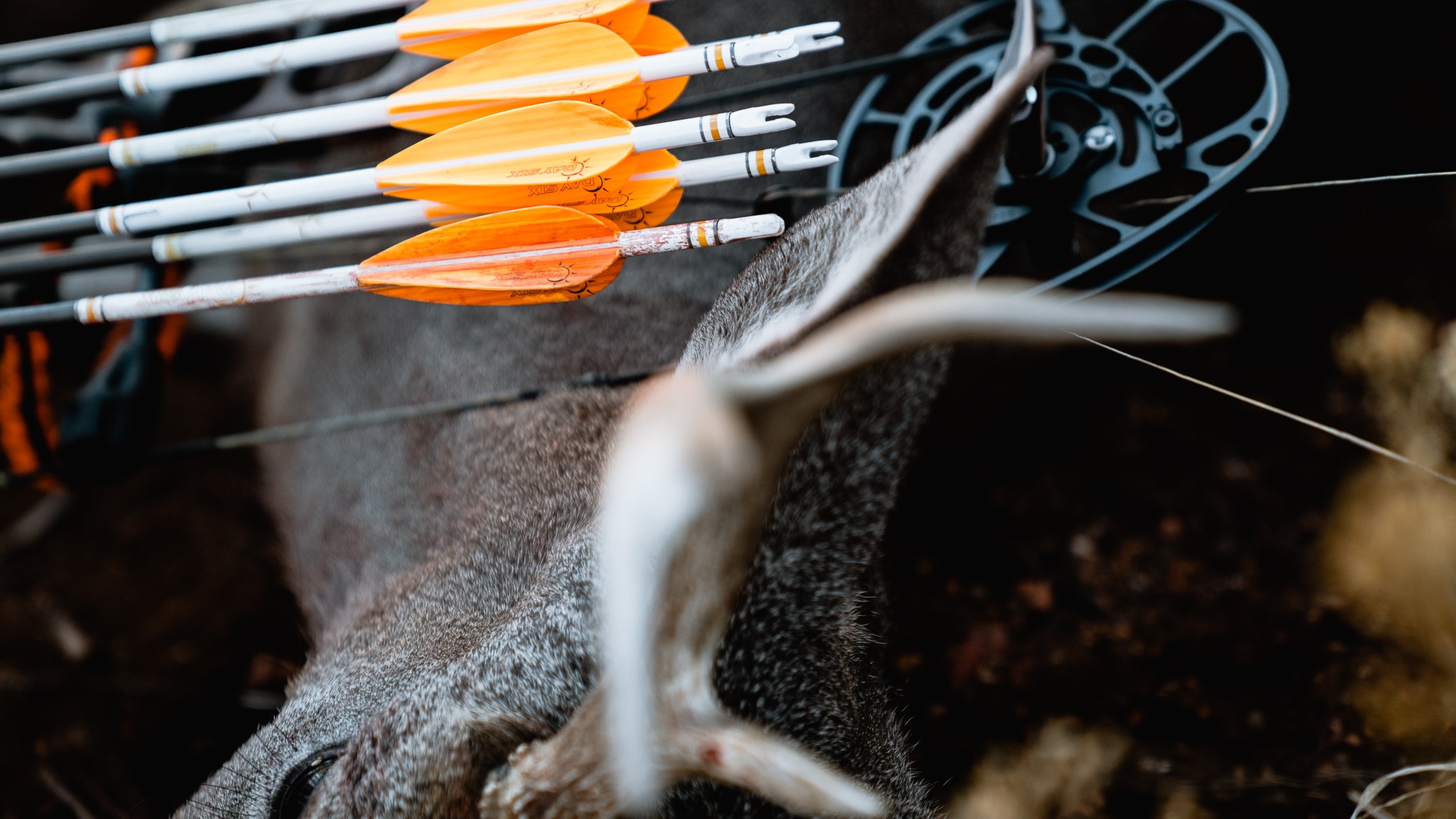 A lot of little things have to go right in order for a spot and stalk archery hunt to end in success. Wind direction, guessing yardage, not going too fast, not falling over (little jab at myself there). So, it only makes sense to pay attention to little things in our prep as well. They are all part of the chain of success. A building is built brick by brick. The standard of just being a good shot and being fit is not enough. There’s more to it than that. If you can’t move slow enough to go undetected, you’re done. If your good shooting doesn’t translate into awkward positions, you’re done. And if you want standard results, put in a standard amount of work. Go the extra mile in prep, so you will succeed that much more in the field.