Should I shoot an index or handheld release? 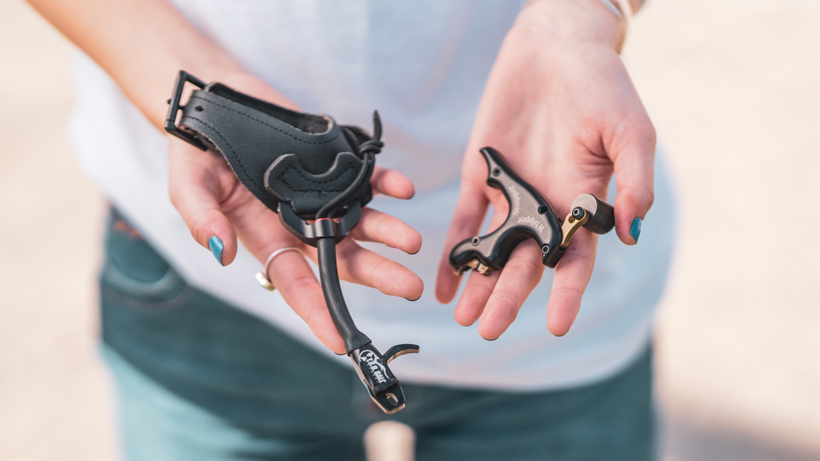 Before we dive into the good stuff, I’d like to touch on how I got into bowhunting. Growing up in Las Vegas, I always felt like I was supposed to be born and grow up in a different state like Montana, Wyoming or Colorado. Just somewhere that wasn't Vegas. I've always been interested in the outdoors, whether it was fishing, frog gigging, hiking, shooting guns with my grandpa and learning range safety, or even going out in the middle of the night to shoot rabbits with my big brothers. When I was 14, I found out that my brother, Cody had a compound bow and of course, my next thought was, "I want a bow too." I wanted to be just like my big brother, anything he could do so could I. After two hunting seasons of me just tagging along with the boys, I decided I wanted to get into archery and bowhunting just like him.

The year I turned 15 or 16, my Grandpa Panici took me to a local sporting goods store and surprised me with my very first compound bow, a Bear Cruzer. It definitely was not the best of the best but it was a great beginner bow. That same year, I practiced every day, watching YouTube videos and visiting the local archery shops around Las Vegas for guidance on proper form and technique. Soon after months of practicing, the Nevada application season opened up and my brother helped me apply for everything archery and when the results came out, I got my first tag, a Nevada antelope horns longer than ears tag. Long story short, that August, I harvested my first ever big game animal at about 12 yards! Yes, you read that right, 12 yards. It was a crazy overwhelming experience I shared with my big brother and our good friend Carson. Tears of happiness were flying that's for sure.

From there, like many of you may know, the addiction grew from there. I wanted to be surrounded by archery in every aspect of my life and so that’s what I did. I found a job at a local archery shop in Vegas. I started from the bottom cleaning the range to helping customers, learning about releases, sights, why this one, why that one, I shot almost every bow in that archery shop and eventually became an apprentice bow technician and instructor for people who wanted to get started shooting just as I did.

Now that we have some background out of the way, let’s talk about the pros and cons of handheld releases and index releases. 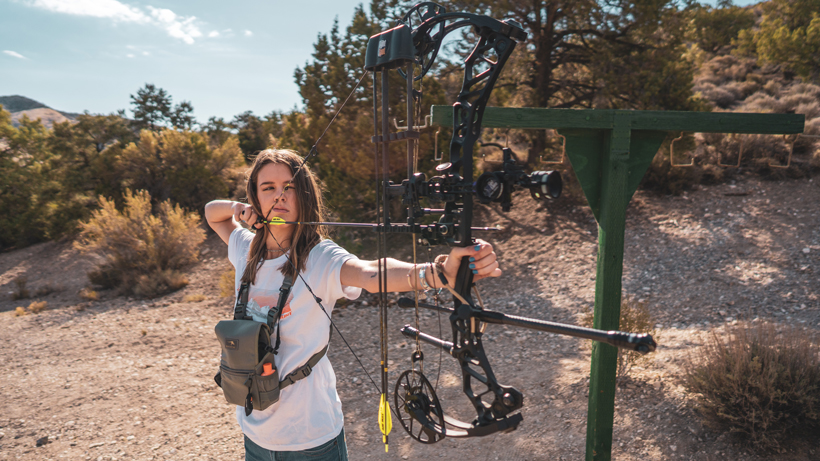 Like most, I started shooting with an index release. It’s less complicated, easy to use and definitely not as terrifying as a handheld release. Index releases are great for beginners, especially if you are just getting into archery and shooting a bow. Having the wrist strap provides a sense of safety by helping pull your bow back a bit easier and it also decreases the chances of accidentally letting it go mid-draw, or even worse when at full draw which could just as easily lead to an ER visit if you’re not careful, as long as that pointer finger is behind the trigger!

Starting out with an index release means there is one less thing to think about in developing your shot process and that way, it is much easier to start building a foundation focused on your form, anchor point, and follow-through (which are probably some of the most important keys in success to having great form which leads to great shots and consistently in those shots).

With using an index release, one con is there is only so much you can do with an index release. It is also easier to punch that trigger and form bad habits. Yes, you can absolutely punch a trigger with a thumb or back tension release, but with an index release, the probability of punching the trigger is higher and can lead to target panic and to put it plain and simple, inconsistent shooting. With a handheld release, mistakes are amplified which makes it easier to pinpoint what needs to be worked on and that will make you a better archer.

HANDHELD RELEASES (BOTH THUMB & BACK TENSION) 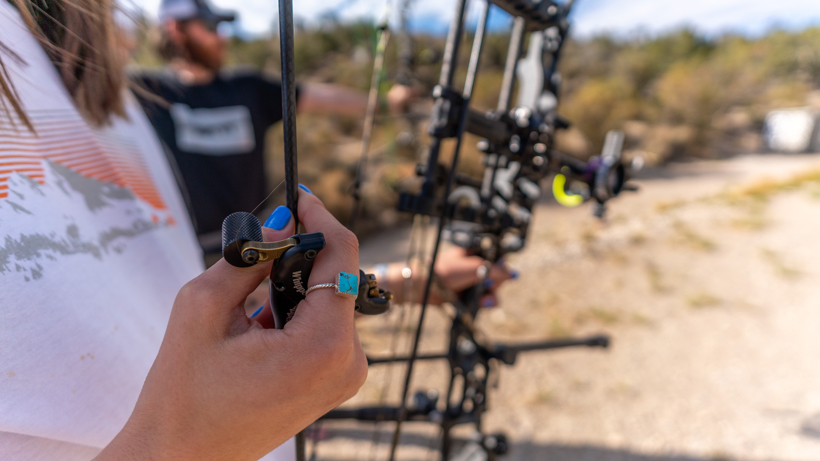 Here’s the thing about thumb and back tension releases, the ceiling to become a more accurate and consistent shooter is higher than it would be with an index release. 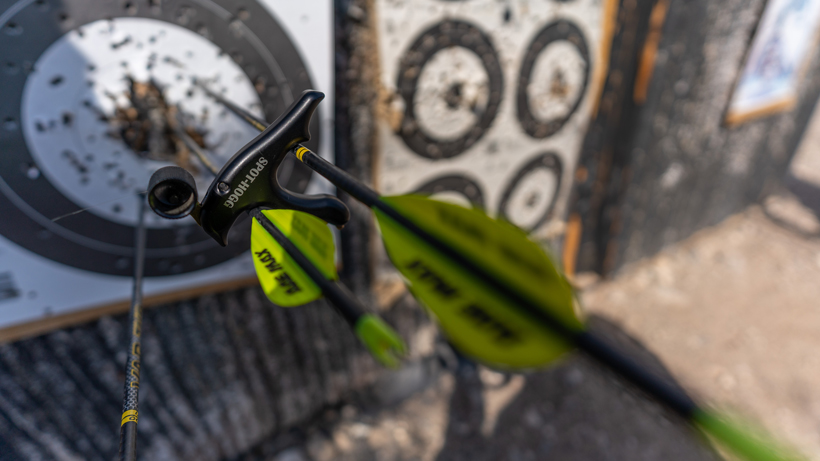 I shot with an index release for about six months before I decided to make the switch over to a thumb release. After about a month or so of reading up on them and hearing about them from top-tier archers about how great they would be for me, I started practicing with them. I am not going to lie, it takes time, patience, and practice to start seeing those groups dial in when shooting. If you can take the time to earn how to properly shoot a thumb release or back tension release, I highly recommend it. You have to stay consistent if you want to excel in shooting a thumb and/or back tension release.

The first con that comes to mind when thinking about shooting with any handheld release is that the ability to punch the trigger is still there, just like any other release. If you don’t take the time to focus on follow-through and learning how to properly shoot a handheld release the chances of punching the trigger is there (just like shooting with any other release) and can lead to target panic which is what I want to avoid at all costs. The learning curve is also a bit prolonged compared to an index release. It takes some time to get used to shooting a different way. 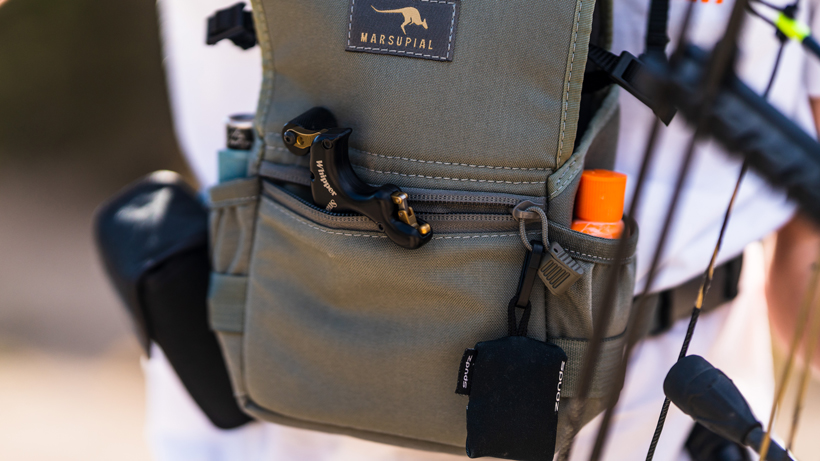 Another downside to this type of release is when you’re in a hunting situation, if you are not careful about keeping your release in a safe place pretty much 24/7, there is a high probability of losing that release. Personally, I have never lost my release on a hunt (knock on wood) but that doesn’t mean it still can’t happen. I always put my release in the front pocket of my bino harness. It is easy to access and every time I pull that sucker out getting ready, no matter how hyped I get in the moment I take the time to put it back safely and securely. 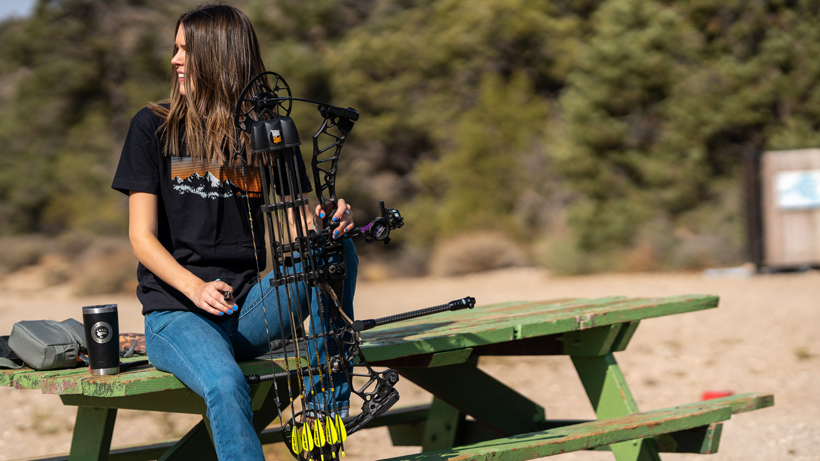 Whether you shoot an index or handheld release, every archer is different and you know what works best for you. Just to be clear, I am not trying to bag on index releases but I do believe that taking the next step and trying a handheld release just might make you a better archer. If you are looking for a change in releases or are wanting to make the switch to a handheld release, I highly recommend you do some research, watch some YouTube videos and go to your local archery shop to try out some different releases and you just might be surprised in how much you like it. In my book, if there is something that could make me a better shooter why not try it? You never know, you might just like it way more than you thought and the little inconsistencies in your shooting just might dial back in. Ultimately, it is solely up to personal preference!