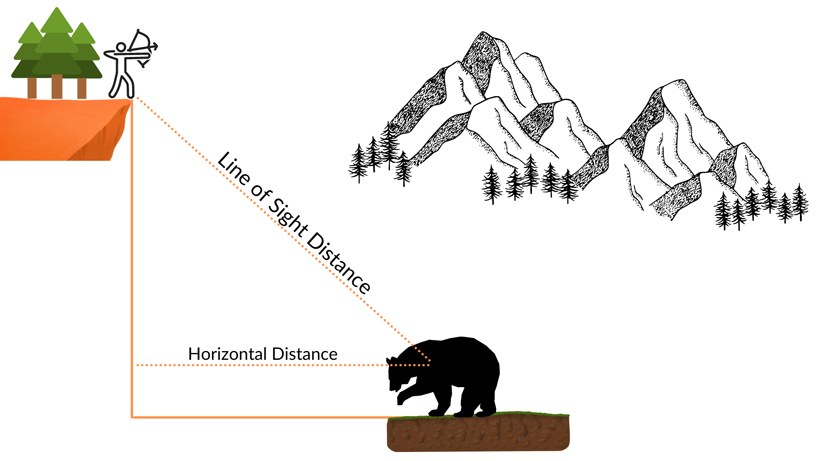 “There’s a bear,” I said to myself. A lone black bear slowly mingled his way along a bluff line just up the hill from me. With an hour of light left, I decided to make a mad dash around to get on top of that bluff the bear traveled along. With any hope, he’d be right below me upon my arrival, offering a sub 20 yard shot with my bow. As light faded fast, I crept my way out to the edge of the bluff, peering down below. The bear apparently read the script perfectly because he fed on acorns beneath my boots. Now was my time. Coming to full draw and resting in my anchor points with a bear at 18 yards was pretty surreal to say the least. Just when I thought I had this bear pegged, I watched as my arrow flew right over his back. The bear walked unharmed out of my view and out of my life.

The steep angle of that shot is what saved that bear. And if I knew then what I know now about shooting angles, I’d likely be looking at his hide as I type this. This is a prime example of why it’s imperative that we practice these things beforehand.

Line of sight vs. horizontal distance 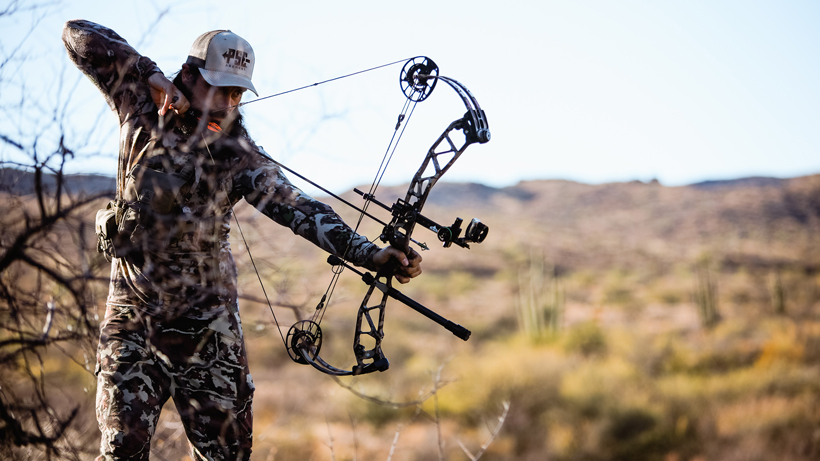 I had the yardage and everything. My rangefinder went off probably 10 times before I shot. So, why did the above happen? At 18 yards, it’s hard to miss that much. The fact of the matter is that 18 yards was my line of sight distance to the bear from where I was standing — not the actual distance I should have aimed for. This is why steep down or uphill grades often leave hunters wondering why their arrows are flying over the backs of animals. Instead of aiming for the line of sight distance, what we should be aiming for is the horizontal distance. Using my situation as an example, the horizontal distance would have been the distance from the base (bottom) of the bluff to the bear. The difference between the horizontal distance and line of sight depends on the angle of the shot. For me, it was probably around 10 yards based upon where the arrow was hitting. The arch of our arrows are much less affected by gravity when we aren’t shooting on a horizontal plane. The result is less arrow drop. Knowing the right yardage is key and what will help avoid that crushing miss in the field.

So, we’ve chatted about the difference between line of sight yardage and horizontal yardage. We know that when aiming at a steep up or downhill shot, we need to be aiming for the horizontal yardage, not the line of sight yardage. There is a bit of math that happens to arrive at this number. Doing math while our legs are shaking and a buck is bedded beneath us doesn’t sound like the most ideal of situations though. So, how do we figure out the horizontal distance in the heat of the moment? Well, the easiest way is just by purchasing an angle compensating rangefinder. Unlike the rangefinders of the past, these do all of the math for you and give the actual number you need to be aiming for. No fuss, no muss and we’re standing in front of a dead buck. 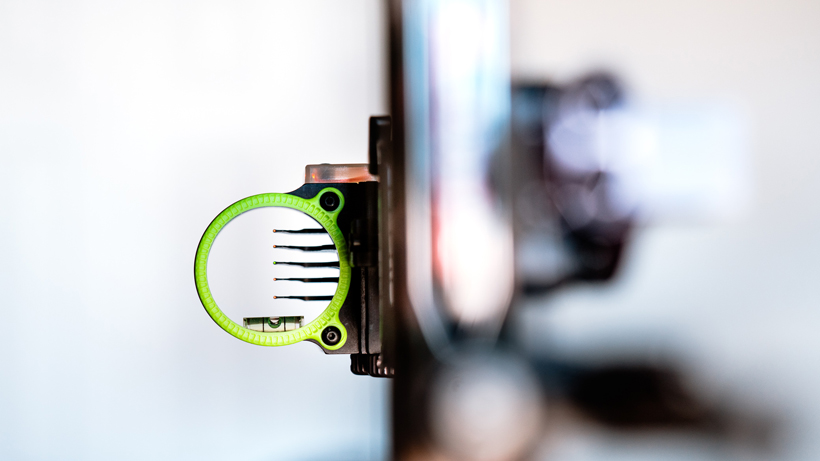 If an angle compensating rangefinder isn’t your flavor, you could also carry around an inclinometer and cut chart. An inclinometer is going to tell you the exact degree of angle a shot is. From there, you’d take that degree and refer to a cut chart to get the exact yardage to aim for. A cut chart is a great tool that will tell you how much percentage to take off of line of sight yardage based off of the degree of angle. These are things that you can find online or you could make one of your own based off of your own practice. Most folks will actually memorize these cuts to keep the figuring to a minimum while hunting.

The next option — but definitely not the most accurate — is by simply judging the horizontal distance by eye. Base your assumption off of the base of the tree or bluff to the animal — not from you to the animal. This route can be pretty tricky as it’s incredibly difficult to judge that horizontal yardage from an elevated position and much harder when judging uphill shots.

On most sights these days there is a bubble level. The bubble level helps us ensure that when at full draw, the bow is level and not canted left or right. This is important because canting the bow left or right will cause left/right misses. The arrow will always travel in the direction of the cant. So, if you’re canted to the left, the arrow will travel slightly left and the same logic goes for right cants. Hence why bubble levels are so crucial. Bubble levels need to be calibrated to make sure they are actually giving an accurate reading. In order to do this, you’ll need to first set your first axis adjustment followed by setting your second axis adjustment. I won’t go into too much detail about that, but at the end of the day, you know your bubble level is level when these are set properly. 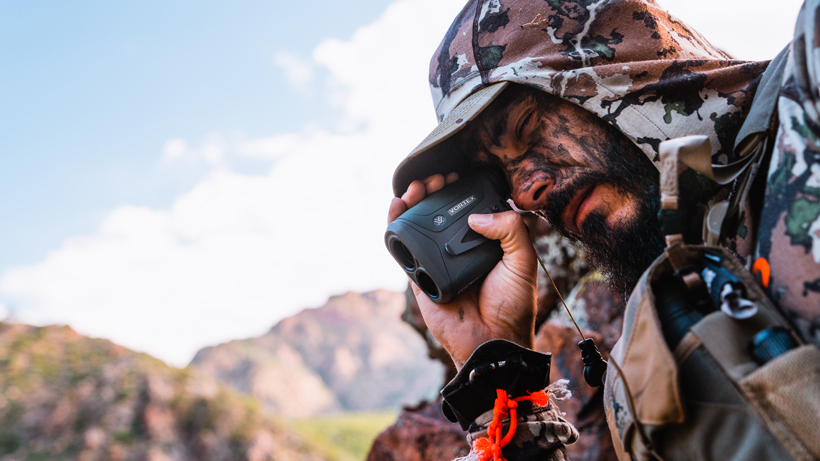 Where the third axis comes in is when we start shooting angles. In a nutshell, third axis calibration is going to enable the shooter to refer to their bubble level on down or uphill grades. The fact of the matter is that there is a certain amount of torque that is both engineered into the bow and that we are likely putting on the bow at full draw. On a level horizontal plane at full draw, we can’t see this torque in the bubble level. As soon as we change that level plane to an angled plane, though, the torque will begin to show itself and throw the bubble left or right. This makes it incredibly difficult to maintain being level and could ultimately lead to a heartbreaking miss. Hamskea Archery sells a neat little tool to help calibrate the third axis if you’d like to do this on your own. If not, get your bow into a pro shop and have them do it for you. 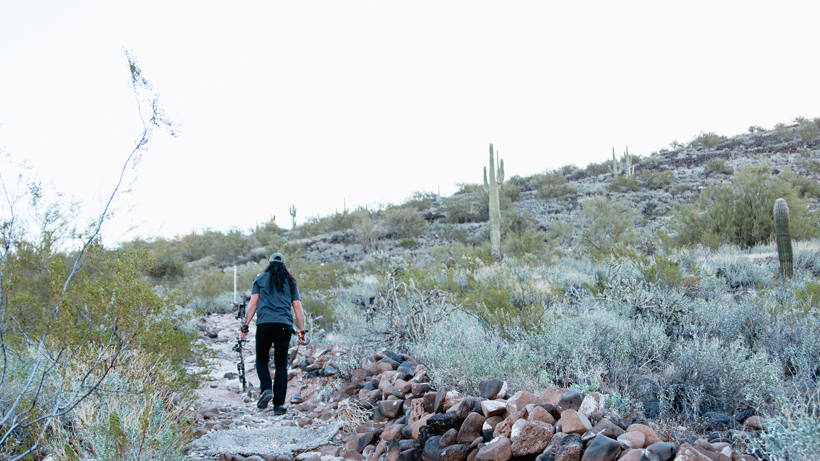 Consistency and accuracy is archery. One of the things that helps with being consistent behind the bow is our anchor points. A couple common ones are putting the string to the tip of our nose, resting our jaw line between our first and second knuckle and then using a kisser button to put in the corner of our mouth. These things and others help us return to the same position shot after shot. When we start the draw aiming downhill or uphill, all of this can change a little, which alters our consistency. So, instead of doing this, draw your bow back level just as you would shooting in the backyard. Find your anchor points and from there bend at the waist while maintaining your upper body position. Now, you know that everything is as it should be and are ready to take that steep graded shot.

The next and final piece of wisdom to note here is to actually practice shooting these angles. Go find a steep hill, bluff, etc., and elevate your practice with some perfect practice. It is very rare that we get flatline types of shots in the field. Most of the time, opportunities are less than ideal and either up or downhill. As bowhunters, we only get so many of these opportunities. That bear that I missed is a prime example. Everything I was working towards stood beneath me that evening and I botched the opportunity due to some ignorance on my part. It was a hard lesson learned, but one I’ll never forget. With any hope, you won’t make the same mistake I did and your backpack will be much heavier on your next hunt.