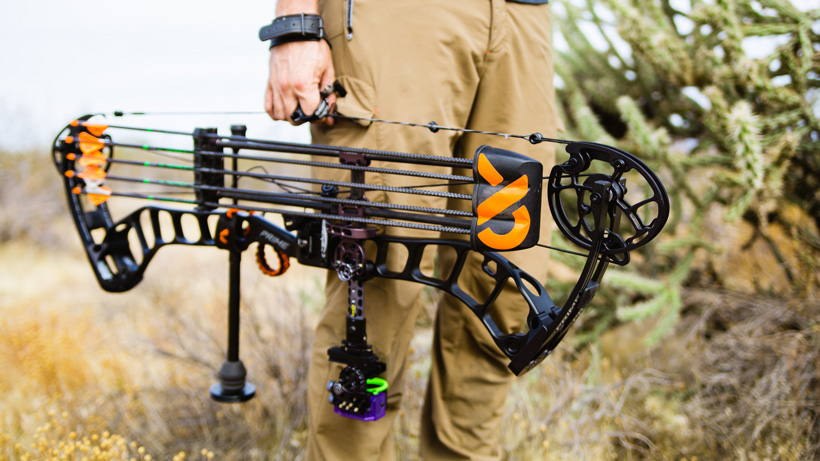 We are so blessed to live in a day and age where quality gear is so readily available. There are so many options out there that give us the tools to mold our gear to our style of hunting. It’s downright amazing. Whether you are a backpack hunter that thrives on adventure or the casual day hunter just trying to catch a break from the work week, the gear is there. One of these gear items that catches a lot of attention is our arrows. From the outside looking in, they seem pretty basic. Looks like an arrow, right? Well, there can be much more going on in those basic looking arrows than many of us know. I think it’s for good reason that they get the attention that they do. These are the last things to touch the game we seek. Once we release an arrow, it’s up to the arrow build to do the rest, depending on whether we made a good shot of course. A few terms that get thrown around in the arrow world are kinetic energy, momentum, and F.O.C. (front of center). What do they all mean for a bowhunter? How can they have an impact on results in the field? 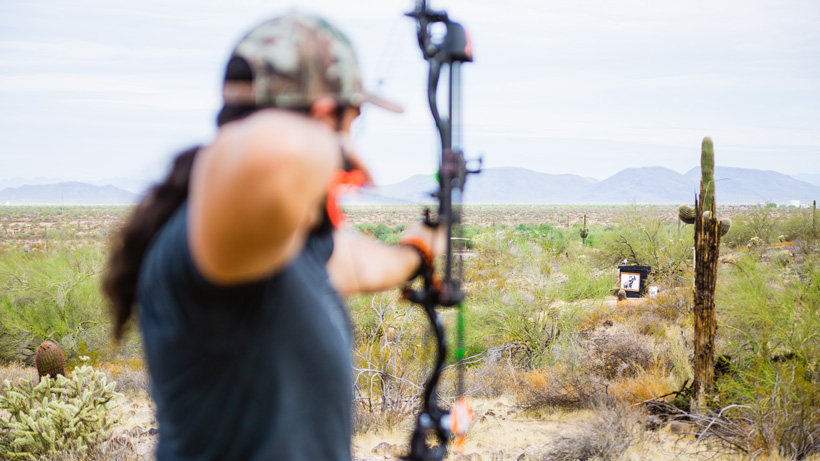 Let’s start this discussion out with kinetic energy. This is a term that gets mentioned all of the time in the bowhunting world and I might even say it’s the one that gets mentioned the most in that regard. You’ll hear folks say something like, “I’ve got 70 foot pounds of kinetic energy with this set up.” They are talking about the energy of motion. In the archery world, kinetic energy is figured out by multiplying your mass arrow weight by your arrow speed squared. From there, you’d divide that number by 450,240. I know that sounds heavy, but there are kinetic energy calculators out there that will figure this out for you in a second. So, if you’re shooting a 450 grain arrow at 279 fps, your kinetic energy would be 77.79 foot pounds on impact. For big game, you want to be 65+ foot pounds, so this set up is more than sufficient. This is separate from momentum, though. This is where I think folks get confused because they mistake one for the other. Kinetic energy is the amount of force through travel and on impact. It doesn’t account for the retained energy of the arrow that carries it through the target. That is momentum and what we’ll talk about next.

Momentum can be defined as “the quantity of motion of a moving body, measured as a product of its mass and velocity.” Momentum is measured in slugs and can be found by multiplying arrow weight by arrow velocity, then dividing that sum by 225,400. So, for a 450 grain arrow traveling 279 fps, you’d be looking at a momentum of 0.557 slugs. In other words, it is the energy that our arrows will retain after hitting a target and what will extremely influence penetration of said target. This is also where arrow weight comes into play. Lighter arrows will be faster, but their momentum won’t be anything to write home about. That speed doesn’t mean squat if the arrow doesn’t have the stones to drive home. Think of a ping pong ball versus a golf ball. On the flip side, heavier arrows are going to be slower. The slower the arrow, the smaller the kinetic energy will be. Arrow arch will be much higher and you won’t be able to shoot nearly as far either. However, they’ll retain much more energy after impact. That energy is what is needed for maximum penetration. So, what do we do? In my opinion, having a balance of both worlds is the best way to go. A balance of kinetic energy and momentum for the best results; speed and carry through power.

There are, indeed, other ways to influence our arrow performance and one of them is F.O.C. or front of center. This can be defined as the percentage of the arrow’s total weight at the front of the arrow. You know, the business end with the broadhead. This difference in weight can easily be seen by balancing your arrow on your finger. Try it if this is a new topic for you. A small part of you might think that the arrow should balance on your finger right in the center of the shaft. After trying this out, I’m sure that you can see the balance point is actually a little more towards the front. Don’t worry, your arrow isn’t broken. This is what you want. An average percentage of F.O.C. is going to be around 12% with a 100 or 125 grain broadhead. To figure this percentage out, take the arrow length from the base of the nock to the end of the shaft and divide it by 2. From there, you’re going to want to find that balance point on the arrow we talked about. Mark that and measure from there to the throat of the nock. Take the center of the arrow measurement, which you found out in the first step, and subtract that by the balance point. Now, multiply that number by 100. Divide that number by the arrow’s overall length and you land on the F.O.C. of the arrow. Or, if you want to skip all of that, just find an archery calculator online and be done with it.

For a detailed step by step look at FOC, you can check out this great article by Dave Barnett on FOC that is full of photos of this process. 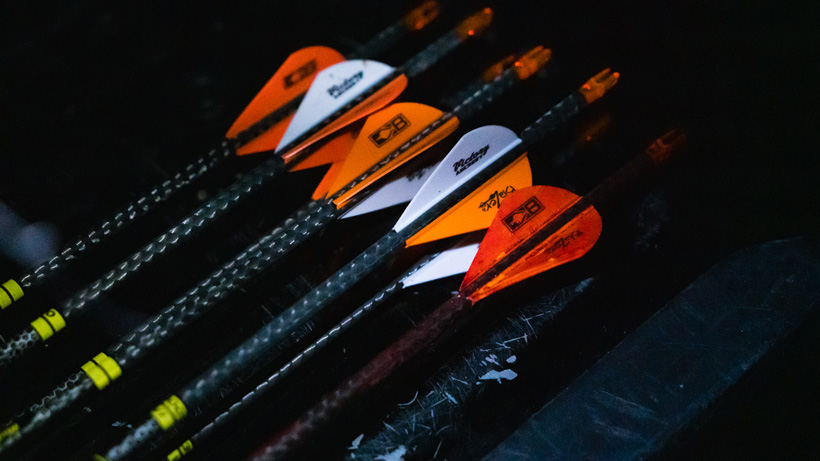 F.O.C. is a pretty hot topic right now (probably deserves an article in itself) and, specifically, extreme F.O.C. Folks are trying to push the limits and take that 12% and turn it into 20%+. The thinking behind this is that the heavier point weight will pull and guide the arrow through its target. Sounds awesome, but there are consequences to such things. Spend enough time in a pro shop and you’ll hear the archery techs’ frustrations with customers not understanding why having extreme F.O.C. might not be the best thing for their set up. Something to keep in mind here is that the higher the F.O.C. the weaker the spine of the arrow becomes. Our arrows flex when we shoot them. An arrow that is under-spined, or flexes too much, will not recover as quickly in flight, causing inconsistent arrow flight. This can be extremely frustrating when grouping. How to remedy this is going with a stiffer spined arrow. Problem solved, right? Yes, but now we have an arrow that is much much heavier than before, which is going to take away from our speed, which then has an effect on our kinetic energy. Of course, grains per inch also comes into play here, which is how you might remedy the issue. Is it needed, though? In my opinion, there isn’t a huge advantage to it, but if you’d like to take a whack at it, swing for the fences. 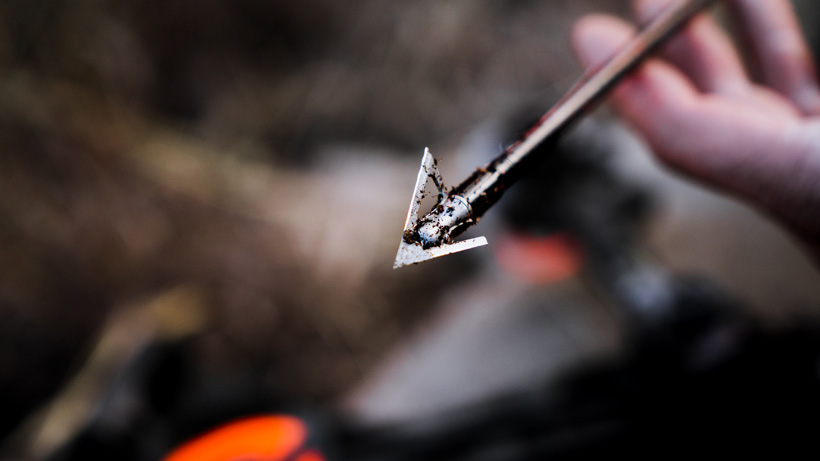 So, what is the consensus after all of that? I hope what you got out of this is that all of these things work together. There are many ways that we can manipulate and mold our arrows to what we want. Each action has a consequence, though, whether we’re talking about upping our kinetic energy or increasing our arrow weight. Take this stuff and apply it to your own setup. Listening to what works for other people is all fine and dandy, but they are not you. I hear stories about folks coming into pro shops and telling the techs that they want a 600-grain arrow, but they don’t necessarily know the why behind that or how that’ll affect everything else on their bow. It’s just what they maybe heard on a podcast or something. Archery and bowhunting is a personal thing. Find out what works for your particular setup and go from there. If this is all new to you, then I’d strongly suggest going to a reputable pro shop that can guide you along the way on your bowhunting journey. Bottom line? Tailor your arrows to you. Nothing more, nothing less.