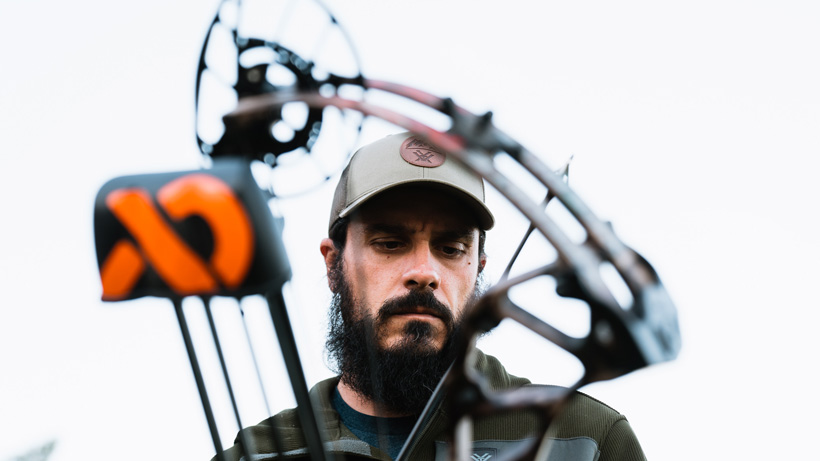 It was the evening of Thanksgiving, I believe. Like many Thanksgiving evenings in the past, my brother and I were out back shooting our bows. He had just recently gotten a new release that had him jazzed, so naturally, he wanted me to try it out for myself. I obliged as any brother would do. What happened next sparked a whirlwind of trouble for me and my archery game. His trigger wasn’t as touchy as mine was, so I anticipated the shot, flinched and actually missed the target entirely at 20 yards. The arrow sailed right into the brick wall. That moment is when I met target panic for the first time. I’m sad to say that it was not our last interaction together either. In fact, it decided to stick around for a few years. With a lot of persistence, though, I was eventually able to bid it farewell.

What is target panic?

If you’re wondering what target panic is, you’re either extremely lucky and have never met it or you likely have it and don’t realize it. Let me first say this: I’ve never met another dedicated archer that hasn’t dealt with target panic in one way or another. It’s a nasty little bugger that can sneak up on you in a hurry. A mental parasite that will feed on your confidence and inject doubt into your mind.

Target panic is 100% mental, but has an immense effect on the physical performance of a shooter. It comes in a few different shapes and sizes. A few are as follows:

An archer is hit with an anchor of sorts at full draw. Their brain won’t let them pull their pin up into the bullseye.

Another form is shot anticipation. A great example of this is picturing someone behind a rifle that thinks it’s loaded. They pull the trigger, nothing happens and you notice a flinch on their end.

That is them anticipating the shot, which is what I personally dealt with.

The inability to not shoot an arrow is another form of target panic. A friend of mine is dealing with it literally as I write this. His brain will make him shoot an arrow regardless of his aim or anything else once at full draw. His response after this happens is always, “I don’t know why I did that.”

People have also encountered the opposite from the above. They hit a mental wall when at full draw, leaving them not able to release the arrow at all.

If you’ve encountered any of the symptoms described above, then you indeed have some degree of target panic. Don’t worry; it’s not the end of the world. Target panic is curable. You’ll just have to put some elbow grease into getting rid of it through both mind and body.

How does it happen?

In order to better understand how to nip target panic in the rear end, we need to first look at how it slithers into our shooting in the first place. Like I said earlier, it can sneak up on you in a hurry. In all honesty, it’s not really sneaking up on us like we think. The truth is that we’re inviting it in without knowing. 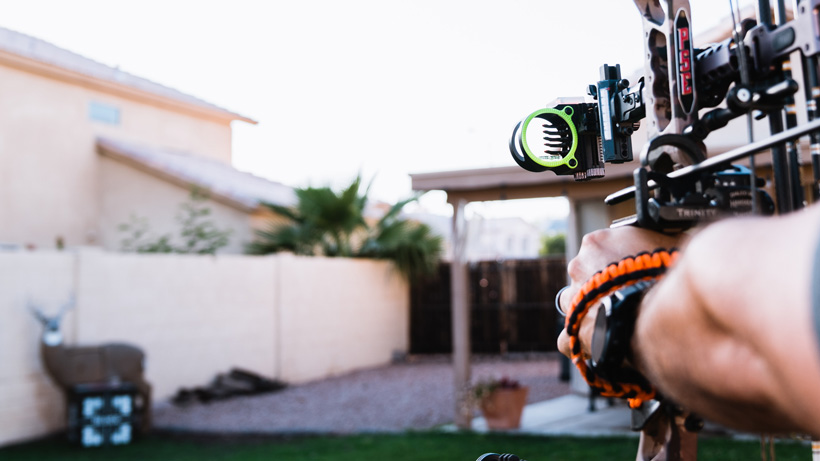 Reps, reps, reps. Practice, practice, practice. In order to get good at something, we need repetition. While this is 100% true, there is such a thing as too much of a good thing. Many times in the past, I’ve fallen victim to shooting too much — so much that I work myself into the ground both physically and mentally. When we’re tired, our form breaks down. And when we do something excessively, often we get in our own head and start thinking too much about things that don’t deserve thinking. All of these things are a straight path directly to target panic. Remember: it’s a mental thing and great things take time.

Just this past summer I witnessed a great friend of mine go through this in preparation for an upcoming high country mule deer hunt. He was shooting so much that he actually did more harm than good. And, now, he’s fighting the uphill battle that is target panic. 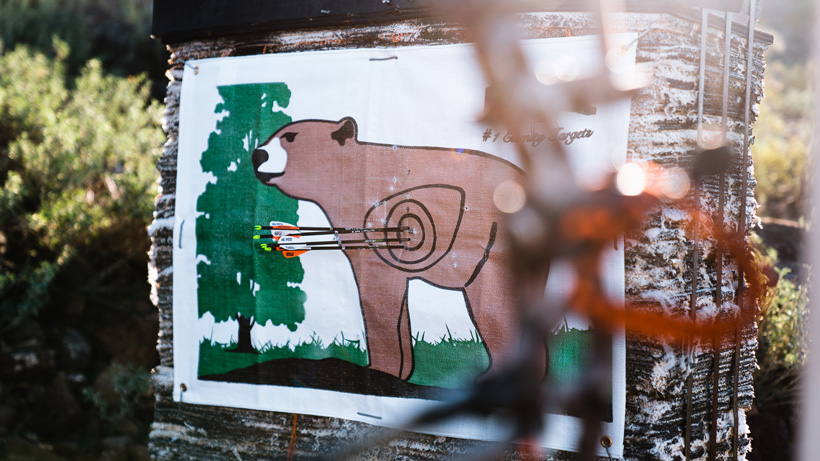 Every archer reaches a point in their game when they want to be better. They want to make those groups even tighter. So, naturally they start to really focus more on their aiming. Perfection is in the details. Aim small, miss small, right? Absolutely! However, there is a tipping point when you start to over aim and try to be too perfect, which is an invitation for target panic.

When a shooter becomes hyper focused on their aiming, more times than not, they end up at full draw way too long. This can lead to a few different scenarios. One being fatigue, which results in their form breaking down followed by just getting a shot off to get a shot off. Another is anxiety can set in. An urge to smash that trigger when their sight pin is right over the center of the aiming point. Sometimes, I’ve seen guys at full draw and watched their index finger literally pump fake the trigger. That’s that mental urge. Giving in to these just coaxes the panic through the front door further and further. Sooner or later, it’s standing in your living room.

Along with what’s been mentioned above, target panic can also set in after some sort of trauma or jarring occurs. A good friend of mine once had an arrow explode on a shot and go right through his hand. Naturally, he had elements of panic after that incident because he was scared of it happening again. It took him over a year to get over it and shoot arrows again.

The Thanksgiving story I told at the beginning of this article is another example. I didn’t suffer from target panic before that happened. Once I flinched and completely missed that target though, my mind was rattled and it took a lot of work to push through those mental barriers that sprang up all of a sudden.

The rub with things like this is you can’t really predict them. They happen when they happen and that’s that.

How to fix target panic

Now, let’s jump into a few proven ways of fighting off target panic. Before doing so, though, realize something. These are not overnight fixes for target panic. They are merely exercises or tactics to point a person in the right direction and start the process. And doing away with target panic is absolutely a process.

A famous exercise that comes to mind is blank bail shooting. If you don’t know what that is, saddle up and open your ears. Blank bail shooting is when a shooter will stand or kneel a few yards, or even feet, from a target and shoot an arrow with their eyes closed. We’re doing two things here. One, the task of aiming has been eliminated. And two, it allows a shooter to really give full attention and focus on how a shot feels. Just be sure to come to full draw, anchor in and that your sight is somewhere in the middle of the target before closing your eyes. You don’t want to accidentally hit the neighbor’s cat, Patches. 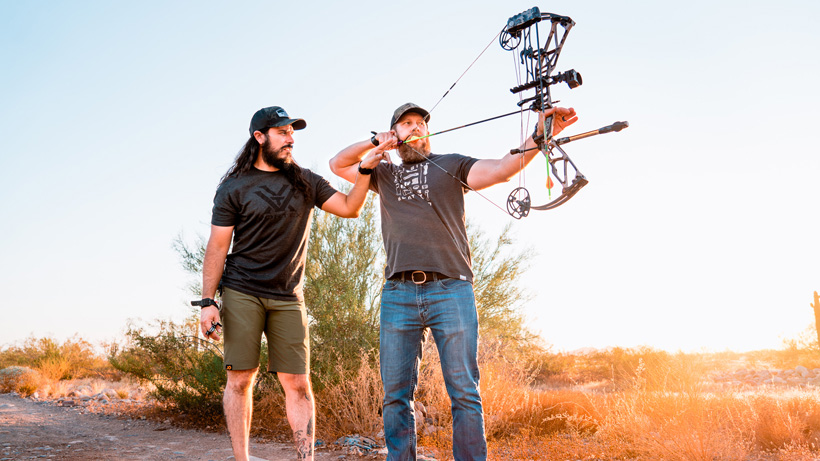 Something that played off of the knowing what a good shot feels like strategy and that really aided me with my panic, was asking someone to help out. I had my wife come into the yard and stand behind me as I came to full draw. From there, I’d anchor in and give her the OK for when I was aimed and ready. Without me knowing, she’d press the trigger for me. It was a surprise shot every time and the arrow was also in the center every time. Simple, but very effective.

Take off your sight

Aiming plays a huge part into the progression of target panic and especially at long range when we’re trying to be ever so perfect. So, try taking off your sight and shooting shorter ranges. I’d say no more than 20 yards to start and with a fairly large target. By taking off your bow sight, you’re eliminating the struggle of getting that pin perfect on the dot because, well, it’s just not there. Focus on good form and shot execution here. Don’t worry too much about where the arrow goes. 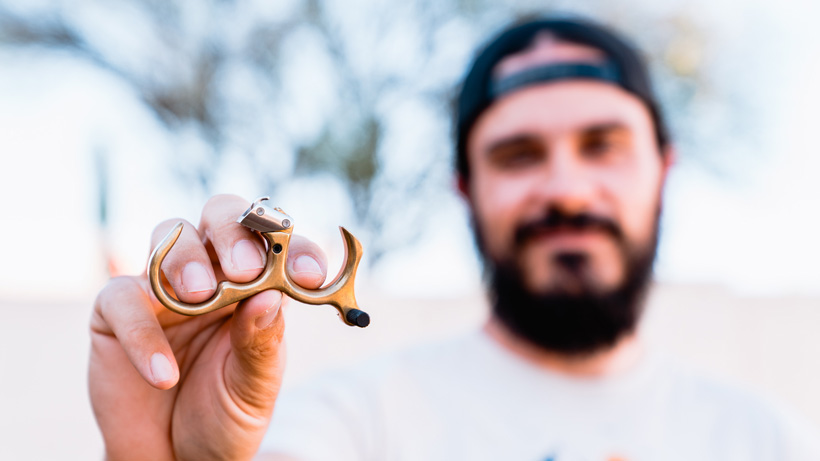 Lastly, a tried and true way of battling target panic is by switching to either a hinge or resistance release. Both of them cater to the surprise shot, which is what you want if target panic is present. They don’t enable a shooter to punch the trigger because there is no trigger to punch. For those not familiar, a hinge operates off of slow rotation and a resistance operates off of tension. If this is the route you want to take, I’d highly suggest that you have someone experienced teach the proper way to fire these before trying to learn yourself. 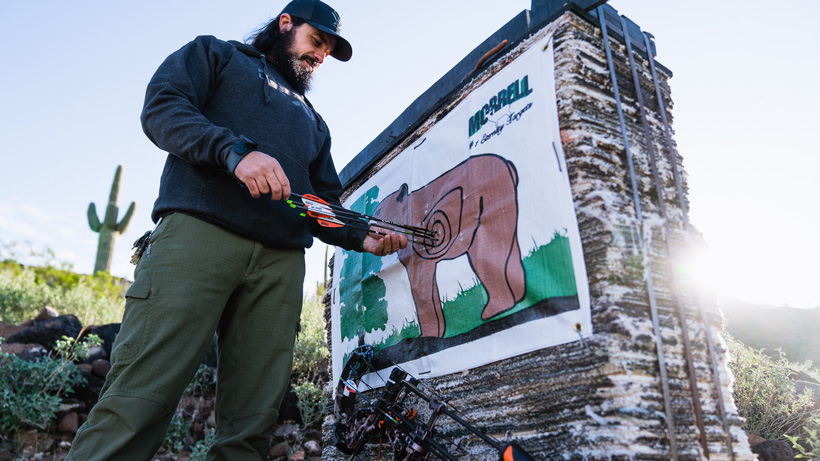 Looking back on that Thanksgiving evening, I’m left with mixed emotions. On one hand, I wish I had never tried out my brother’s new release. Maybe I would have been lucky and not ever dealt with target panic? I’ll never know. What I do know is that I’m glad that I went through it. In all honesty, as crippling as it sounds, it strengthened my mental game behind a bow. It forced me to really work at archery rather than just participating. What doesn’t kill us makes us stronger, right? Dealing with target panic may be playing the long game, but it’s a game worth playing. And you’ll never win if you don’t play.