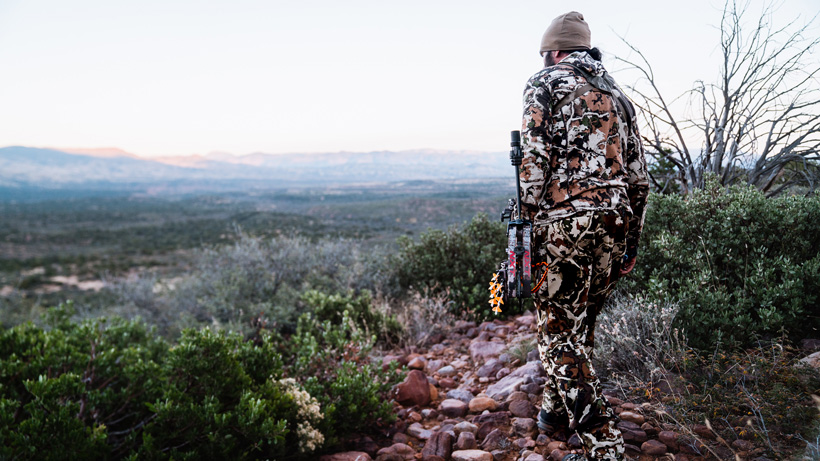 Spot and stalk bowhunting sends more than a few hunters to the mad house each year. We are far from possessing the skills of a mountain lion and our far from perfect performances each year are proof of it. Anything and everything can go wrong when trying to sneak in close and arrow an animal. What could be a perfectly planned stalk might be thrown down the tubes from a doe that flew under your radar. What could have been a night of heavy backpacks is a walk of shame back to camp — all because you wanted to take a shortcut. The opportunity to learn is wide open and the lessons are rich. Here are a few practical tips to keep under your hat for your next spot and stalk archery hunt.

Don’t drop your pack just yet 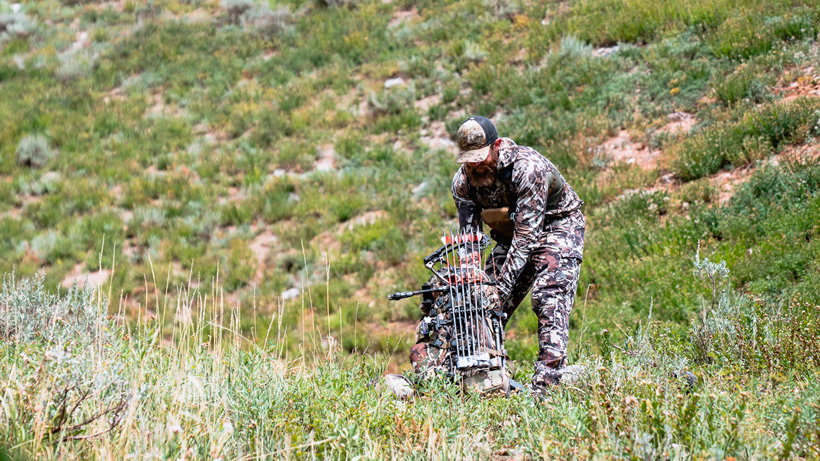 One of the ways we learn is by mimicry. We see something done a certain way, so then we take to the field and try to do that same thing in the same way we saw it done. I’m sure more than a few of you have seen bowhunters drop their backpacks when stalking an animal. There is a reason for that and it works, especially when an animal is bedded. It’s easier and quieter to move around without a backpack. While that is true, it’s not always the best option. In fact, 75% of the animals I’ve had the pleasure of bending the limbs back on I’ve done so wearing my backpack.

Keeping your backpack on your person provides a few advantages. One, it lets you have all of your gear at all times — most importantly being water. Sometimes you’ll have to wait for hours until an animal gives a shot opportunity. Having the ability to take a swig every now and then not only will keep you hydrated, but it lends to the mental game. It sucks sitting there lightheaded with cotton mouth fantasizing about water while simultaneously praying this deer is going to stand. And if he does stand and decides to drift over the ridge, you’ll obviously want to follow, which brings me to the next advantage of keeping your pack with you.

It keeps you mobile. I’ve been the guy who follows him while his pack sits lonesome on a distant ridgetop along with his boots to make it more interesting. I ended up losing that buck and opted to head back to my pack and boots. Had I had my backpack with me, I guarantee I would have stayed the course trying to relocate the deer. It might be a little easier and quieter to move around without a pack, but you won’t be able to stay as mobile.

Be meticulous and aggressive 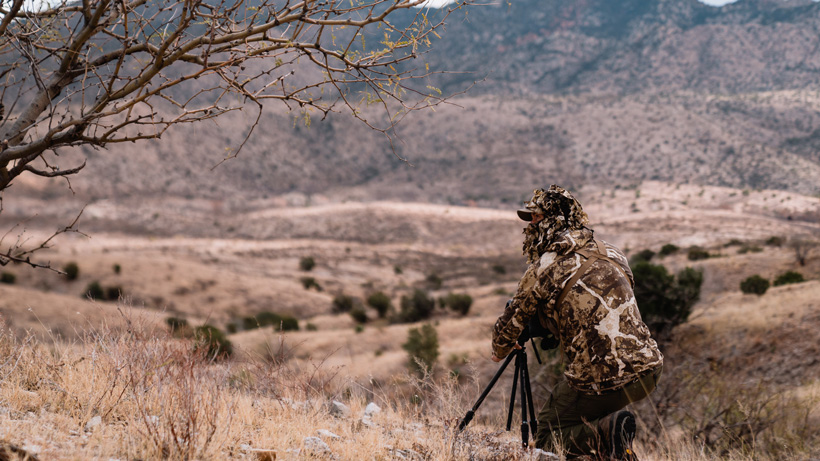 Bowhunting is a game of chess and spot and stalking is no exception in the mix. And just like in chess, you want to be thinking ahead, planning your moves accordingly. This is spot on thinking for spot and stalk bowhunting and can be directly applied to planning a stalk. Stalks need to be planned meticulously for the best chance of success. The best way I’ve found to do this is by doing what I call “connecting the dots.” It’s picking out notable landmarks along your planned route to keep you on track. It would look something like “head straight down to the purple rock. From there take the fence line until you reach the row of tall trees. Break south towards the small peak. Once at the base of the peak, break west into the cut. Take that until below the boulders and then break back north to peak over the top.” Having something like this figured out ahead of time will invite some familiarity into an unfamiliar situation. Everything looks different once you leave your vantage point.

While we need to be meticulous in our planning, it pays to be aggressive in our approach. I’m not saying to run full stride at the deer. What I am saying though is to make a move. Too many times I’ve both seen — and fell victim to myself — the results of sitting back and trying to overthink a situation before leaving. Often, hunters will talk themselves out of success before they even pick up their bow. So, make a plan and make a move. Bowhunting is a gamble where the house always has the upper hand. Just remember: you can’t win if you don’t play.

Where are the other animals?

Before setting off on your stalk, not only do you need to know where you’re going, you also need to know where the other animals are, too — and not just of the species you’re hunting. One time, while stalking a bachelor group of bulls, my plan was pulled out from underneath me due to a few Coues deer I failed to notice. They blew up, the bulls took notice and acted accordingly. Had I taken the time to look a little closer before leaving, I may have been able to avoid that. Or at least I’d have a better chance to. 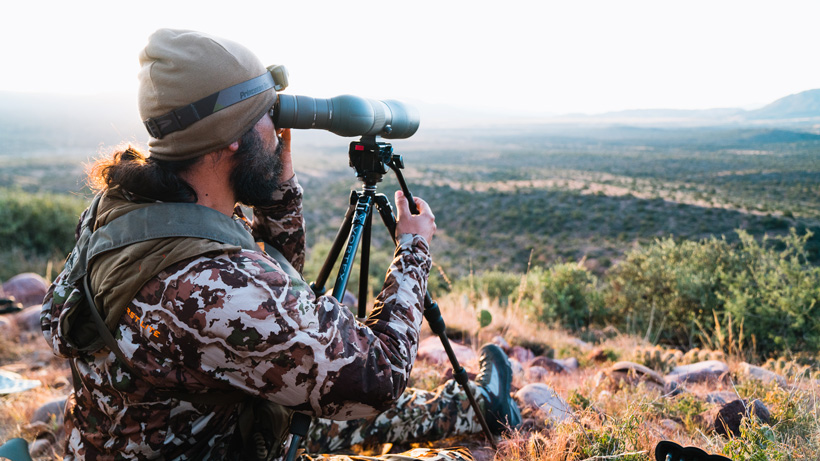 The same thinking needs be applied to animals of the same species. This is particularly important during breeding seasons. It always seems like there is a doe bedded somewhere that flies under the radar just waiting to bust you. And as big as elk are, cows can hide rather good. I remember one time I was busted by a bedded group of cows I didn’t see on my way to a bull. They lit up the area and I was back to square one. So, take the time to scan the surrounding area of where you plan on sneaking through. Take a mental note of the wind in relation to where these other animals are, too. You may be able to avoid being seen by that hiding doe, but if she smells you, it’s over.

Just this past November elk season, I had a great bull bedded down in the bottom of a desert wash. All day long, I waited until he’d stand up for the evening to feed. When he did, I quickly scurried down into position with hopes of cutting him off. Upon my arrival, though, I noticed the wind starting to act shifty. Immediately, a ridge to my left caught my attention. I knew that I needed to be on that ridge to avoid getting winded. Instead, with the bull not far away, I got impatient and decided to try and take a shortcut. If you’ve bowhunted for any amount of time, you know what happened next and it wasn’t me standing in that wash with one less arrow in my quiver. 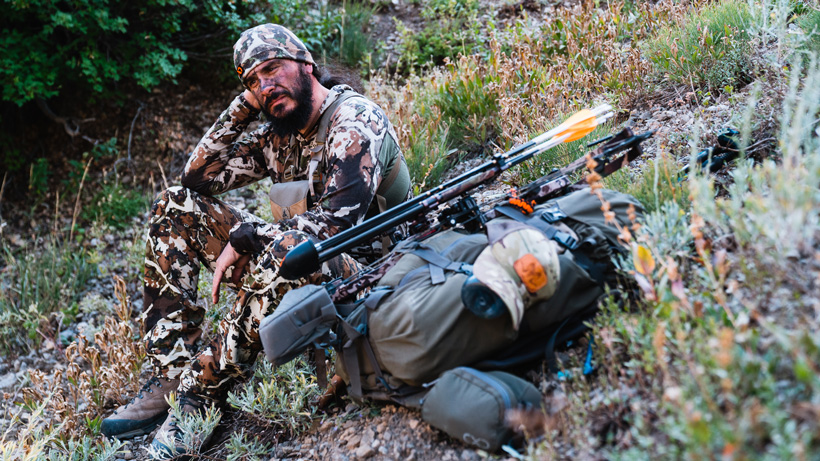 There are no shortcuts in bowhunting and for the best chance of success, you should eliminate them from your mind. Each and every time I have done or witnessed someone try and take a shortcut, whether it’s a shorter stalking route, playing dangerously with the wind, etc., it ends in the walk of shame. On that note, when planning and acting in the field, always take the path of least chance of failure. If that means a four-mile stalk instead of a two-mile stalk, then buck up and do it. If that means an hour and a half walk back to camp in the dark, get that headlamp ready and do it. For ultimate results, you need to put in ultimate effort. 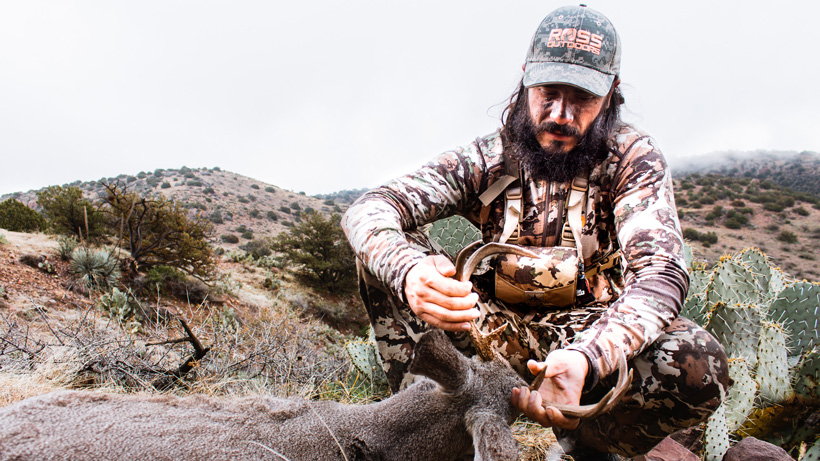 We may not have the uncanny stalking abilities of a mountain lion, but that doesn’t mean we can’t be consistently successful out there spot and stalking with our bows. Those lions have their way and, with time, we’ll find ours. One of the best pieces of advice I’ve ever been given about this stuff is to not be afraid of failure. We are conditioned to avoid it, but it’s truly the only way we’ll learn this spot and stalk bowhunting craft. So, make plays often and embrace those speed bumps in the road. We are only as good as the lessons we learn. If we never stop learning, the sky is the limit.