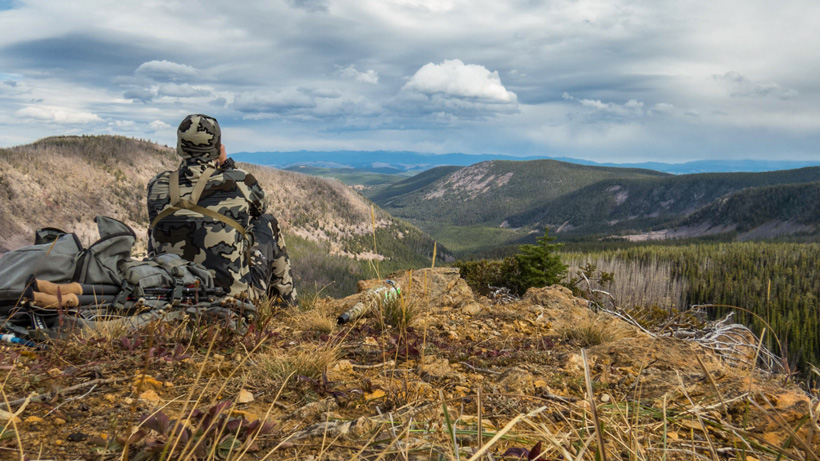 For most, October signals a time for elk hunters to hang up their bows and grunt tubes, call it quits, and silently wait for rifle season. Fortunately, some states out west offer archery seasons extending into October that can provide some excellent opportunities. While this can be a great time to be in the woods, hunters will need to change their tactics, especially when targeting mature bulls. Less competition will be found during this month with most of the hunters draining their vacation time on the prime rut periods during September so you’ll likely have the woods to yourself.

While the best hunting is undoubtedly found in September, the month of October is not one to pass up. Mature bulls will generally transition into a more predictable feeding and bedding pattern in an attempt to recoup from the last month's activities. Yet, at any time, a cow could come into a late estrus, which can turn a quiet basin in a rutting playground of biblical proportions seemingly overnight.

In short, yes. The changing of elk behavior during the post rut stages of October can vary greatly depending on the area you may be hunting. For instance, areas on or around large private sections that may hold hundreds of elk will likely see a smaller and less noticeable shift in behavior than the high elevation basin that may hold less than 20 elk.

In general, look for most of the mature bulls to leave the herds and head for more difficult terrain with heavy cover and nearby food and water. This does not mean these bulls are completely finished with any rutting activity but they will likely not hold a harem for the remainder of the year. If a late cow comes into estrus in the area the bulls may simply slip in, steal the cow, breed her and then leave. Most herds will now be dominated by young satellite bulls chalk full of frustration from futile attempts to breed all year and can sometimes be very vulnerable to some pleading cow sounds.

The main thing to remember during this period is that most of the bulls are just plain tired. Nearly a month of constant running, fighting, and hunting pressure can severely drain a bull of much needed energy for the oncoming winter. While they may answer a bugle they will likely be less than enthused about charging in and intimidating the potential imposter than they were two weeks ago.

Below are five strategies that can turn a September full of missed opportunities into an October of life long memories and a punched tag. Keep in mind that these strategies may need to be adapted to the areas you hunt and the herd dynamics of the resident elk.

1. Be the stealthy predator 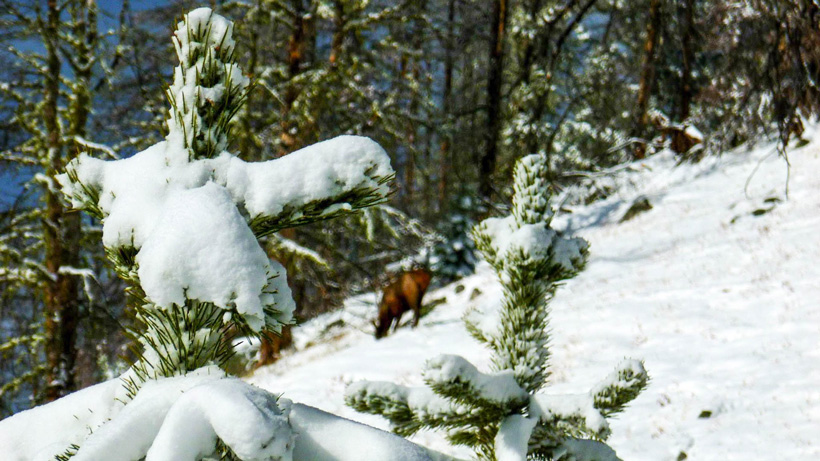 With most of the bulls in the month of October winding down on their aggressive antics some hunters will opt to forgo the typical calling techniques and simply still hunt in areas of elk activity. For this, I like to look back on sign I had found during my September outings. Elk will generally be found very near to the rutting grounds; they may simply move to a more remote drainage adjacent to the primary hunting grounds. When doing this, I like to get the wind in my face and simply creep through areas that held heavy elk activity during the prime weeks of the rut. Be careful not to move too fast and keep a diligent lookout as elk can be very quiet when they want to. The main areas of interest for me to focus on will include feeding grounds, transition areas, and bedding areas.

Look for major feeding areas such as clearcuts, meadows, or burns and move through these areas at first and last light. While it may be difficult to make a move on elk while they are feeding due to terrain or ground cover, it can be a great time to simply locate elk and make a plan on them from that point.

Usually, the best spot to ambush an elk is in transition areas as they move from feeding to bedding areas or vice versa. Having intimate knowledge on your hunting area as well as how the elk use the terrain can be a huge help here. Look for areas such as saddles or ridge tops where an ambush can be set. These can be especially lethal if elk can be spotted feeding in the morning and hunters can then position themselves for an ambush prior to the elk heading to bed. These tactics can also be used to catch elk leaving bedding areas and heading to feed for the evening.

One of the more riskier, yet still productive tactics of still hunting, would be to move at a snail's pace through known bedding grounds. Obviously, the elk will be more alert in these areas but many elk have been shot from or near their beds. 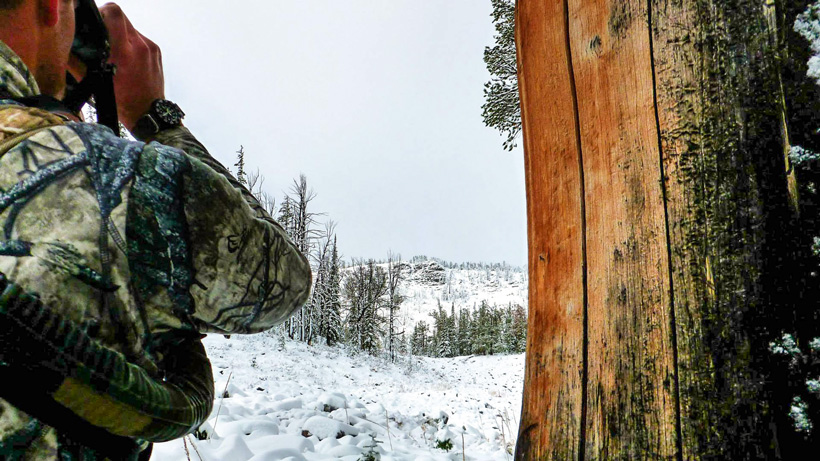 Elk are pretty notorious for being big wimps when it comes to early snowfall. Generally speaking, they will be one of first species to drop elevation as most of their feed options will begin to lose nutritional values with the coming of the first freezing temps. By simply monitoring the weather and planning accordingly a trip can go from wandering through areas that used to hold elk to wandering through areas that now hold elk. If you’ve experienced a recent change in weather and an area once heavy with elk sign is now void of life it's a great time to pull out the maps. While elk can cover a greater distance than humans they will still move across the terrain much like us.

If you were an elk and had to head to lower food sources, whether it be agricultural areas or natural clearings, how would you get there? Generally, the obvious answer would be dropping down through a drainage or following a ridgeline. Study your hunting area and look for any easy route leading to lower elevations and you will begin to see areas to focus your efforts on. 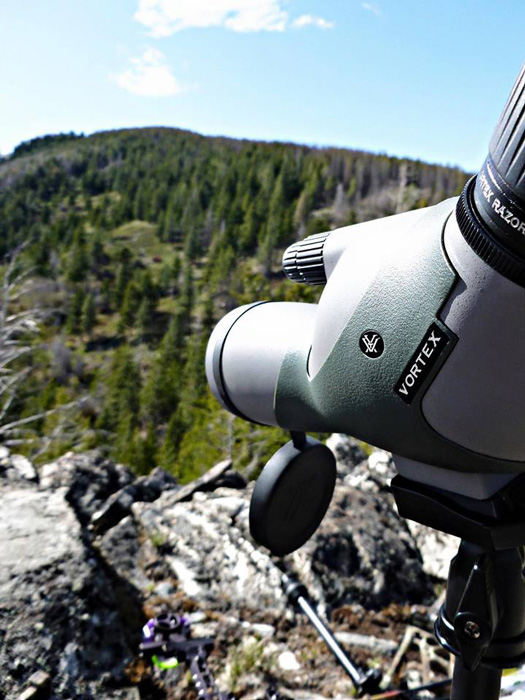 If terrain and cover allows it, glassing can be one of the most effective tactics in finding October elk. For this, I like to look for obvious high points that will allow me to see several areas of interest, mainly including feed and transition areas. Look for large clearcuts and meadows near heavy timber; if you have saddles between these two areas it can be gold. It’s important to be in these areas prior to daylight as mature bulls may spend little or no time in the open once the sun begins to light up the eastern sky. Once elk have been located pay special attention to how they move through the area.

As hard as it is, fight the urge to pack up camp and beat feet to the elk in an attempt to cut them off. Generally speaking, if elk are unpressured they will exit the timber in the afternoon very near or exactly where they entered it in the morning. Mark where you last see the elk and you may have a perfect ambush point for when the elk return to feed in the evening. Setting up in these areas and enticing a bull with some light cow calling may also bring them within range. 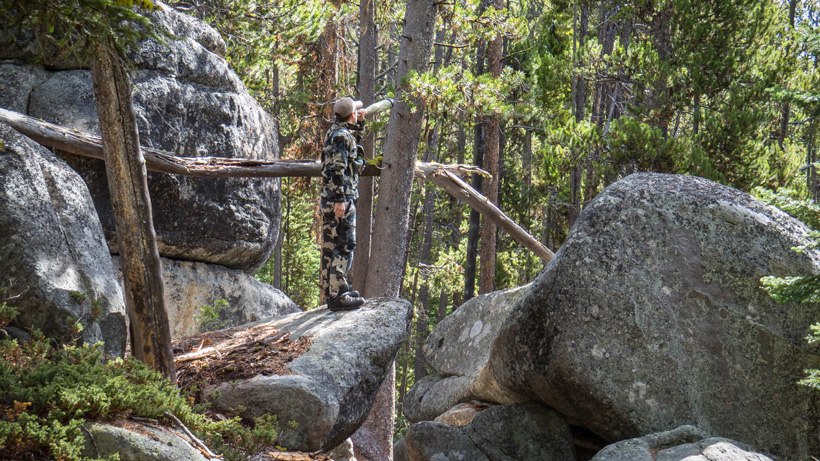 Elk are very vocal animals nearly year round and, unless they have been recently pressured, October and, even, November elk will often times respond back to light bugling. Just like the rut, finding areas higher in elevation in an effort to broadcast your bugle over the largest area is generally the best bet. If you do find a responsive bull take care not to escalate the situation too quickly. Remember that these bulls have spent a very tiring four weeks of fighting each other and many are just simply fed up with it. Use the elks’ behavior and let them control the situation, only ramping up the calling as they do.

While it is short lived, there will often be an October rut spurred on by one or two late cows in a single basin and every bull in there knows this is his last chance. This stage will generally only last a day or two so timing is critical; the action will be intense—sometimes even more so than in September. Again, let the bulls dictate how aggressive you get with your calls. Be fully aware that you may be able to simply bugle your way right into the lap of a bull. Conversely, if the wind is right and the elk are talking consistently, many hunters will simply slip in quietly and wait for an opportunity. This stage is generally impossible to predict and will only be encountered by hunters who happen to be out on these few magical days. 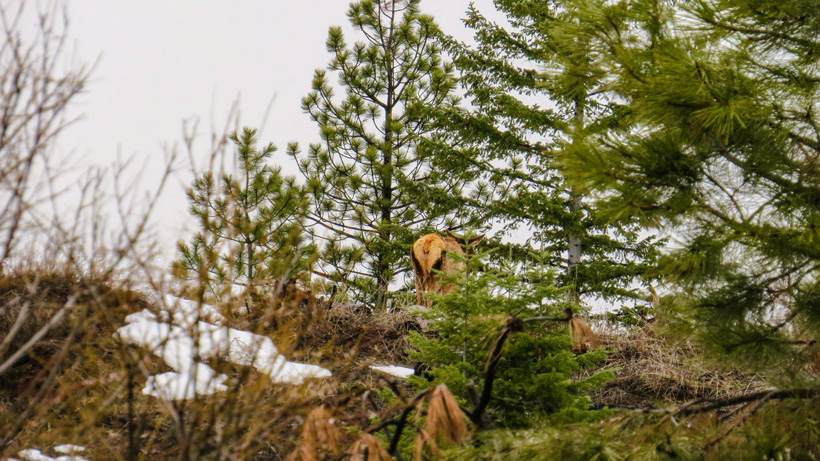 While arguably the most boring way to hunt elk, cold calling can easily be the most effective. For this, you simply move into an area that’s heavy in elk sign and create your own scene of elk activity through calls. Now, there is a lot more to this than simply finding some tracks and calling. Location should be of your main concern, followed by the types of calls you are broadcasting as well as the ever important wind. I like to look for areas that are convenient for elk to come into, but will provide them with enough security to appear within range. The biggest mistake I see here is most hunters set up in areas where they can see the elk approaching from a longer distance. Remember, if the elk can’t see another elk, they likely won’t come in. Instead, set up in areas that allow some visibility, but still have enough cover to entice the bull’s imagination. Terrain features like saddles or well worn trails can be excellent areas to focus on. Avoid very steep or difficult to traverse terrain and keep in mind that elk will generally try to approach from your downwind side. I like to focus mostly on cow calls during October as most bulls are generally uninterested in fighting other bulls and primarily interested in finding that last hot cow.

The best advice here is to simply “think like an elk.” What would you do in this situation? Fighting the mental battle of giving up after a long September can lead to some incredible hunting in October. Let the bulls dictate your next move but be ready for anything as the post rut season can provide many surprises and some of the best days in the elk woods.