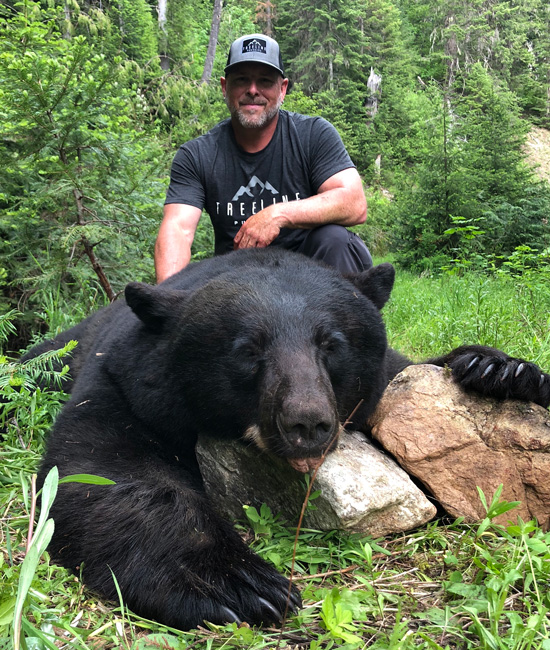 A little throwback... our family had just moved to Montana. It was the last week of May, and I drove up to an area I had e-scouted for bears. Day one was more of a hike and ended up uneventful. The visibility and glassing options were much more limited than I had originally thought. The area was not proving to be very conducive to spot-and-stalk style hunting. Day two started out much like day one, but I knew bears had to be in the area. I decided to change my tactics and try my predator-calling skills. Walking down an old logging road, I found a small open logged-out area with an elevated perch where I could see 360-degrees.

I will admit, calling bears solo in grizzly country can be slightly uncomfortable and increases the pucker factor. When you call bears, you are essentially setting yourself up as the prey. Unfortunately, electronic calls are not legal here in Montana. This eliminates the ability to place the call away from you, so I tried to pick a spot where I could see well in every direction just in case something unwanted responded to my calls. Since there were a lot of deer in the area, I decided to use my best imitation of a deer fawn in distress. I blew that call for 35 minutes solid calling in several deer in the process. They were running all around me. This gave me the feeling that my calling was effective. I was literally out of breath from calling and just about to stand up. I had put my call away and was reaching for my pack when I saw a pitch-black bear coming on a dead run straight towards me. He was just over 150 yards and closing fast.

I remember being amazed at how agile this bear was jumping over logs and brush piles with ease. What was more impressive was how he combined his stealth and dexterity not making a single sound coming in. He closed the distance to 50 yards, stopped, and looked right through me. He knew exactly where that call was coming from. The wind was perfect, and after a few brief moments of pause, he continued his path straight at me. I centered my scope on his chest. Closing in on 25 yards, I had no choice; I was going to have to take a frontal shot. I rolled him over backward with a .338 Win Magnum. Somehow, he absorbed the shot, got up, and kept running. Now he was slightly quartering towards me, and I had to put a second bullet in him at point-blank range. It was over.

I sat there for several minutes, trying to wrap my mind around what had just happened. Through the years, I’ve had a fair amount of success, but this time it seemed so different. I was sitting there, alone, with an absolute brute of a Montana bear stretched out next to me within arms’ reach. I felt truly blessed to be exactly where I was at that moment.

Using predator calls to conjure up black bears is not recommended for the faint of heart. You should understand that calling bears can quickly escalate from tranquil to incredibly intense. Predator calling tactics will work on both spring and fall bears. Personally, I prefer to focus on spring bears, mainly because I’m chasing so many other critters in the fall. Spring bears emerge from hibernation hungry and focused on restoring their depleted bodies. Black bears are omnivorous and opportunistic feeders by nature. Combine that with deer fawns and elk calves starting to hit the ground, and you just might have the perfect scenario for calling bears.

The risks of calling bears

In Montana, where I live, and a handful of other western states, grizzlies are part of the hunting equation. Predator calling in grizzly country requires intentional precautions. In the absence of grizzlies, don’t be lulled into thinking that a black bruin charging into a distress call is not a threat. The risk of a bear attack is low, but that’s no reason to take undue chances with an apex predator. Be ready and alert at all times. Don’t forget to keep your focus and remain extremely careful and alert after the shot. Always carry bear spray, and or a pistol (learn more about those two options here). No exceptions. Keep them close and ready, even when rifle hunting. It’s ok, and wise, to be a bit nervous, as it may end up being your best asset. 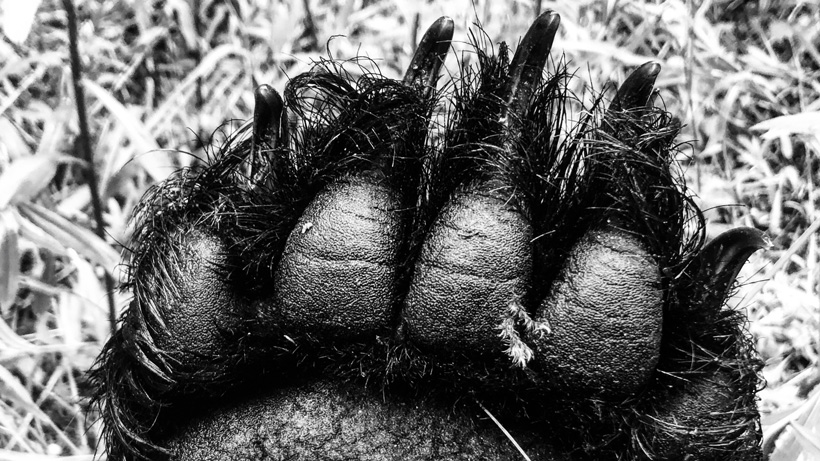 This may sound simple enough, but the fact is, it can sometimes be difficult to tell black and grizzly bears apart. Black bears are not always black, and color phase bears are relatively common in many areas. Some states require passing a bear identification test before you can purchase a bear tag. Before you head to the mountains chasing Ursus americanus, you should take responsibility to thoroughly understand the differences. The Montana Fish, Wildlife & Parks, and the Western Wildlife Outreach have good bear identification programs.

It’s not for everyone, but I do a lot of my hunting solo. Even with that statement, I cannot recommend predator-calling bears solo. Calling can be highly unpredictable. Bear calling takes patience and persistence. It can take multiple setups and calling attempts to entice a bear to a distress call, and bears can respond in several ways to your calling. They can stalk in over long periods of time, charge in ready for action, or anything in between. I have found that distress calling will many times trigger a bear to go on the move. He may not respond directly to the call, but he could reveal himself in a spot-and-stalk scenario. I use this tactic a lot. Don’t discount the fact that the very nature of blowing on a distress call has made you the prey. Those bears are coming for dinner; don’t forget that. 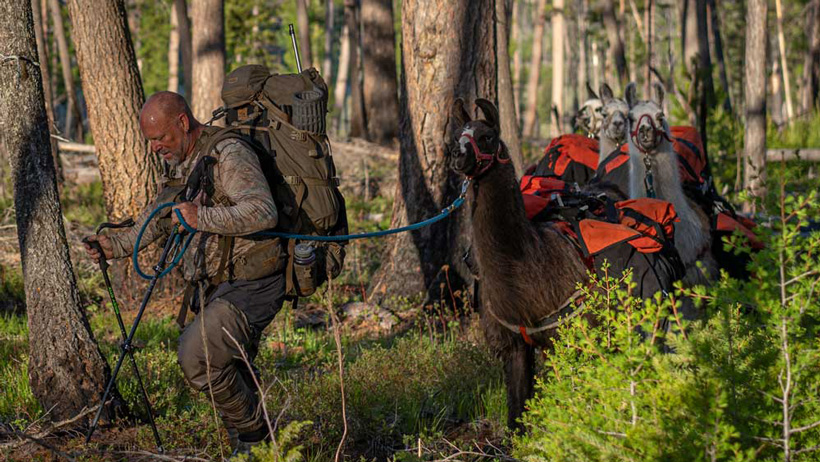 Even the best of callers can’t call in bears that are not there or those that can’t hear the call. It’s critical that you identify good potential bear areas. More remote areas are always on top of the list, but don’t overlook the possibility of calling bears that are closer to human activity. Calling is a great tactic when things are slow, especially when you’re seeing signs but are not able to put eyes on any.

For those who want to learn more about finding bear areas, the Using Terrain, Elevation, and Snow Level Analysis To Find Spring Bears Webinar is now available as part of the Treeline Academy E-Scouting Elk Course. We specifically look into how to use terrain, elevation, and snow levels to zero in on locations that are more likely to attract and hold spring bears. The webinar is “FREE” to all E-Scouting Elk Course members and is available now in the Webinars & Resources Module on Treeline Academy.

Like most big game animals, you must keep the wind working for you at all times. You may be able to exploit the nearsightedness of a bear, but you will not fool its nose and ears. Bears have an incredible sense of smell and if you ignore those two senses, you will not get close to many bruins.

Your setup is crucial to success. You must be able to see a good distance in all directions. The bigger the buffer zone between you and the thicker cover, the better. Bears may seem to just slumber around, but they can be deceivingly fast when necessary or provoked. Natural barriers are good, as long as they don’t obstruct your view, but try to limit or remove any blind spots. Try to position your setup so your longest clear view is downwind. Like most predators, bears can try to get downwind to catch a scent. You have a better shot if you can spot them before they get in your scent cone.

A variety of distress calls can work, but I prefer to use deer fawn or elk calf distress calls. I think the larger the reward, the more willing the predator might be to cover longer distances. You can also get loud and far-reaching volume out of this type of distress call. In states where electronic calls are legal, I like to end my calling setups with a bear cub distress call. A cub in distress can elicit explosive reactions from boars, especially during the mating and rutting period. I will try calling sequences during the entire spring bear season, but I find more success from mid-May to mid-June.

You want your calling sequences long and loud because bears unlike other predators will lose interest quickly. You need to keep the bear focused and coming to your call. You can catch your breath, even pause a few seconds, but keep the calling breaks very short. Blowing a predator call for 30 to 40 minutes straight is much tougher than you might think, but one of the biggest mistakes hunters make is not calling long enough and loud enough. If you’re getting uncomfortable with the duration and the volume of your calling, you are probably doing it just right. 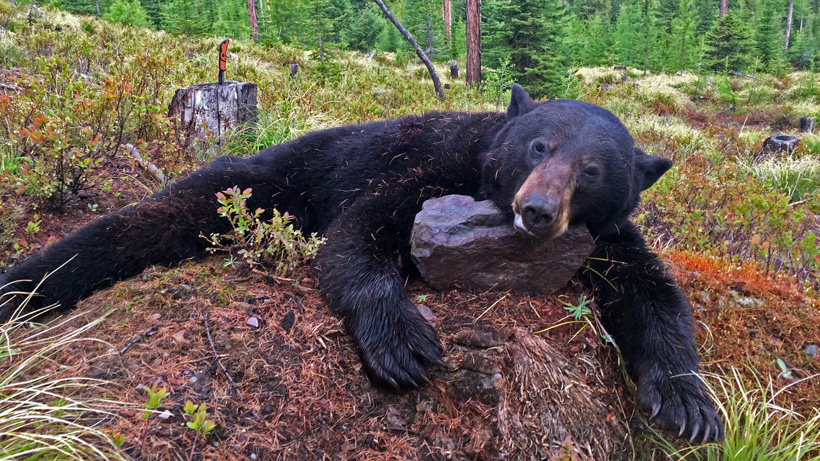 You must give bears ample time to respond. I never leave a stand before 30 minutes, and I try to exceed 45 minutes. Basically, it comes down to how long you can keep your solid calling sequence going. When blind calling, it could take several setups over many days, but don’t get discouraged. Bears are big game animals, not your standard run-of-the-mill coyote. The adrenaline-filled reward is worth my patience.

Bears are not particularly hard to kill. At the same time, they do not have a reputation for going down easy. You could be dealing with your bruin at close range. Since bears have thick hide and fur that can make blood trailing problematic, you will want a gun that packs a real knockdown punch. You will probably never be sorry about carrying a magnum caliber. Also, make sure your scope is always set and focused at the lowest magnification. A 2-4X is preferred for handling close-range fast-moving bears. 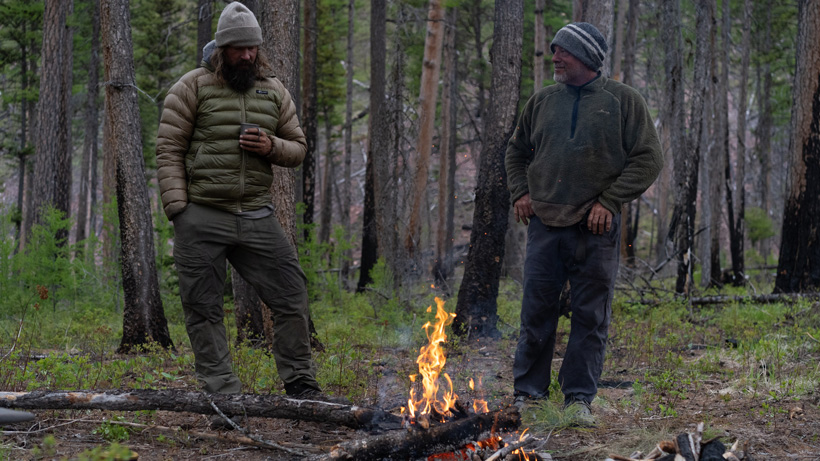 Predator calling bears is certainly not for everyone, but if you're looking to become a multi-dimensional bear hunter, this might be a tool you can add to your arsenal. I can’t remember many hunts that matched that level of adrenaline rush.

Mark Livesay is the founder of Treeline Pursuits and the creator of Treeline Academy (a class that is a complete end to end e-scouting solution for elk hunters). It's the most definitive resource ever assembled on the subject. Mark designed this curriculum for both the beginner and the experienced public land, DIY elk hunter. This course is a first-of-it’s-kind and is powered by more than 30 years of elk hunting experience. The strategies that presented in this course WILL give you a real advantage when it comes to planning your hunts, developing a strategic hunt plan, and it WILL ultimately improve your odds of finding more elk.