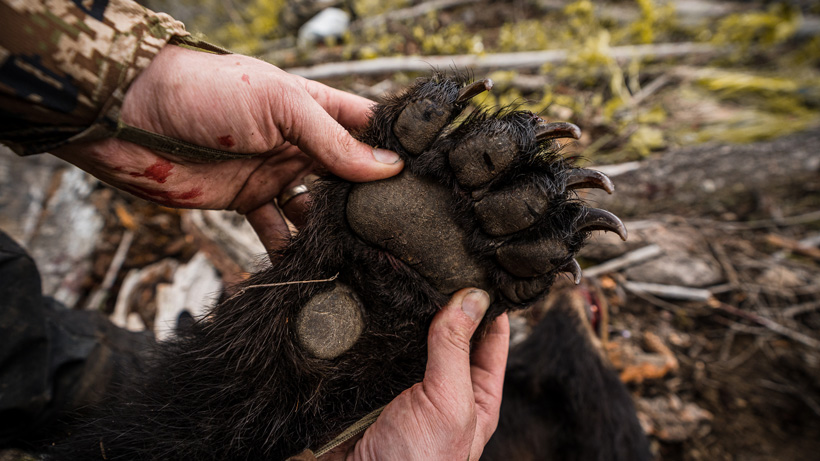 The unpredictable weather, steep slopes, unforgiven terrain and wary animals can make the West a tough place to hunt anything. Bears are one of those animals that can be a great hunt in both the spring and the fall, but can also be super hard to hunt — even for the most experienced hunter. After all, they are a nocturnal animal that hibernates for a large portion of the year. During the rest of the year, they prefer the solitude of dense timbered forest where they scrounge and hunt for their food throughout the night. As a hunter, the spring is the best time to be chasing bears even though the fall has the most bear seasons in most states. However, a DIY hunter can make a lot of mistakes that will keep them from notching their tag. If you can make some changes and find ways not to make these five errors, you will be in a better position to take home a nice trophy and a freezer full of meat.

The single most challenging part of hunting bears in the West is finding them whenever you are hunting them. They are nocturnal omnivores that can eat pretty much anything on the mountain; they are also elevation-dependent. Which is why GOHUNT's new Terrain Analysis Tool is perfect for finding spring bear spots! I mean that bears will change elevation frequently and the elevation they are at can dictate their behavior. Bears that are at higher elevations will hibernate earlier and for longer since their weather gets colder sooner and their food source has a shorter growing window. Bears at higher elevations are also prone to dropping in elevation to the greener areas, especially in the spring when they leave their den. If you are not in the correct elevation, you will see fewer bears or possibly none while someone who is hunting in the correct elevation may see a ton of bears. Look for green areas, bear signs and constantly changing your elevation to help you get into more bears and be more successful.

When it comes to spot and stalk bear hunting, there is nothing more important than finding bears; however, the next most important thing is to find killable bears. Time and time again, I have seen hunters — including myself — find the perfect bear habitat with an excellent green south-facing slope. There may be multiple bears visiting that slope; however, if you cannot see or shoot from your glassing point, then you might as well be in a different spot. You also need to pay attention to the direction you are facing.  Bears are most active at first and last light, so if you are glassing into the sun during these times, you may just miss a sighting or a shot opportunity. The wind direction is also essential. Time and time again, I have seen bears hundreds of yards away put their nose in the air and run away after smelling a hunter. The wind in the upper portion of the drainages can be unpredictable. But if you can put yourself in a favorable wind, you have a better chance not to blow out a basin and make a good stalk within range. 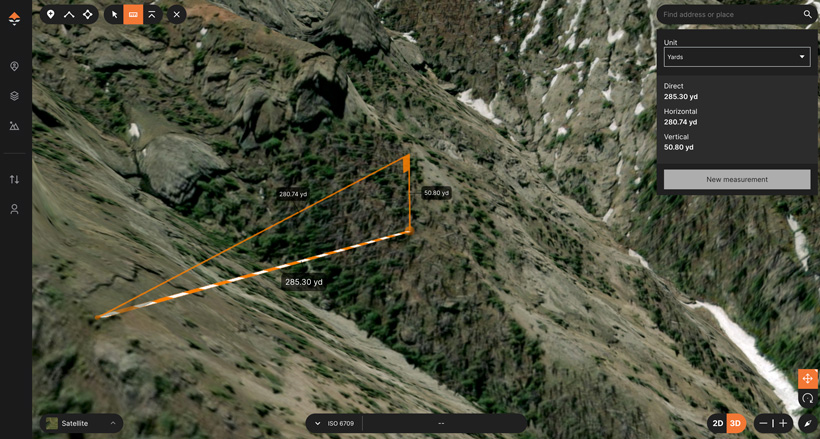 When it comes to e-scouting and bear hunting in general, it is easy to underestimate the size of a basin. This is why I highly recommend that e-scouters use a measuring tool that will show the straight line or shooting distance from a proposed glassing point to the area you think that you will find bears. The GOHUNT 3D map has a great tool that you can use to do this. This will help you understand whether you can shoot across the basin or not. If you cannot, then you can determine how you would hunt the area if it’s possible and, if it is, how you can easily get to a closer shooting spot undetected after spotting a bear. I find that many hunters — especially those who are not familiar with hunting in the mountains — often think they can shoot farther than they can. I have glassed up numerous animals that look to be in range only to see that they are more than 1,000 yards from my current location. Do not overestimate your shooting ability. Instead, find a way to cut the distance to something more lethal.

Bears — especially in the spring — can become creatures of habit. If they have a green slope that they enjoy, wild berries or a herd of elk that are about to calf, they will frequent that spot repeatedly. If you are hunting an area and see a bear, slow down and do not rush the opportunity. Take a few minutes to plan the stalk, plan the wind and plan for the bear to do something unexpected. It is better not to rush the opportunity and bump the bear. If, for whatever reason, you can not get close to the bear, that is okay. Simply plan to be there the next day around the same time. There is a good chance the bear will be following a similar routine.  Of course, other variables such as hunting pressure can affect this, but this is usually a great way to go.

Bears are large animals with good size vitals; however, many hunters place poor shots on them.  This is primarily because their black fur hides the back of their front leg, which has hunters shooting at a black blob instead of the vitals. This is also because many hunters take shots that are too long on bears and hit them poorly. Either way, this is not the way to fill a tag. This is why a hunter who wishes to kill a bear ethically should be at close enough range to see the crease behind the front leg where the vitals are and then execute a well-placed shot. If you cannot do that, then you would be better off not taking the shot.

Hunting bears can become an annual tradition in the spring and fall, especially in the West.  Bears are prevalent in numerous states. There are readily available tags and hunting them can be a blast. Some hunters choose to bivy camp while others day hike from trailheads — all with success. If you get out into the mountains in a place with good bear numbers, cover a lot of ground and glass up good territory, you should be able to find bears. If you do this and don’t make any of the mistakes mentioned above, you have a great chance of coming home with a bear.