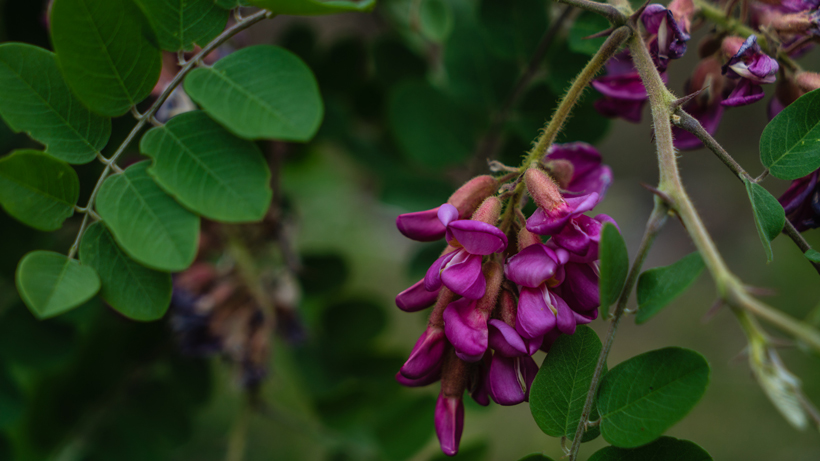 It was the evening of a late August bear hunt down here in Arizona. A hungry black bear fed its way along a bluff across the way from me. Taking a black bear with a bow was always something that appealed to me and, with any luck, this would be my first one. After making the big loop around to come in over the top of the bear, I found myself a mere 21 yards above the beast. How exciting it was to be within archery range of this bear that had no idea that I was there. It was a slam dunk—or so I thought. Once two of my arrows sailed over the boar’s back, my dreams of taking a bear with a bow were put on hold. From that point forth, not only did I know I could do this, but bowhunting black bears spawned into an addiction that still takes hold of me today. Feeding that addiction takes some know-how though. Here are some avenues to success when bowhunting black bears.

Note: While I am aware that baiting and hound hunting are extremely effective ways of harvesting bears with a bow, this piece will focus on other means as those methods aren’t legal everywhere or for every hunt. 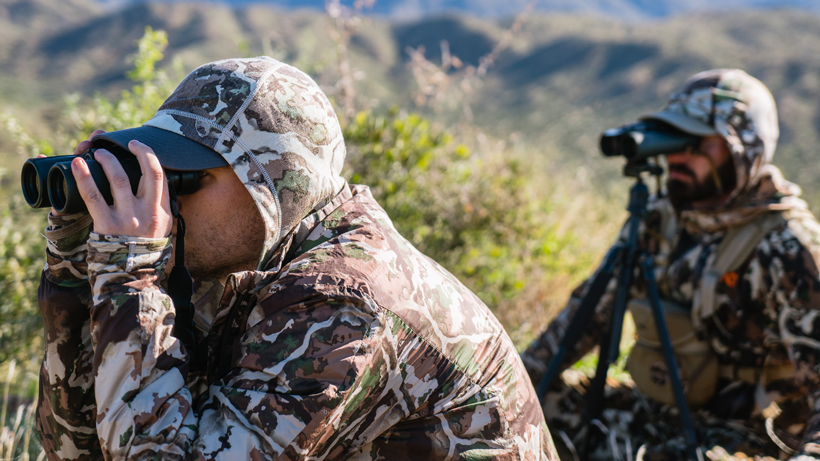 Bear hunting in general is all about finding the right food source and figuring out which one that depends on what time of year it is when you’re hunting bears. Down here in the desert, a common mistake is that folks will try to hunt bears in the spring on the same food that they hunted them on in the fall. It just doesn’t work like that. Knowing how they move throughout the year from food source to food source is essential and can make or break your hunt. Bears get keyed into their food so much that, if it isn’t there, you need to move on and find greener pastures because the bears aren’t going to be there. Once you do find the right food, though, a feeding bear is a great bear to put the moves on and close the distance into bow range. This brings me to my next talking point.

Spot and stalk versus ambush

Whether you choose to spot and stalk or ambush hunt is going to depend on the country in which you are hunting. Spot and stalk hunting requires a fair amount of visibility, so that you can complete the equation of “spotting and stalking.” Most of us do this by glassing feeding areas in hopes of spotting a bear out snacking. This is my favorite way and puts the advantage in your court as the bear usually has no idea you’re there from afar. When bears are feeding, I’ve noticed that they might bounce around erratically from bush to bush or grass patch to grass patch, but one thing remains: they stay in the general vicinity, which is vital for a spot and stalk bowhunter. So, if you arrive where you last saw the bear and you don’t see them, chances are they aren’t too far away. I wouldn’t close up shop just yet. Once you do see them, sneaking up on them usually isn’t too difficult as they are so involved in their food. Just stick to general good practice with spot and stalk hunting and you’ll be fine. 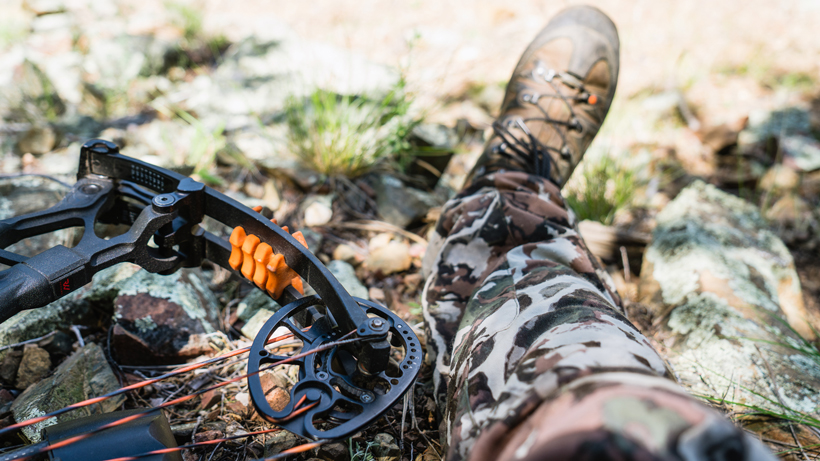 You want to know the best way to get within bow range of a bear or anything for that matter? Let them come to you. It gives you less to screw up on if that makes sense. As long as the wind is good and you’re in the right spot, having a bear walk to you is much easier than you going toward them. I find that this method usually comes with increased nerves compared to spot and stalk hunting. When stalking, you almost don’t have time to get the shakes because you’re so focused on stalking. In the case of playing the waiting game, the only thing that seems to grab your focus is the sound of whatever animal it is moving towards you. This is pretty exhilarating and adds a whole different level of excitement.

As far as where to set up an ambush, that’s where some homework comes into play. Setting a trail camera on a hidden water source can shine light on a goldmine of bears. Bears love and need their water. Of course, there are also things like pinch points that will funnel bears through a certain area on their way to and from food. Another thing to take into consideration is trying out “spot and ambush.” Bears that are out feeding in the morning and retreat to thicker cover to lay down will often come right back out into that feeding area again afterwards. It might be the middle of the day or it might be that evening, but they usually show themselves again! 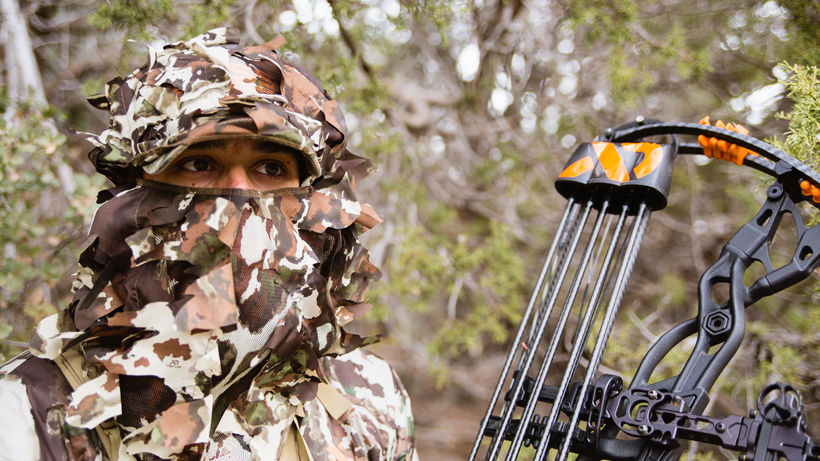 If you happen to carry a few extra pairs of underwear with you in your pack and are hungry for an adrenaline rush, there is always predator calling. Yes, ringing the dinner bell and bringing a hungry bear to you. Sounds insane to some, but it is a mighty effective way to get a bear in range for a close shot with a bow. This isn’t like calling coyotes, though. They are much longer stands. I’ll call in an area for a minimum of 30 minutes straight; although, it’s actually more preferable to call for 45 minutes to an hour. Bears have a rather short attention span and are easily distracted. So, if a bear happens to be coming your way, but you stop calling and they come across a berry patch enroute, it is likely they’ll stop there and feed on the berries instead. Lots of folks prefer an electronic caller for this as it lets them put their total focus on being aware and getting a shot off. However, there are those out there who prefer a hand call for the bruins. With a hand call, you can really pour it to them and it isn’t on an audio loop, making it more realistic. Any distress call will do as bears are opportunistic feeders. There are cub-in-distress calls, though, that I’ve heard are quite magical. Make sure that you either sit back to back with a partner or have your back up against something as sometimes these bears come in quick for lunch… 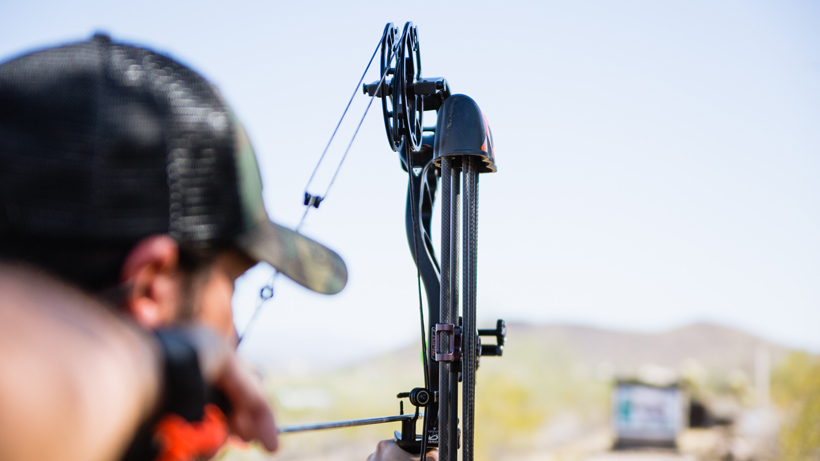 Before we close this out, I wanted to take a quick moment to talk about aiming on these bears. Bears have quite a bit of fur on them and where their body ends and coat starts can be quite deceiving. Lots of folks out there have fallen victim to putting an arrow low and tight to the shoulder and coming up empty handed. A famous term for bowhunting bears is aiming for the middle of the middle. This means taking the distance from the nose to the tail and landing in the center of that. Then taking the distance between the bottom and top of the bear and landing in the center of that. The point in which these two measurements meet is the ideal spot to aim on bears with a bow. There are diagrams out there that depict this exact aiming spot that you can find with a quick Google search. 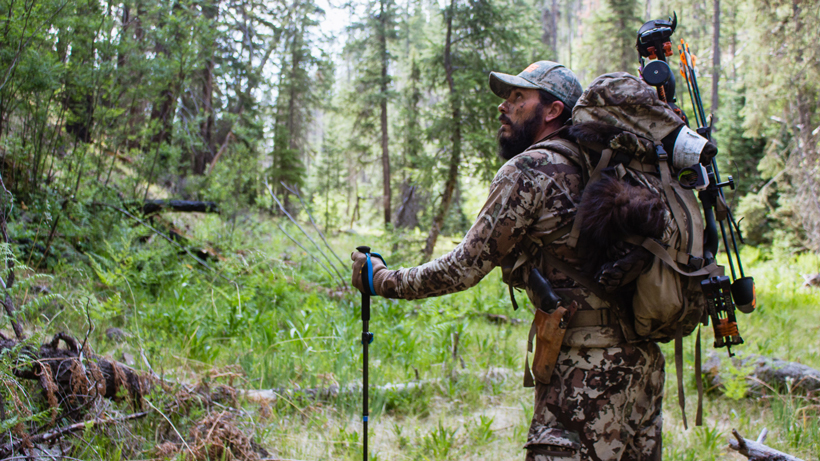 The year after missing that bear twice, I was as driven as ever. The following spring, I was glassing a big canyon that was full of bears. On the evening of the third day, we spotted a boar breeding a sow down beneath us. After a quick stalk, 25 yards and a fallen log is all that separated me from achieving my goal. 15 minutes flew by and my arrow flew soon after the boar released the sow from his grip. That was it and I had done it. Being that close and watching that whole encounter play out before me sealed my fate as a bowhunter in pursuit of black bears. Nothing I had done up until that point compared. It left an imprint on me that will last a lifetime and, with a little sweat, you can achieve the same out there in bear country with your bow.