Why pack llamas for your next hunt? 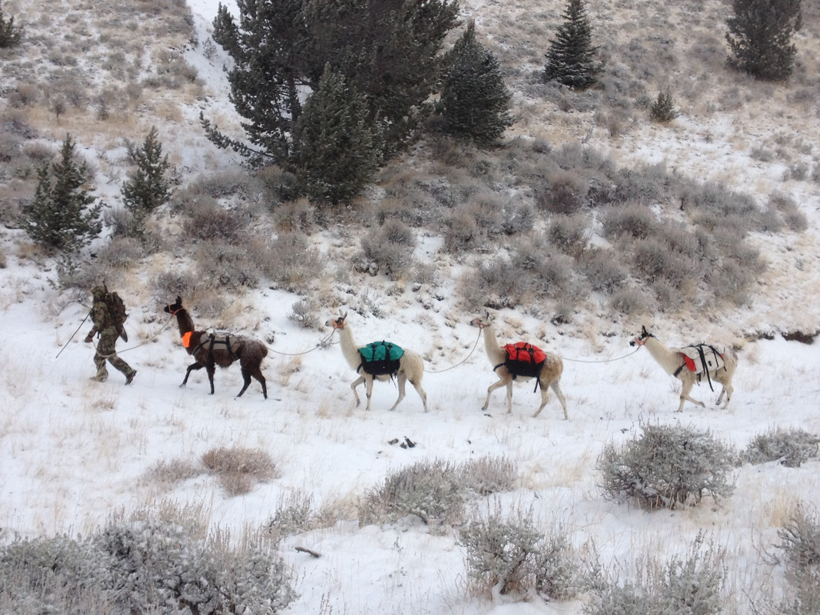 Llamas are native to the Andes Mountains of South America and live at 9,000 to 14,000 ft. of elevation. These animals are natural packers with 4,500 – 6,000 years of experience under their belts in South America. Llamas are considered browsers and eat 5 to 10% that a horse or mule eats in a day. When it comes down to it, they can eat almost anything. As you are packing with them in the mountains you will see them eat bark, pine needles, sage brush and even pine cones.

Why use llamas on your hunt?

One reason why we use llamas is their ability to carry amazing weights off the trail for miles on end. This allows us to camp in spots where most people cannot camp and it allows us to stay at elevations where the action is rather than having to hike up and down each day to and from camp. Llamas allow you to be extremely mobile while in the backcountry this has proved to be a huge advantage.

Llamas are truly amazing for a hunter in the backcountry. On the more extreme end I have hiked 15 to 17 miles per day for 9 days in a row with our llamas, at that rate they carried payloads from 70 to 85 pounds per llama and gained at most 1,000+ feet of elevation in one mile. Over all we climbed 3,500 feet and took multiple 1 to 2 minute breaks and a lunch break for 45 minutes. We conditioned the llamas prior to this trip for 3 weeks and took it slow at the start, but like humans, they got their lungs and legs under them and pushed on. Needless to say they are extremely hearty animals.

What kind of gear is needed to pack with llamas?

Each llama needs a saddle, blanket, halter, two panniers, lead rope and a stake out lead. Also, you will need a brush for brushing them out, a scale for measuring the panniers (panniers are the bags that go on each side of the llama that hold the gear). 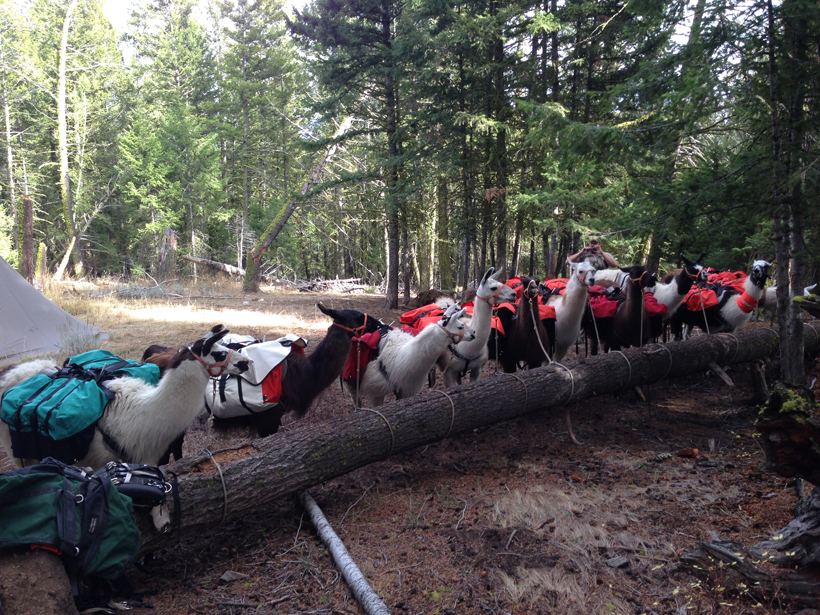 How much do they eat?

Our biggest llamas can eat 6.5 pounds per day at max. When in the mountains they forage on the surroundings and there is no need to pack in feed for them. You only need to pack in feed if you are using llamas in fall conditions or have low forage available at your chosen camp site. We pack in 2 to 3 pounds of alfalfa or mazuri llama pellets per day per llama on trips where we will have poor quality forage.

How often do they drink?

We have had llamas go 3 to 4 days without drinking in the backcountry. This is not recommended but sometimes they choose not to drink. They need very little water compared to horses or mules. When in the backcountry we give them water every day, but often they will only drink small quantities.

What kind of care do they demand in the back country?

Once at camp the llamas get staked to the ground with a 20 feet lead rope and can stay there as long as they have forage. We always make sure to pack enough water for us and the llamas for the first few days. Then we seek out water sources for the rest of the time. For example, it is good practice to check on them in the morning before hiking out and check on them at night once the hunting day is over. I don’t worry about them as much as the horses we have had when leaving camp for the day. Llamas can be very easy keepers. If one gets loose they typically stay next to camp with the other llamas. They are herd animals and like to be together.

How much do they weigh?

How much can they carry? 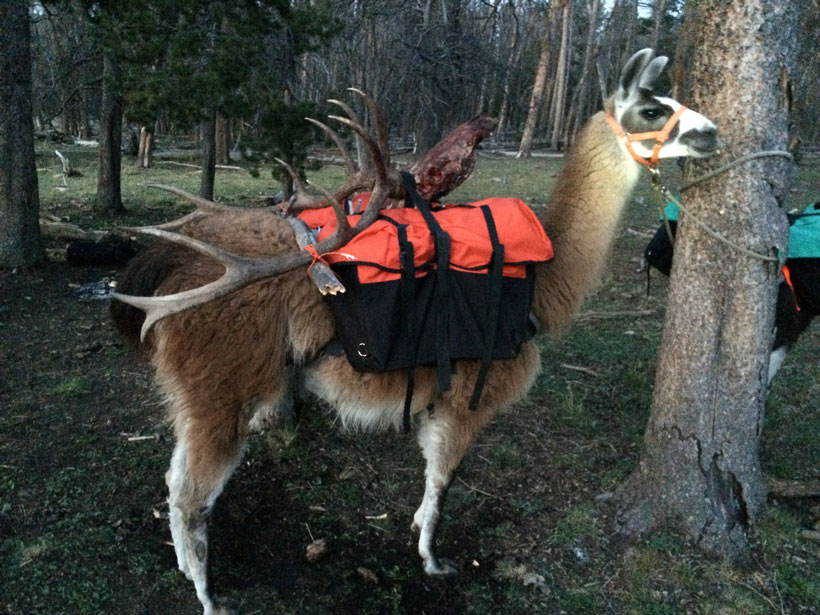 How far or fast can they go?

Llamas can go more than 15 miles per day packing 20% of their body weight in rough terrain. Llamas will hike right behind you and never clip your heels if trained correctly. Good pack llamas have a long stride and can match the pace of most people. The maximum speed for them without breaking their walking stride is typically 2.5 to 3 mph. Humans have a natural walking speed of 1.5 to 2.5 mph.

Do they have a problem with the smell of dead game such as bear, elk, wolf, and deer?

We have packed elk, deer, moose, bighorn, coyotes, wolves, and mountain lions on multiple llamas and never had one llama spook or be uneasy. 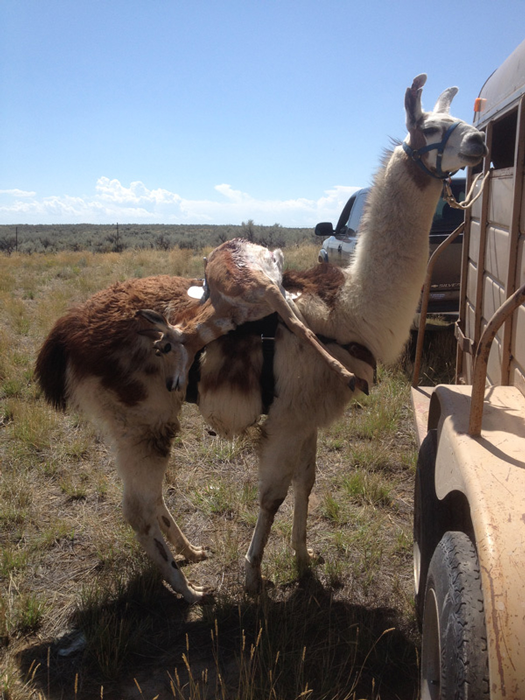 How many does it take to pack out a deer?

One llama will pack out an entire quartered out deer head and all. For large mule deer and long treks it would be advised to use two lamas to do pack it out.

How many to pack out an elk?

Two llamas can pack out a quartered elk including back straps, tenderloins, neck, brisket, rib meat and the head. For very large elk three llamas are best, especially if you are going more than 8 miles in steep country.

Do llamas do well in hot dry conditions and cold winter conditions?

Llamas regulate temperature exceptionally well. They can have problems in the extreme heat and extreme cold. I have had them in -25 degrees and deep snow on a Montana mule deer hunt and 106 degrees on a desert antelope hunt. Both times we took the necessary precautions to mitigate any problems or injuries the llamas could face and had no issues to speak of. 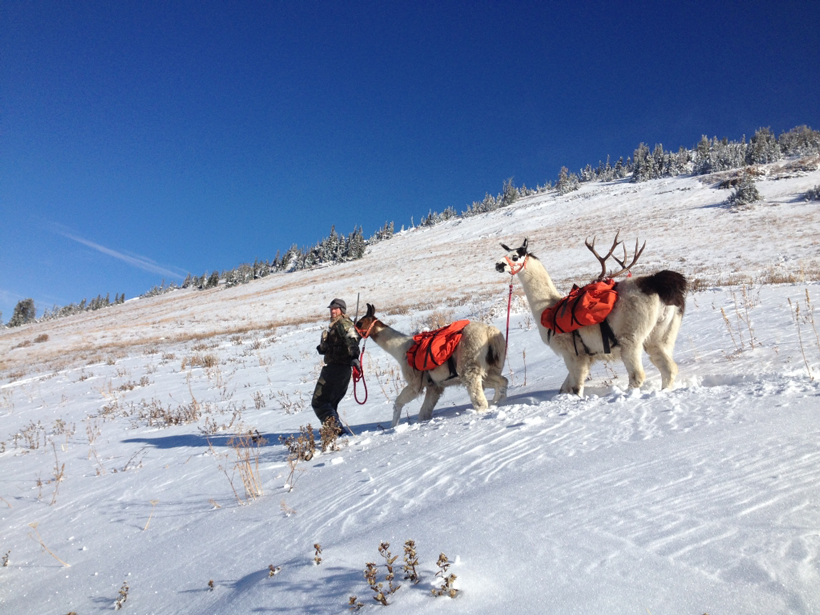 Yes, they do but only at each other or when in danger. I have never been spit on from any of our packers, but have been spit on by a protective mama llama protecting its baby. 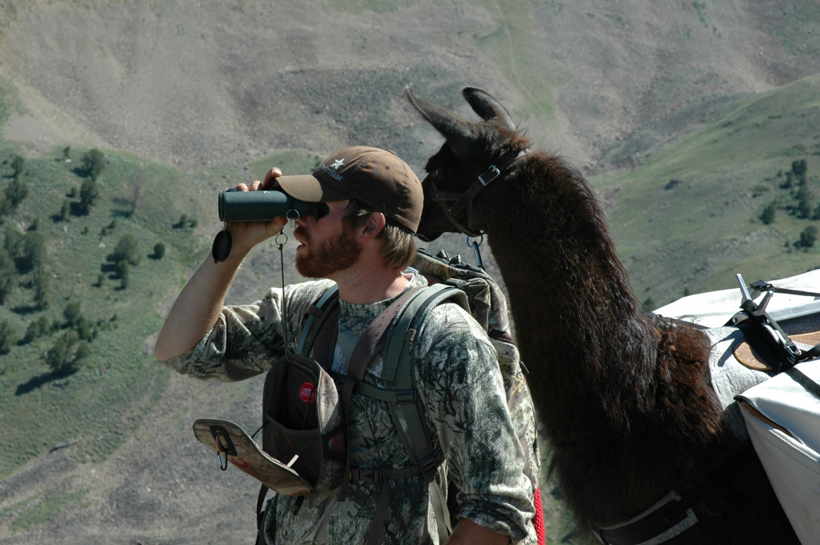 Do you have to put shoes on llamas like horses?

Llamas do not wear shoes like a horse; they have a split toe like bighorn sheep or mountain goats and have a soft pad much like a dog or camel. This gives them ultimate balance, stability and traction in steep, rocky, cliffy, loose or hard terrain.

How do they do in grizzly and wolf country?

Llamas are very alert and attentive and know when something is wrong. If they see or sense a wolf or grizzly they make a loud alarm sound with their voice that alerts you and warns off predators for the most part. We have never had any backcountry attacks, but have had grizzlies in camp. The alarm call from the llamas saved the day. An old outfitter trick we also like to use is to bring a radio and extra batteries and leave it on when we leave camp. This has helped over the years as well. 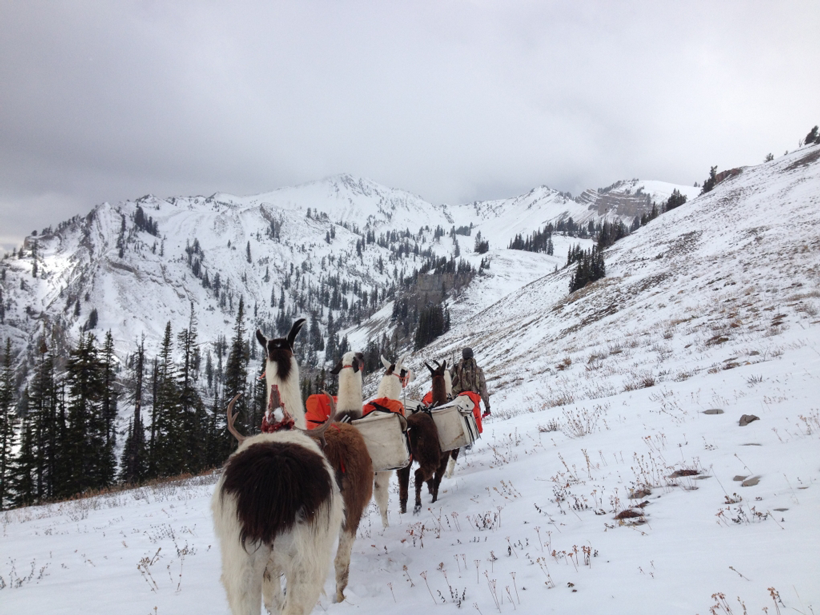 Can you ride llamas?

Adults cannot ride llamas. If your kids want to ride them and weigh less than 90 pounds then yes, they can ride them. We make saddles for kids and it makes the backcountry more accessible for families. 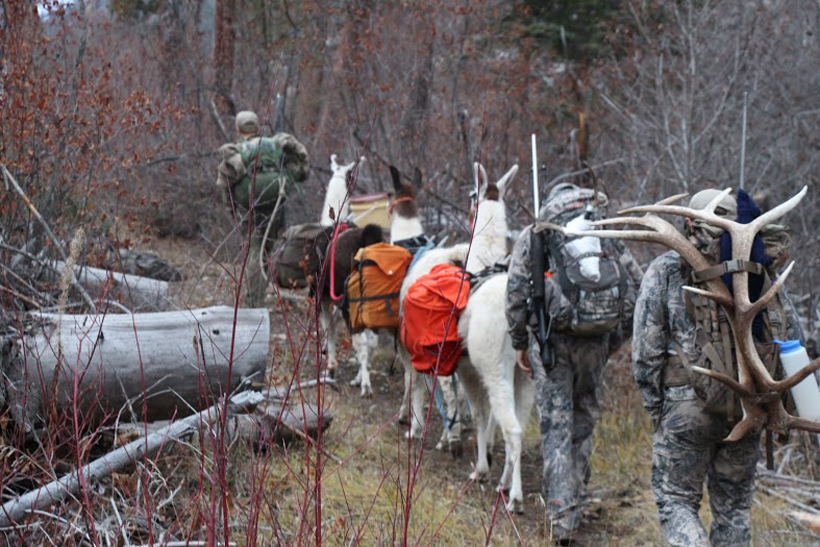 How much does it cost to care for a llama each year?

How much do they cost?

Good trained packers are usually at least four years old or more and have over 500-1,000 light duty to medium duty miles of pack experience in the backcountry. Prices range from $1,500 to $4,000.

As you can see llamas are not horses or mules or goats. They are not better or worse than any pack stock out there. Llamas have a very unique place in the pack industry, especially for the serious backcountry hiker, hunter or angler looking for an edge on the competition. Llamas help you stay higher longer, eat better, hunt harder and save your body, allowing you to hunt for years to come.

There is only one catch to llamas: you cannot just pack with whatever llama you find in the classifieds if you’re looking for a long term quality packer. I have found some great packers this way but generally it does not work out. The best pack llamas have been bred for 6,000 years by the Inca civilization. You will know a good pack llama by its conformation, stride and at the end of the day testing it on the trail. We like to pack with very athletic, strong, tall llamas that have sound confirmation and look like they can pack. Typically they are short wool and are referred to as classic llamas, short wool llamas, or Ccara llamas. They can be very tall at the shoulders, but typically are around 46” at the top of the shoulder. When you have found a strong, graceful, intelligent, and extremely powerful llama you have hit the mark. There are very few left llamas like this in North America but they do exist. My wife and I have worked hard to have the largest breeding operation in North America of Ccara pack llamas. You can find out more information at Wilderness Ridge Trail Llamas.