Decision time – learning when to make your move while hunting 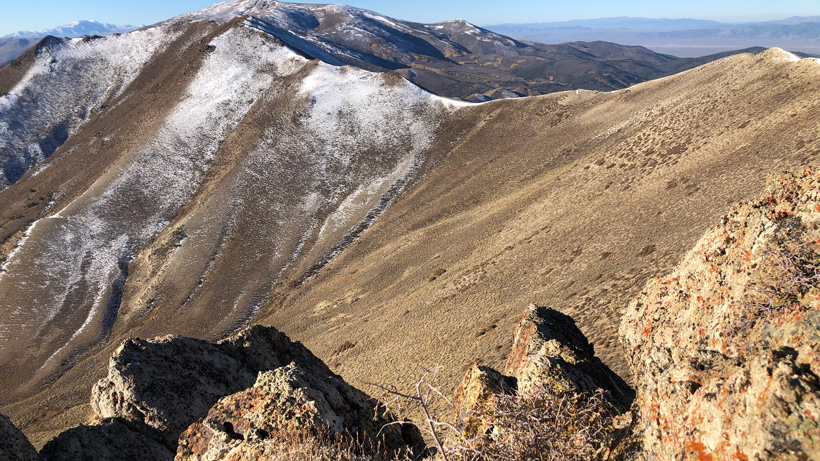 You’ve just spent the morning at a phenomenal vantage point, looking over miles of terrain trying to find that buck that gets your heart racing. Occasionally, we find him, but usually morning turns to afternoon and afternoon to evening and we head back to the tent at night hoping that tomorrow brings new opportunities — and bigger bucks. I think it’s safe to say that most of the time or, in fact, nearly all of the time, the bucks win and we have to regroup with a change of strategy, location or renewed commitment to our pre-hunt plan. However, on occasion, we do find the buck we’re after and the decisions we make in the moments right after we do typically dictate the success or failure of the day.

My 2021 Nevada mule deer hunt was a straight-up struggle. I drew a tag in a unit that had a decent reputation and I was interested in trying something new. I have my bread-and-butter units in Nevada, but really wanted to test my mettle in a new unit to see if I could deliver a good result in an area I had never been to. Preseason scouting was very difficult — to the point that I was excited to see five deer in an entire day. It was very slow. There is no question that significantly warmer than normal temperatures and drought were affecting the deer and my typical approach simply wasn’t delivering good results. I scouted hard, spending about 12 days in the field. I went high and low, spending hours behind my binoculars and spotting scope.

The terrain was typical of Nevada: lots of sagebrush with spotty cedar at mid-elevations and pines up above 9,000’. I developed a plan to get high on opening day; over 10,000’ where I would be able to see down the north and south sides of the range I planned to hunt. If you’ve never hunted central Nevada, it feels like you’re on the moon. It’s so remote and removed from anything that would resemble civilization, but also heaven for a diehard backcountry hunter. Opening day and the opening weekend came and went with little action. I saw very few deer and only a couple of bucks that required a little extra attention. The biggest was a 160” young 4-point that ultimately got a pass. It was five days of difficult hunting with low clouds and blowing snow, but my resolve remained strong. I had another 10 days to hunt and was certain I would turn something up. During the second weekend, I was fortunate to have another five days off from work and planned to hunt country that was lower in elevation as I just didn’t see what I had expected to up higher when I got a break from the weather. 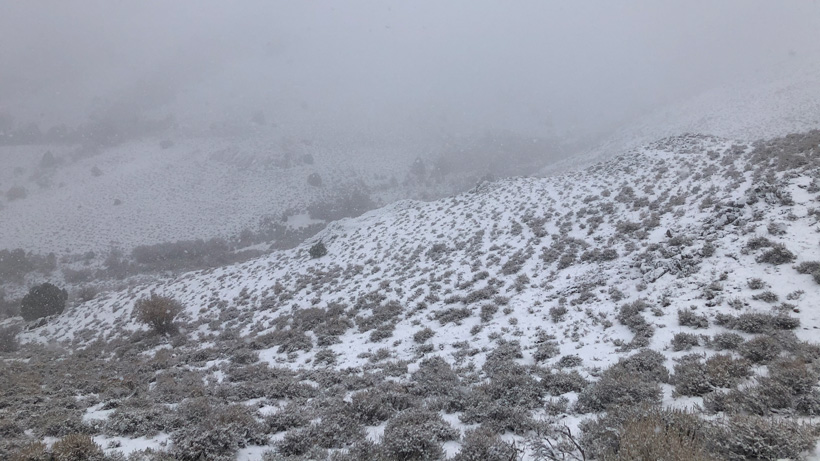 I chose a small range with a north-south orientation that was roughly six miles long. I invited my dad to come and be a second set of eyes; he’s still my best hunting partner so I was looking forward to spending a few days in the hills with him. We were up before first light, having hatched a plan that would end with my dad picking me up at the southern end of the range late in the day after I had traversed and hunted from north to south. I left as the very first rays of the morning light began to beat back the dark of night. I worked my tail off all year long to stay in excellent physical condition and was able to make short work of the hike to the top of the range. The country was absolutely beautiful and every time I stopped to glass, I was convinced that I was going to see deer. There were long, small drainages that led away from the ridge I was on and I knew there was water there from digital scouting. Chukar were frequently squawking at me. There was gorgeous brush toward the top of the ridge and a handful of cedar trees that eventually transitioned to sage as the elevation lowered. Despite the beautiful country and my resolve, I wasn’t seeing any deer.

I did see many wild horses that are incredibly territorial when you come across them. I’ve been charged by more horses, specifically studs that were upset I was in their turf, than I ever did bears while working in Bristol Bay, Alaska. They are an absolute nuisance and horrible for the native species of Nevada. The presence of so many wild horses had me seriously questioning my decision to hunt in lower country.

As I continued south on the ridge, I jumped a couple of bucks below me. I was absolutely stunned at how tight they were staying. I had walked no more than 75 yards past them while making a small loop to glass into a little drainage off the top, but they didn’t bust until I got on top of them. Neither of them was a shooter but they did generate a bit of excitement to what was an uneventful morning. As I continued to head south, my motivation stayed high even though I could sense that my focus was slipping. Instead of literally scouring the terrain, I started to notice that I was seeing the country/terrain through my binos and the effort to dig up a buck was waning as I was brushing over areas too quickly. I began to tell myself to “Stay in the game and good things can happen.” I reached the end of the range and sat down to glass roughly two miles out in front of me. Just then, there was movement. It was about a mile out and I knew right away that I needed to get my scope on this buck as he was moving into a small drainage and I only had about 30 seconds before he would be out of sight. I carry my spotting scope on the outside of my pack so I was able to get it set and on him in about 15 seconds. I knew right away that he was the type of buck I was after, considering how scouting and the start of my hunt had gone. I was now faced with the “right after” that I mentioned previously in this article. Do I move quickly or do I take my time getting to him? Do I come across high or low? Do I anticipate when I think he’ll bed again or do I get there as soon as I can? Anyone that has spent a decent amount of time in the hills chasing bucks has certainly asked themselves these very questions.

It’s so important that over the next few minutes you put aside the adrenaline of finding a good buck and really, really analyze the situation. For me, especially in the situation I was in during this hunt, I typically choose to be aggressive. I don’t mean aggressive in the traditional macho sense, but, rather, aggressive in that you’re making moves and not waiting for the buck to make his. This isn’t to say that I haven’t decided to be patient and let the situation play out in other instances, but I prefer to avoid the anticipation of what the buck will do — and in some ways — force my preferences on him.

I’m a huge advocate for being fit in the backcountry — not because I like to preach or look good at the lake, but because I truly believe it helps you be a better hunter. I had already covered six miles that day, but absolutely flew across the range to close the mile gap to the buck. I knew that I had adequately glassed the terrain between us and quickly got to 400 yards. To a lot of hunters, it may seem crazy to be so aggressive, but, for me, it is critical to make a move while I know where the buck is at, helping me make decisions as I get closer. The longer you take to get there, the greater the chance the buck has moved beyond your reach or into a different location than where you had previously anticipated. If you can’t be certain of the buck’s whereabouts as you get closer, how can you effectively make decisions? Now, this isn’t to say that being aggressive is always the best path – it’s important that you take a moment and think through the scenario and make a move most suited to your current situation. It just so happens that moving quickly usually aligns with mine.

I was able to slowly crest the small ridge that the buck had just fed down and peeked over — just in time to see him bed. I’m certain that had I not gotten there so quickly, I wouldn’t have had a chance at this buck as he was very difficult to see once he bedded down. I slowly wiggled down, shuffling my feet and then my rear end, moving a couple of feet at a time, reaching the location I had planned to shoot from roughly 25 minutes later. I propped my rifle up on a stout sagebrush that I had kept in front of me as I snuck down the ridge and squeezed one off at 313 yards. It was the end to a challenging hunt, but I couldn’t have been happier with the result and now have another beautiful European mount on my wall at home. 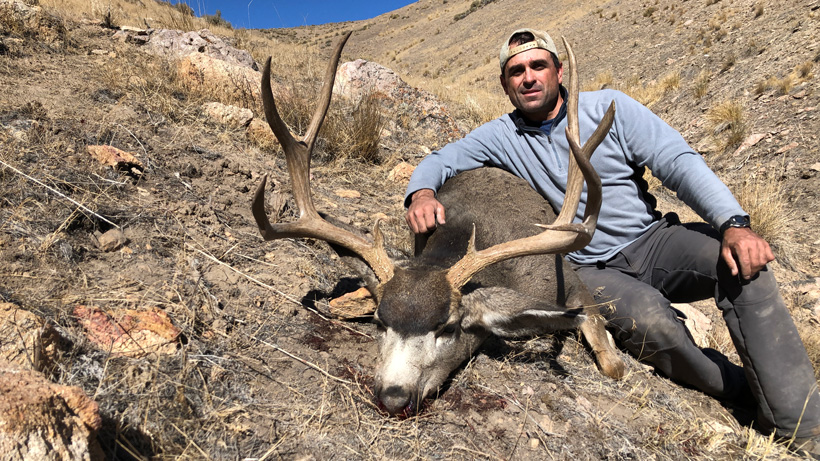 My experience has been that after you’ve found a good buck, you typically have a “window” of 15 to 30 minutes where the buck is comfortable in his setting and isn’t going anywhere too quickly. This window is where I choose to be aggressive. It only works because, in this window, I know where the buck is at and what he is doing, allowing me to execute a plan without having to wonder if what I am doing is going to spook the buck. Of course, this isn’t always going to work or be the right tactic, but it’s worked many times for me and might just work for you, too.