Check out an example of the type of data you'll have access to when you become an Insider. This page is only a limited sample of the data we provide on our 6,200+ complete Unit Profiles across the West.

Mainly public, rugged, and largely timbered with a network of roads and ATV trails. About 1,500 elk are found throughout the unit but they favor deep canyons away from roads. Private land is limited and well posted.

Considered as royalty in the lineup of Utah's top elk units, the Pahvant Range produces many bulls, with a few bigger bulls every year. Some hunters say trophy quality has diminished since the state added a late rifle season about five years ago.

The west side of the unit is steep, while the east side is more subtle and rounded, especially in the south. Ridges running east and west down the mountain provide many deeply timbered, north-facing slopes ideal for holding elk.

Low and mid-elevation foothills are dominated by thick pinyon pine and juniper forests. At middle altitudes the pinyon and juniper stands blend into large aspen forests with firs, mahoganies, oak brush and ponderosa pines along with grassy undergrowth and luscious mountain meadows. High elevations have large pockets of pines mixed with aspen groves that provide elk a sanctuary from daytime heat during early seasons.

The Paiute ATV Trail System, a network of more than 900 miles of ATV trails, runs through the spine of this unit and provides access to nearly any point of interest. The majority of the ATV trails are located in the southern portion of the area. Some roads are restricted to vehicles with a maximum width of 50”, but many can accommodate a pickup. Roads intersecting private lands are not restricted and are well marked. There are several hiking trails, off the main roads, that allow access to the steep canyons in the unit.

Unimproved campsites are along the roads on the Fishlake National Forest, which covers more than 90% of the mountains and most of the foothills. Motels are in towns on the perimeter of the unit in Fillmore, Salina and Richfield.

Species within this Unit

This unit has a lot of bulls to sort through. Take your time before choosing an animal. Don't hesitate to move hunting areas if you are not finding the trophy quality you want. Elk are found high and low, but good areas for glassing include Mount Catherine, White Pine Peak, and the Peavine area. Low pinyon-covered foothills are often glanced over but have produced high-quality bulls in the past. Look in private land near Joseph's Peak and in the southwest corner and try bugling at dark to locate bulls that are quiet in daylight.

Early season bulls are often in bachelor herds during the first part of the archery season, presenting hunters with a chance to compare antler size. In some places elk water in streams at the bottoms of canyons and move high on canyon walls to bed. Bulls can cover a lot of country once the rut starts. Hunters have had success using trail cameras to track animals, especially at water holes, wallows and mineral licks. During the first part of the season, several bulls are in bachelor groups and can be glassed early in the morning and late in the evening. Some hunters have been successful ambushing animals between watering and bedding areas. After the first week of the season, bulls start searching for cows, and towards the end of the season, bulls are vocal and respond readily to bugles. The bigger bulls usually have cows with them and rarely come to calls. Cow and spike bowhunters are also on the mountain during the first three weeks of this hunt and can be disruptive.

The rut will take place during the muzzleloader season, many bulls will have broken tines from fighting and tend to react on impulse to close bugling. Muzzleloader deer hunters are afield during this season and don’t usually disturb elk hunters, but increased pressure on the weekends tends to silence the elk. Centered in the peak of the rut, this season has high hunter success. Preseason scouting pays off because the biggest bulls tend to be harvested in the first few days. Bulls are vocal and easy to find but often stay in dense cover. High ridges offer good vantage points.

Some big bulls are taken during the late season hunt, but hunters must be patient because the rut is over and a lot of bulls are spending most of their time in dense cover. Several bulls are in bachelor herds in high, remote canyons. Some big bulls go off by themselves, find a remote canyon with a lot of cover, water and a grassy bench, and stay inside a small area for weeks at a time. These little honey holes are not easy to find, so plan to hike ridges and draws, glassing a great deal early and late in the day until you find a big bull. Snow can be a factor, and tire chains may be necessary. Spend a good deal of time behind binoculars searching for bulls with unbroken antlers. Focus on dense pinyon/juniper lowlands. Every year hunters kill some high-quality bulls that have managed to avoid hunters during earlier seasons. 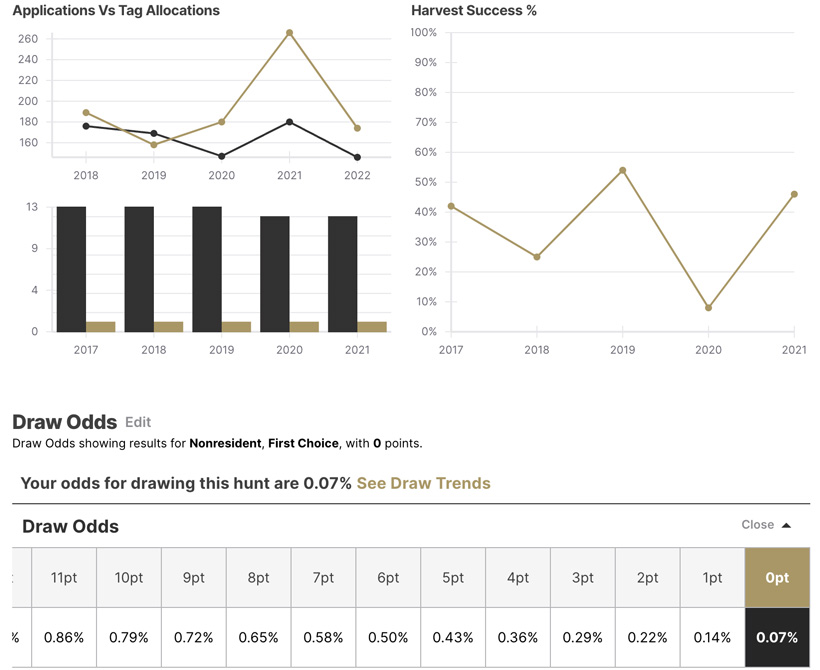 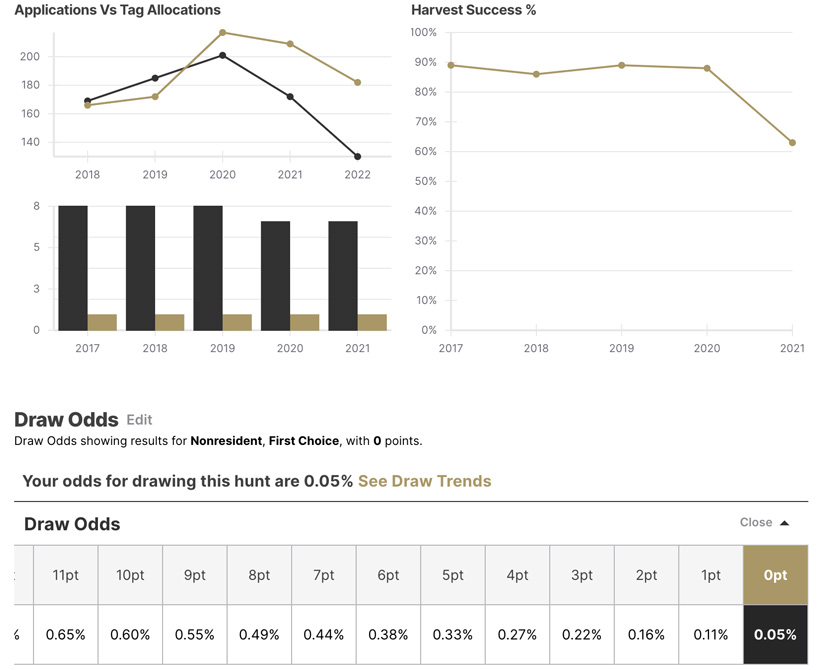 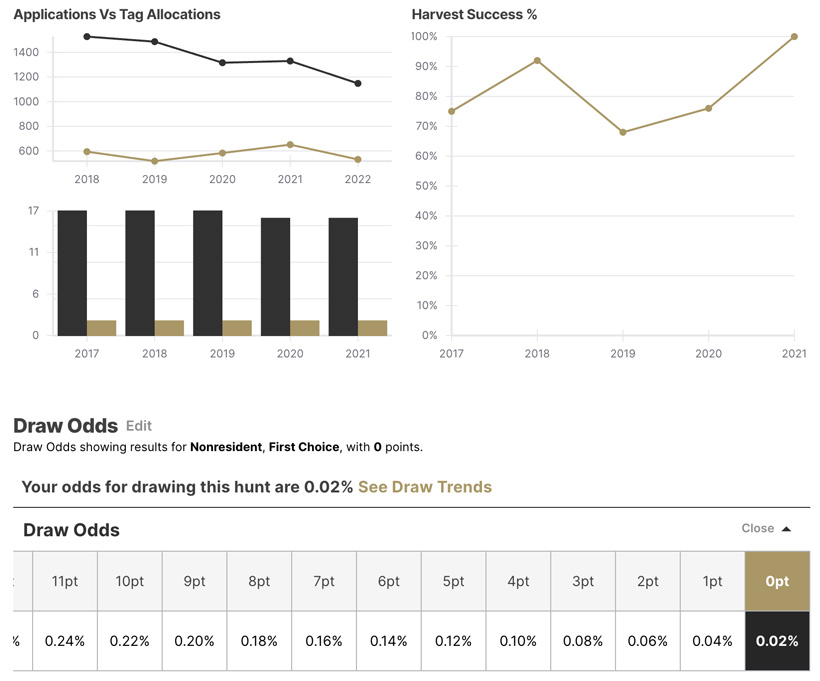 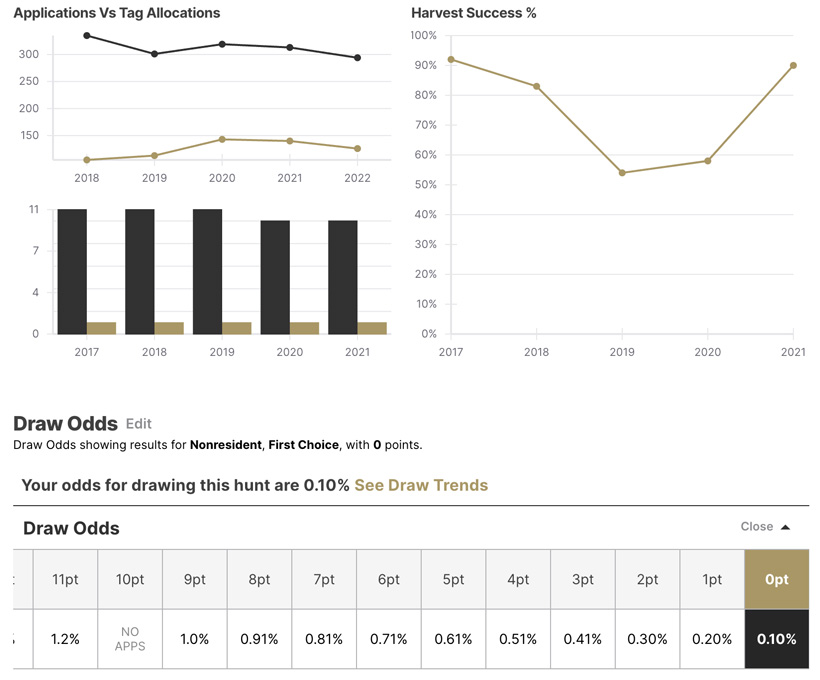 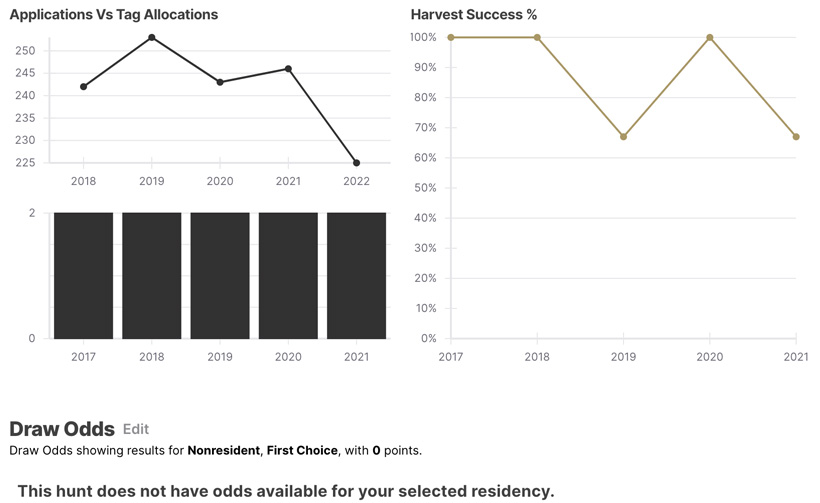