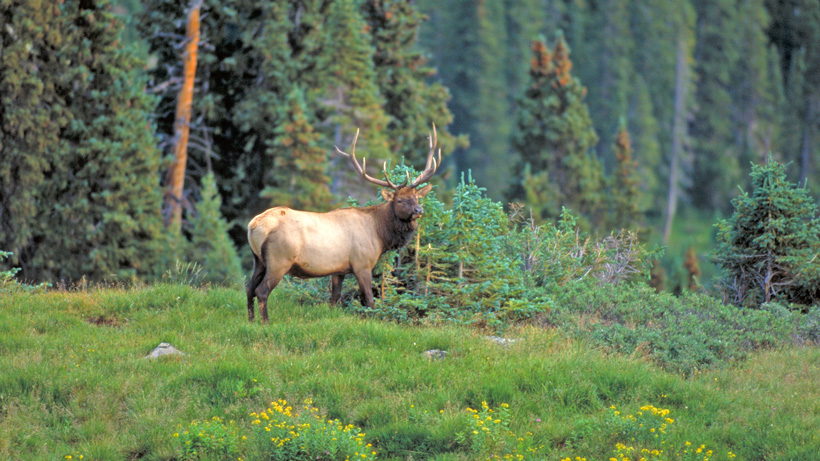 Wyoming elk herds are thriving and that’s a problem – so much so that there’s a task force looking at changes to how the Wyoming Game and Fish Department (WGFD) issues licenses. Their goal? Identify ways to pressure the herds that congregate on private land during hunting season. It’s a statewide problem with some areas more overpopulated than others. Elk in the Laramie Mountains, for instance, are “between double and triple” over WGFD’s 5,000-elk objective, according to WyoFile.

“Sometime in the late ‘90s, early 2000s, there was certainly a recognition that elk numbers really took off,” said Justin Binfet, WGFD’s wildlife coordinator for the Casper Region. He has managed the Laramie Peak herd for two decades.

As a result, WGFD decided to increase the population objective for the Laramie Peak herd from 2,250 to 5,000, said Binfet. The agency also allowed for “more intensive hunting,” doubling the number of licenses and “by 2009 distributed 5,000-plus tags” for elk area seven, which includes Albany, Carbon, Natrona, Converse and Platte counties. Yet, even with longer seasons and nearly 6,000 tags, elk numbers won’t go down if there’s plenty of private land where the animals can escape public hunting pressure.

“Area seven has a lot of public land. Access is miserable,” said Adam Teten, a member of the Wyoming Wildlife Taskforce. “Give out a million tags. You’re still not going to knock down the elk herd because there’s no way for hunters to get in there and be effective.”

Landowners and private outfitters have tried opening their land to public hunters for cow elk hunts, but that ended up being more trouble than it was worth.

“There were hundreds and hundreds of people coming in and out, and they did it dang near every day,” said Dax McCarty, supervisor of Wagonhound Ranch. “It took a ton of resources from the ranch and manpower and fuel.”

McCarty supports changes to the way licenses are issued like increasing the number of landowner licenses and allowing landowners to sell them though he acknowledges that those ideas won’t be popular.

While the 18-member task force has already recommended other changes like permitting a higher percentage of moose, bighorn sheep, mountain goat, bison and grizzly bear hunting licenses for residents, changing how hunting licenses are issued won’t be as unanimously supported and will be “a heavier lift,” according to WyoFile.

“If it were simple, it would already be fixed,” said co-chair of the taskforce Josh Coursey.