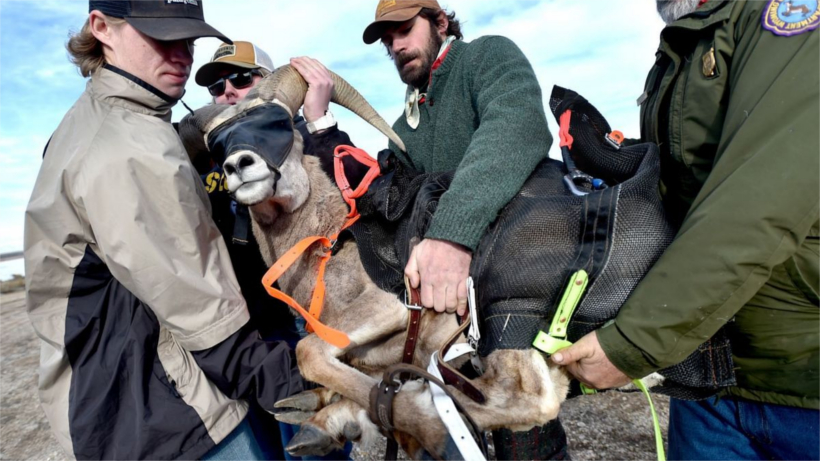 Last week, 20 bighorn sheep were relocated from the Devil’s Canyon herd to the Ferris-Seminoe herd in southern Wyoming. Through the use of net-gunning, huddling and helicopters, animals were carefully captured before being thoroughly examined by wildlife biologists. Once the lab work was complete, the bighorn sheep were transferred to horse trailers for their final trek to their new destination. Organized by the Wyoming Game and Fish Department (WGFD), the goal is to relocate 40 bighorns in total; another sheep capture is scheduled this week.

It is an intricate operation and involves countless biologists, helicopter pilots, WGFD veterinarians and rangers as well as volunteers from the Bureau of Land Management, the Wyoming Wild Sheep Foundation (WWSF) and members of the community to ensure that the capture goes smoothly. The first sheep were captured five miles north of the staging area by a helicopter crew from Native Ranger Capture Services in Elko, NV, according to The Billings Gazette. The company provides this service both nationally and internationally.

“We try to make sure that everything’s in order for this morning because it happens quick when it does,” Leslie Schreiber, WGFD wildlife biologist told The Billings Gazette. Schreiber has organized a bighorn sheep helicopter capture with the Devil’s Canyon herd for the last two years; each year, 25 animals were collected.

The Devil’s Canyon herd is targeted because the bighorn sheep seem to be thriving there – in good health and plentiful. Schreiber says that the herd is currently at 263 sheep; the goal is 200, which means there are enough to relocate to other herds to boost numbers. The Ferris-Seminoe herd is only 130 to 150 strong; WGFD would like a minimum of 300 bighorns in this herd.

So far, transfers like these seem to work well.

“What a blessing to be able to come out and see the fruits of our labor,” Dean Dijenno, secretary of the WWSF and a capture volunteer, told The Billings Gazette. “It’s exciting that we have an expanding range of wild sheep in Wyoming.”