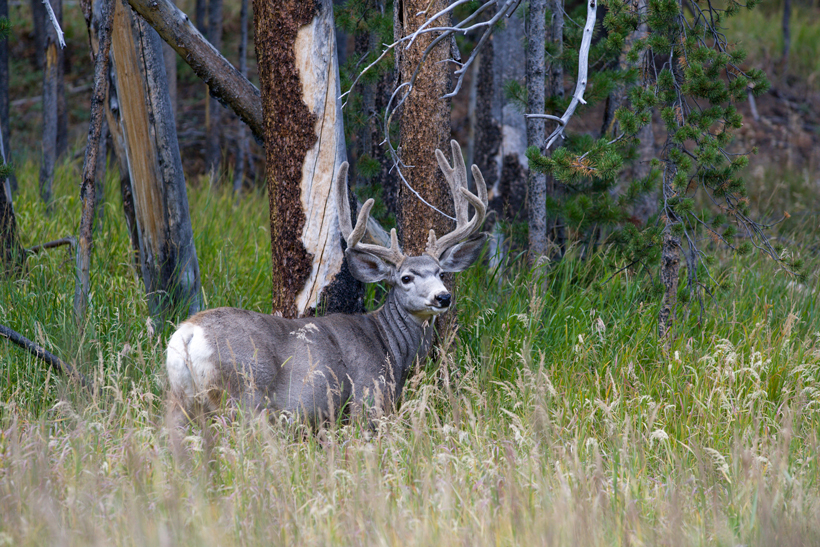 Thanks to a couple who tipped off Wyoming Game and Fish (WGF) of a possible poached deer on May 30, officials were able to link a freshly killed mule deer buck with a local camper. Yet despite conclusive evidence, Erik Rautenberg entered a plea of not guilty on June 1 in Park County Circuit Court.

Rautenberg is charged with allegedly using his 9mm Glock pistol to kill a buck mule deer near his campsite at Sam Berry Meadows in the Shoshone National Forest, according to the Cody Enterprise. He was released on a $10,000 signature bond on charges of poaching the deer and his pre-trial begins August 13.

Bill Oliver and his wife, who reported the incident, say that they were returning from a horseback ride along the Pahaska Trailhead when gunshots startled their horses. Mrs. Oliver spotted an individual shooting a gun followed by a deer running up the hill. Once they were out of sight, the Olivers say that they “heard a volley of approximately 7-8 additional gunshots,” according to the Cody Enterprise.

WGF Game Warden Travis Crane and Forest Service LEO Travis Hayworth visited the area the following day and heard several gunshots north of their location during the investigation. Crane and Hayworth were able to locate Rautenberg and his brother. According to the affidavit, Rautenberg says he was not shooting at or toward the deer and was instead aiming at a tree stump.

Yet Crane’s dog was able to easily locate the freshly killed deer, which was partially skinned with meat along the back bone removed. Crane collected the head and cape that contained the bullet entrance and exit wounds to transport back on a packhorse for further examination.

While Hayworth issued citations to the brothers for an unattended campfire and failing to collect garbage, he also collected Rautenberg’s gun and bear spray. Crane says that when he returned to the campsite he asked Rautenberg to tell him about the deer he killed.

According to official documents, Rautenberg confessed to killing the deer, shooting it once and then finishing it off since it was mortally wounded. He says he collected the back strap, cooked some, ate some and tossed the rest of it in the river, adding that his brother was so upset over the shooting that he refused to eat any of it.

This is another example illustrating the waste of poaching any animal. Hopefully Rautenberg will be properly convicted of this heinous crime.