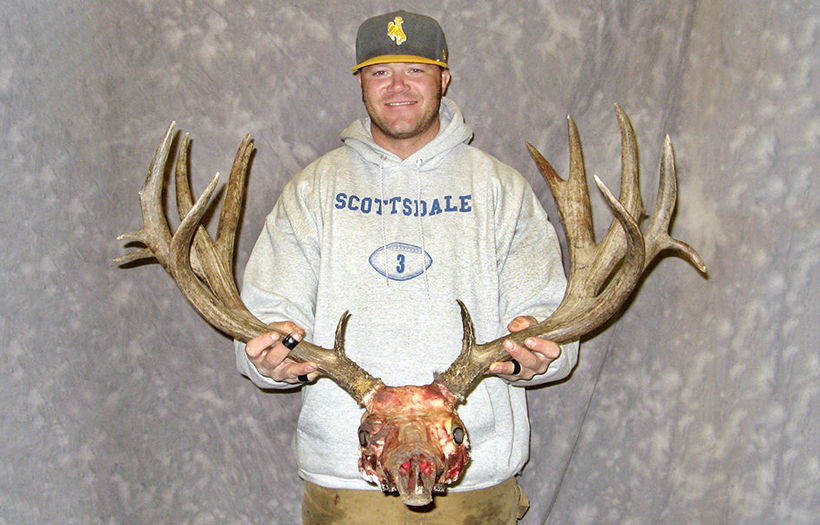 Backcountry hunting can be exciting as the chance to stumble upon the buck of any hunter’s dreams is always around the next bend. For Ben Daniels, who hunted in the backcountry near Cody, Wyoming, the odds were in his favor as he landed a massive 7-year-old mule deer buck.

Daniels, a lifelong hunter and son of longtime guide, Ron Daniels, along with hunter, John Marsh, used binoculars to glass the mountain side in search of bucks. In the distance, they spotted antlers that made them stop in their tracks.

“I spotted that deer when it was more than a mile away,” says Marsh. “The light was right on him.”

Settling behind a rock wall, Daniels used Marsh’s rifle, waiting for the right moment to take a clean shot. Daniels regularly hunts elk, but does not shoot much beyond 100 yards. He has harvested four mule deer in the last decade.

"He was bedded down, and it looked like a decent five-pointer," says Daniels. Little did he know the surprise in store once the buck went down. Because the distance was longer than normal for Daniels, his first shot sailed over the deer, causing the buck to spring to his feet in alarm. Luckily, Daniels’ second shot rang true at 456 yards, dropping the buck within seconds.

The two searched through the thick brush for the deer for a few minutes and they were rewarded with an incredible surprise once they found him. What they thought was a five-pointer turned out to be a giant buck with a total of 19 points and over 30 inches wide, weighing north of 250 pounds. Safari Club International scored the buck at 231 4/8", putting the kill up for record book consideration. Paperwork for a Boone and Crockett Club nomination is pending. The antlers measured 37 1/2 inches wide. In comparison, a typical good deer might have been 24 inches.

“I’ve hunted a long time and have never seen one with a spread over 30 inches,” says Marsh. “When you hunt hard you earn them. It was a big deer.”

Once the animal was field dressed, the men had a long hike out carrying the quartered meat through a snowstorm that dropped about two feet of snow at higher elevations. Regardless of the difficulty in the pack out, the elation that both felt kept them motivated and excited.

Daniels’ father, longtime guide Ron Daniels, had never seen a buck with a spread larger than 30 inches, and was incredibly impressed with the accuracy of the long distance shot.