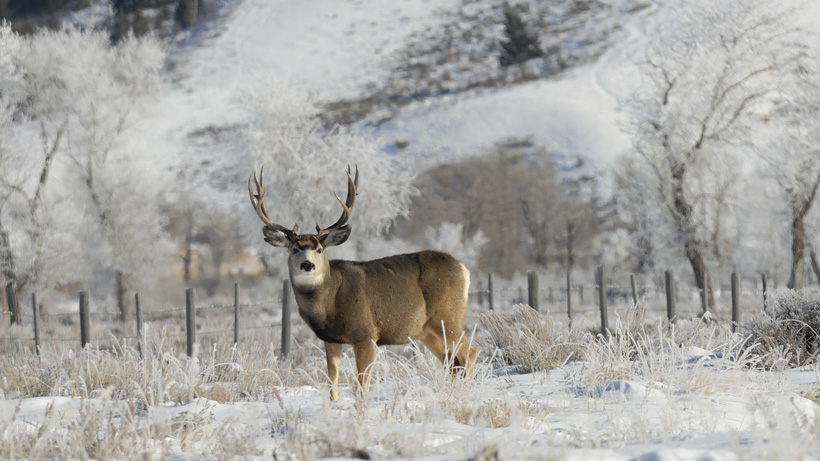 The Wyoming Game and Fish Department (WGFD) has partnered with the Upper Green Muley Fanatics Foundation, the Wyoming Wildlife and Natural Resource Fund and Jonah Energy to ensure that the Red Desert to Hoback mule deer migration route in Wyoming is easy for the animals to navigate. This means removing old stock fencing and installing pole-top wildlife friendly fence.

Last year, WGFD along with The Conservation Fund acquired the 364-acre Fremont Lake bottleneck property now known as the Luke Lynch Wildlife Habitat Management Area (WHMA) to keep development away “that would have fragmented migration,” according to a WGFD press release. This is one of the key mule deer migration routes in the West. Replacing old fencing helped not only mule deer, but also other wildlife that may travel the same route.

“Converting older fencing to a wildlife friendly design means that deer, moose, and other migrating game will not get caught in while enroute,” said Kyle Berg, Pinedale habitat access biologist. “It’s an improvement that will make a difference for mule deer migration, and Game and Fish is grateful for the support and volunteer hours invested in this project.”

Approximately 1.5 miles of fencing was removed and replaced in what officials believe is the “pinch-point of the migration route” – a route that mule deer use to move between winter and summer ranges every year. In fact, the Luke Lynch WHMA is the longest mule deer migration route in the lower 48. This area has been recognized as the “most threatened portion in this internationally-significant bi-annual Red Desert to Hoback Mule Deer Migration” by researchers at the University of Wyoming, WGFD reports.