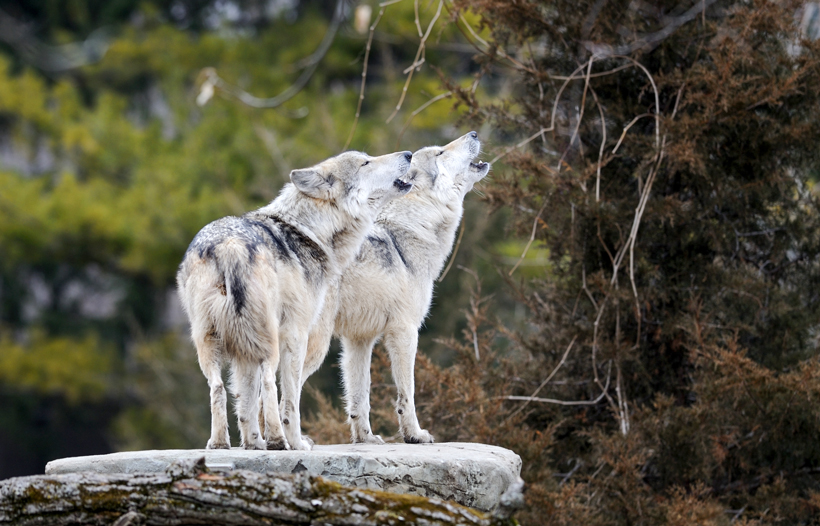 As part of the federal wolf reintroduction project in New Mexico and Arizona, two Mexican gray wolves were recently released into the Apache-Sitgreaves National Forest in eastern Arizona. Biologists believe that the female is pregnant.

The female was taken into captivity in January in order to be paired with a more genetically diverse male who was born at the California Wolf Center in 2008 before being moved to the U.S. Fish and Wildlife Service’s (FWS) Wolf Management Facility in New Mexico, according to the Albuquerque Journal.

The Mexican Wolf Interagency Field Team (IFT) comprised of FWS and the Arizona Game and Fish Department (AGFD) staff completed a “soft release” of the breeding pair. This means that the wolves will be confined within an enclosure until they chew through the fencing and self-release.

“The release of this genetically diverse pair of Mexican wolves will help us build on our recent success of reaching a population milestone of more than 100 wolves in the American Southwest,” says Mike Rabe, nongame wildlife branch chief for AGFD. “The methods used for their release help ensure that these wolves acclimate and behave as wild wolves.”

Many ranchers within the reintroduction area oppose the release of the pair regardless of the fact that they are able to receive compensation, or “payments for wolf presence,” under the Mexican Wolf/Livestock Coexistence Plan that was established in 2014. Compensation under the Plan pays ranchers for three reasons: payments for wolf presence, funding for conflict avoidance measures, and funding for depredation compensation. Local hunters are also upset at the introduction of more wolves in Arizona.

To make sure the wolves will become acclimated to living in the wild, the IFT will provide supplemental food until they learn to catch and kill native prey like deer and elk on their own. Officials say that this will help anchor wolves to the area.

“Improving the genetics of the wild Mexican wolf population continues to be our priority,” says Benjamin Tuggle, Southwestern regional director of the FWS. “Together, this pair will improve the genetic profile of the current Mexican wolf population, ensuring long-term viability. The female has experience living in the wild, increasing the success rate for the pair’s survival.”

What will this mean for deer and elk hunting in this area?