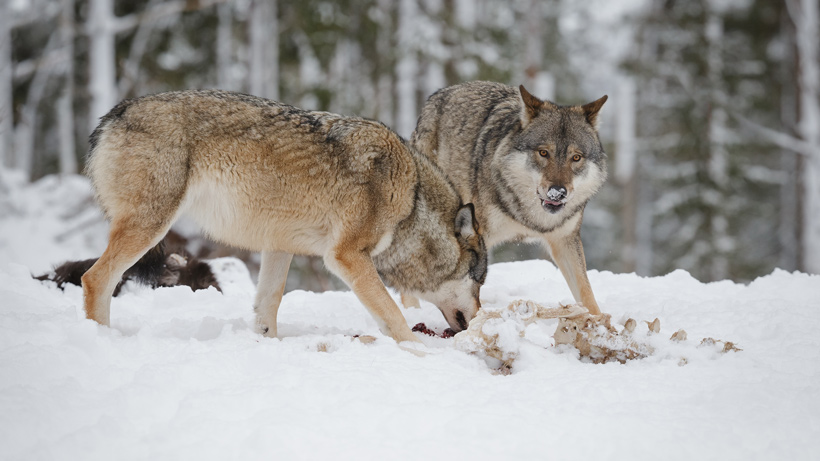 There are ten fewer wolves in northern Idaho after the state approved their removal. Over the past two months, the U.S. Department of Agriculture’s Wildlife Services (USDA-WS) has killed ten wolves in what’s known as the Lolo zone at the request of the Idaho Department of Fish and Game (IDFG). Why? To help dwindling elk herds that roam that portion of the state, The Spokesman-Review reports.

“At the request of Idaho, we did remove wolves in that region,” said USDA-WS spokeswoman Tanya Espinosa.

In late February and early March, USDA-WS workers used a helicopter to remove the ten wolves in the Clearwater National Forest. Over the past 25 years, elk herds that live within the Lolo zone in northern Idaho have experienced drastic population drops, going from roughly 16,000 to only about 2,000 animals. While IDFG says that wolves, black bears, and mountain lions are primarily responsible, habitat loss also plays a role. Regardless, eliminating hard-to-hunt wolves in the area is one step towards sustainable elk numbers. According to The Spokesman-Review, IDFG has “liberal harvest rules for bears and mountain lions, but wolves are more challenging to hunt,” hence why the agency uses other methods to keep wolves under control.

“We’ve made an obligation to try to manage this elk herd at levels at maybe not peak levels, but at least bring it back to levels that we’ve seen in the past that were adequate for hunting,” Jim Hayden, an IDFG biologist, told The Spokesman-Review.

IDFG does rely upon elk hunting license sales as a source of revenue and did use funds from its operating budget to pay for the wolf removal. Of course, the decision to manage wolves in this way has angered animal rights groups who say that IDFG purposely waited until the wolf removal was complete before the agency told the public.

“Now more than ever, Wildlife Services and the Idaho Department of Fish and Game need to be upfront with the public about their plans to kill wolves,” said Andrea Santarsiere, an attorney with the Center for Biological Diversity. “Idaho stopped monitoring wolves last year and stopped releasing annual reports revealing how many wolves remain in Idaho. It’s troubling to see this ever-increasing veil of secrecy fall over the management of Idaho’s wolves.”

IDFG says there are more than 90 wolf packs that roam the state and, within the Lolo zone, there are at least 11 packs. This means that there are “roughly 65 to 100 wolves in the Lolo zone,” according to The Spokesman-Review. The state is required to maintain a minimum of 15 packs to retain management of the wolves.

Idaho officials say that, if necessary, they may remove more.