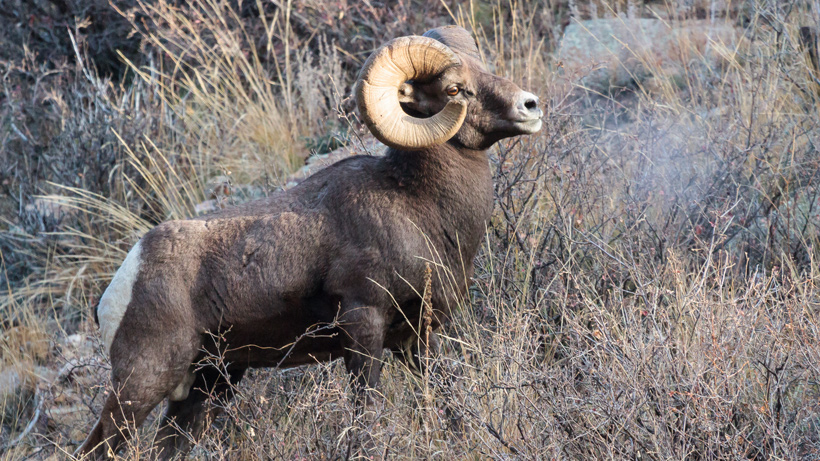 Some bighorn sheep were collared; others were relocated following a Feb. 21, 2019 initiative targeting 28 bighorn sheep on Chelan Butte in Washington. Staff with the Washington Department of Fish and Wildlife (WDFW) and Utah Division of Wildlife Resources (UDWR) along with volunteers from the Wenatchee Sportsman’s Association and Washington Wild Sheep Foundation participated in the day, capturing a total of 28 animals—20 of which were relocated to the Stansbury Mountains in Utah, according to WDFW.

The bighorn sheep were lured by bait and, once inside the humane trap similar to a big corral, “a trigger is pulled to drop an encircling tarp wall around the animals,” according to WDFW. Once captured, animals were tested for “a variety of pathogens” (including Mycoplasma ovipneumonia, which has caused massive die-offs in wild herds). Then, eight of the captured bighorn sheep were outfitted with GPS collars to track health, habits and movement. The other 20 were transferred to Utah.

“The trap worked as well as could be expected and in our initial capture we were able to corral approximately 40 animals,” said WDFW Assistant District Biologist Devon Comstock.

Only 28 animals were used for this initiative; another 12 were released back into the wild.

Washington’s bighorn sheep population has made a good recovery since the animals were eliminated in the early 1900s thanks to a successful relocation effort in 2004 when 35 sheep were brought in from the Cleman Mountain Herd, according to WDFW. Those 35 sheep have grown to about 200 today. By moving some of the Chelan Butte herd to Utah’s Stansbury Mountain herd, the hope is that it will help maintain genetic diversity and, eventually, expand the overall range of the herd in Utah.

“The Utah Division of Wildlife Resources is very grateful to WDFW for offering these animals, this project will benefit healthy wildlife in Utah as well as the people who enjoy them on the landscape,” said Jace Taylor, UDWR Bighorn Sheep and Mountain Goat Biologist.