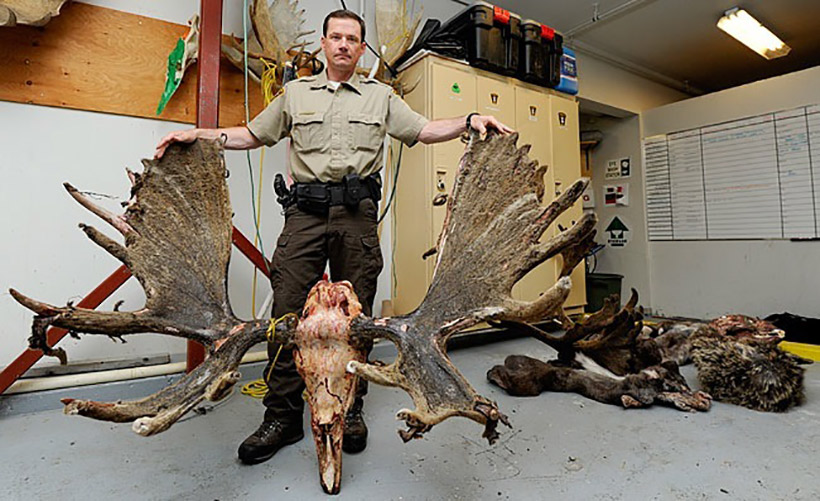 Ryan Hennings, manager of enforcement and compliance with Environment Yukon, displays the moose trophy from a 2011 hunt by Dougan and Tallerico.
Photo Credit: Yukon News

An American big-game hunter and his Canadian outfitter has been charged and fined for wasting meat and hunting illegally in Yukon.

The charges date back to 2011, when Wyoming resident Brian Tallerico hired outfitter Abe Dougan to guide a hunt in the Yukon. The two men arrived in the region on August 16, 2011 and were joined by two other individuals, including a photographer.

Tallerico had come to Yukon with the intent of harvesting a Stone Sheep, as he was working towards a North American sheep Grand Slam. The title is earned after hunting the four different North American wild sheep - Dall, Stone, Bighorn and Desert Bighorn. The Stone sheep would have been Tallerico’s second of the four.

Within minutes of landing, however, the group spotted and photographed a caribou. They shot and killed the animal within just two hours rather than waiting the required six hours following their flight.

“The six-hour rule is aimed at ensuring fair chase and the offense is commonly referred to as hunting by aircraft,” explains Environment Yukon.

Over the next four days the hunters also killed a sheep, a moose and a grizzly bear. But when the men returned back to the Environment Yukon office to get the required export permits needed to take the trophies back to the U.S., they only presented about 211 pounds of moose meat.

Typically, a boned-out moose weighs 450 pounds, a caribou about 225 pounds, and a sheep between 60 and 65 pounds. That makes an expected total of 740 pounds, over 500 more than what Tallerico and Dougan presented.

Conservation officers immediately became suspicious of the group, prompting them to seize the trophies and begin an investigation. They visited the area that the group had been hunting and discovered a considerable amount of wasted meat.

When questioned about the caribou, Tallerico and Dougan said that they killed the animal a day later than they actually had. Dougan also maintained that the sheep was killed in northwestern British Columbia, where he was licensed to hunt sheep.

But digital photos seized from the hunt showed that the men lied about the date of the caribou kill to conceal the fact they hunted within six hours of flying. Another photograph entered as evidence at the trial clearly shows Dougan with a sheep near a mountain that is in the Yukon, just north of the British Columbia - Yukon boundary.

With such decisive evidence against them, Brian Tallerico and Abe Dougan plead guilty in Yukon Territorial Court. They were sentenced on Wednesday.

Dougan is also facing 12 additional charges in British Columbia for further violations of the Wildlife Act.

The fines will go towards the Yukon Fish and Game Association TIPPS poachers fund.

Dougan will be making his next court appearance December 8, 2014 in Kamloops.