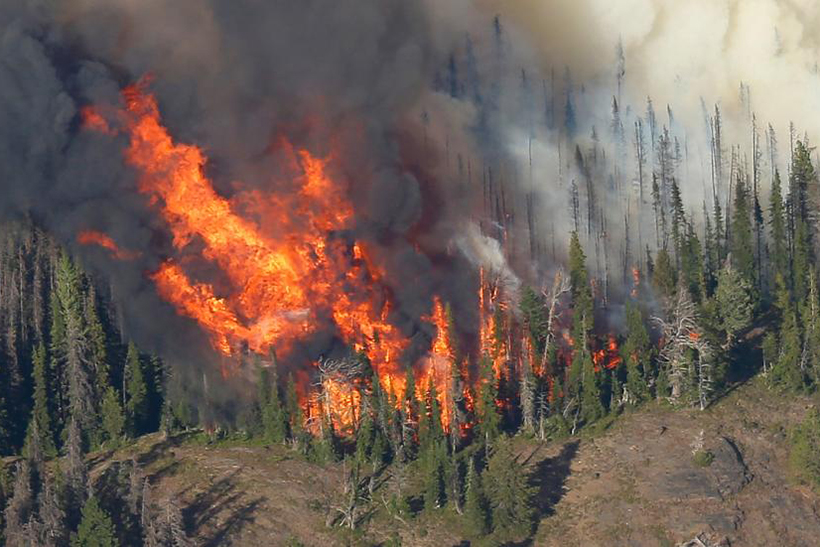 The largest wildfire in the history of Washington state has destroyed more than 250,000 acres in the Carlton Complex east of Seattle. Several isolated areas are still burning, but wildlife managers are now faced with a new problem: how to help thousands of affected mule-deer.

The Carlton Complex fire has scorched more than 25,000 acres of habitat across five wildlife area units, which are home to a large local mule deer population and an important resting ground for thousands of migratory deer during the winter.

It has also destroyed about 100 miles of game-proof fencing necessary to keep wintering deer out of orchards and irrigated crops.

“A fire of this magnitude will have both short and long-term effects on wildlife populations and the landscape and that will have implications for hunting and grazing in the area,” Jim Brown, Washington Department of Fish and Wildlife (WDFW) regional director, said in a press release. “This is not a problem with easy answers.”

Even if weather conditions are ideal, biologists believe there are likely to be too many deer to support this winter and quite possibly for several years to come.

“We know we need to take steps to reduce the size of the herd,” Scott Fitkin, a WDFW district biologist, told the Missoulian. “That effort will focus initially on minimizing conflicts between deer and agricultural landowners.”

Forced out of their normal habitat by the fire, the mule deer are struggling to find food and coverage wherever they can. Many have roamed into hay fields, orchards, pastures and other nearby farms.

State wildlife managers are working alongside local property owners to protect their crops from the displaced deer.

“We expect more issues to arise as migratory deer return to the area this fall, but we are taking steps now to minimize those problems,” Hellen Heilhecker, WDFW wildlife conflict specialist in Okanogan County, said to the Bonney Lake Courier Herald.

The agency is seeking state and federal emergency funding to repair and replace a limited number of fire-damaged fences. They are also planning to draw deer and other wildlife away from agricultural lands with feed this summer and fall and is considering a deer feeding program this winter.

Biologists, however, are reluctant to approve a winter feeding program. Sustained supplemental feeding is neither efficient nor beneficial to wildlife and often leads to greater problems. It draws deer into dense concentrations, increasing their vulnerability to disease, predators and poaching. It can even exacerbate habitat damage — as Wyoming has recently seen with its elk winter feeding grounds.

“Winter feeding is not a long term solution,” said Fitkin. “At best, it’s a stop-gap measure until the deer population and habitat are back in balance.”

Instead, the WDFW says that it is more inclined to increase the number of anterless deer permits available to hunters. The department will directly contact hunters who had already applied for deer permits in the area so that new paperwork is unnecessary.

“We know we need to take steps to reduce the size of the herd,” Fitkin said. “That effort will focus initially on minimizing conflicts between deer and agricultural landowners.”

These plans are contingent upon how conditions progress towards winter.

In the meantime the WDFW will be working with other government agencies on restoration efforts including timber salvage and weed control. The department is planning to re-seed shrubs and bitterbrush on department lands within the burned areas. Unfortunately, it will take a number of years before these plants to be fully grown and sustainable.

The department will also likely close roads in some wildlife units due to hazardous trees. This could impair hunting access in the burned areas this fall. Flooding and erosion pose additional challenges for the agency.