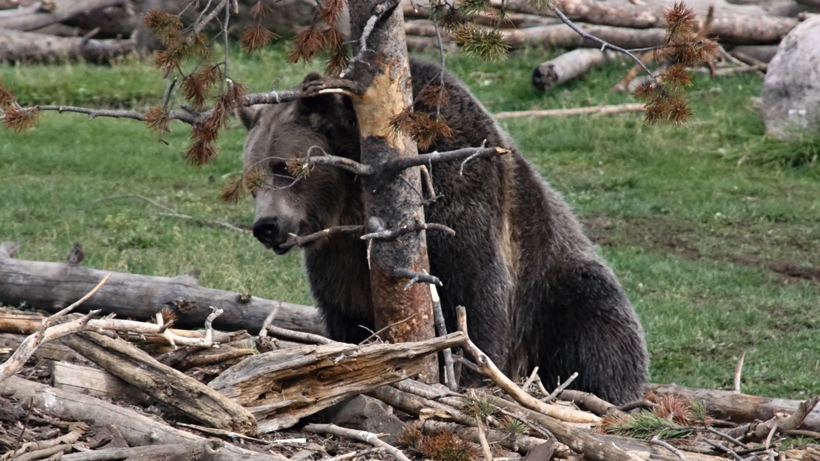 Washington biologists have a new bear to keep tabs on – the first female grizzly captured in the state in 40 years. Last week, the Washington Department of Fish and Wildlife (WDFW) confirmed that the sow, which was captured 10 miles from the Washington-Idaho state line, is now outfitted with a radio collar so biologists could track her whereabouts along with her three cubs, the Capital Press reports.

“Grizzly bears once occupied much of the Cascade and Selkirk Ranges, but their numbers were severely reduced as a result of persecution by early settlers and habitat degradation," said Rich Beausoleil, a biologist with the state. "Grizzly bear recovery started in 1981 and it took 40 years to confirm the first known female in Washington.”

The female bear was first captured on trail cameras within the Selkirk Grizzly Bear Recovery Zone in the Selkirk Mountains. It is one of six recovery zones in the U.S. According to the Capital Press, the current grizzly bear populations that stretch between northern Idaho, northeastern Washington and southwestern British Columbia are “considered healthy” and “growing about 3% a year.”

WDFW biologists say the female they captured and collared is a resident bear.

“A group of bears — a mother and three cubs — were photographed on another occasion on a game camera in the same area three to four weeks prior to the capture,” said Wayne Kasworm, a grizzly bear biologist with U.S. Fish and Wildlife Service. “The natal collar — the white ring around the neck — of one of the cubs leads us to believe this is the same family of bears.”

"Currently there are believed to be at least 70 to 80 grizzly bears in the Selkirk Grizzly Bear Recovery Zone,” said Kasworm. “About half those bears live on the Canadian side of the border, with the other half on the U.S. side.”