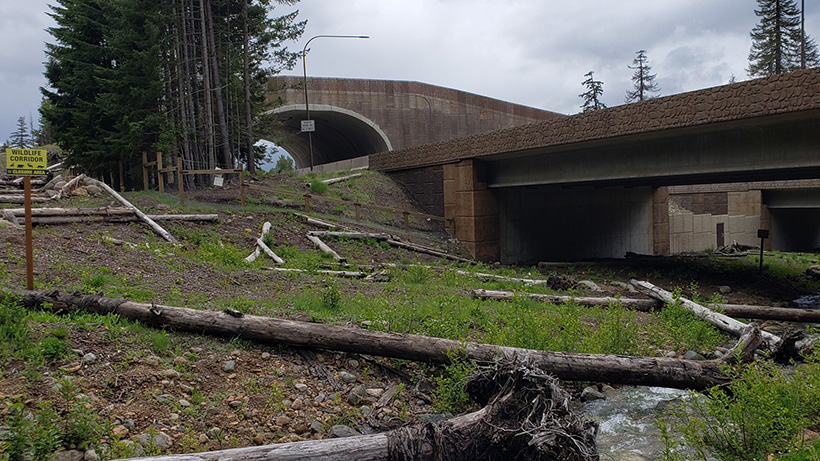 Washington is moving ahead with the multi-phase construction of wildlife crossings that span 15 miles along Interstate 90 between Hyak and Easton. The Washington State Department of Transportation (WSDOT) began Phase 3 earlier this year, according to Channel 5 News.

I-90 runs through the Cascade mountains – an area that is “teeming with biodiversity,” says Patty Garvey-Darda, a wildlife biologist with the U.S. Forest Service. Over the course of a day, about 30,000 vehicles use the busy highway with even more during peak travel days. Wildlife crossings help eliminate a barrier that “prevents wildlife from moving between the north and south Cascades,” according to Glen Kalisz, wildlife biologist with WSDOT.

“It’s essentially a giant wall that nothing can cross,” said Kalisz. “A lot of times when you surpass that 10,000-vehicle-per-day threshold, animals stop attempting to cross the highway altogether. They can tell this is a losing battle.”

It also eliminates access to other breeding populations, resulting in a loss of genetic diversity that eventually impacts an animal’s ability to survive diseases and other environmental changes.

Since Phase 2 was completed, WSDOT has documented nearly 20,000 successful wildlife crossings in total with a variety of animals using them. Washington is also the first state to recognize that wildlife crossings are not just important to big game animals. The crossings, which are monitored by Central Washington University, have spotted large mammals like bears, deer, moose and elk using them and even smaller animals like coastal giant salamanders and western toads, according to Channel 5 News.

Currently, the project calls for another 15 medium and large wildlife crossings along with an additional overpass, according to Channel 5 News. The entire project is expected to be completed by 2030.