Washington gets elk ready for winter 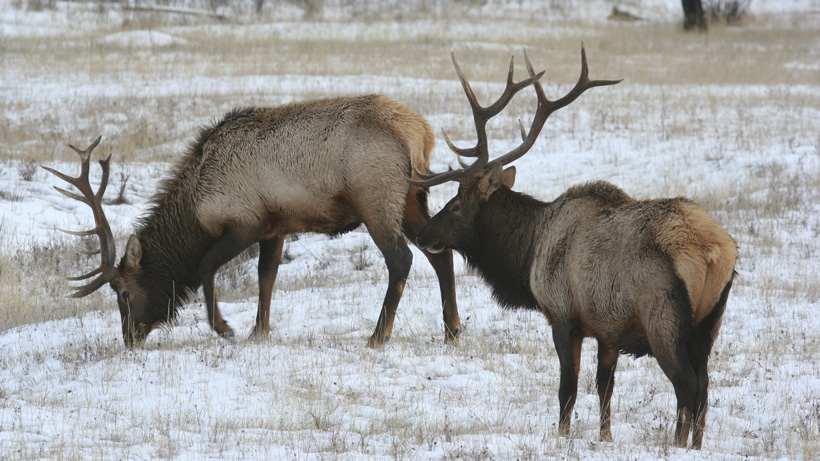 In anticipation of another cold and harsh winter, the Washington Department of Fish and Game (WDFG) is setting up supplemental feeding stations, gathering 2,500 tons of hay to feed at least 8,500 elk. Each elk eats roughly eight to 10 pounds of hay per day and Washington maintains seven feeding sites throughout the winter, the Yakima Herald-Republic reports. Oak Creek Feeding Station is one of the seven located west of Naches, Washington.

“We’ve already got quite a bit of hay delivered,” Oak Creek Wildlife Area manager Greg Mackey told the Yakima Herald-Republic. “I’m not sure that we have enough here to get us through the winter, but we’ve got about 120 tons of hay here.”

This specific feeding station is also a popular tourist destination for those interested in seeing hundreds of wild elk in one place. Yet, feeding this many elk at once requires a minimum of five employees to load and distribute the hay, repair equipment and fencing and count elk, according to the Yakima Herald-Republic. Volunteers have historically provided tours of the feeding area via two 2.5-ton trucks and staffed the visitors’ center.

With a prediction of winter weather similar to last year, WGFD expects to keep the supplemental feeding sites open as long as last year.  These sites open during early December and stay open through about the end of March. Fortunately, thanks to the surplus from the last two years, costs are not as high as they could be. This is a good thing because, according to Mackey, the volunteer program that assists the feeding operation was denied state funding, which could hinder some of the current operational protocol.

“I kind of was in panic mode,” says Mackey. “Being my first year here and then all of a sudden after 20 years of this successful volunteer program, they didn't get their grant funding.”

While Mackey says that the tourist viewing may experience some hiccups due to the lack of funding, the primary goal of the program will not. Elk will continue to receive supplemental feeding to stay healthy and out of agricultural areas.