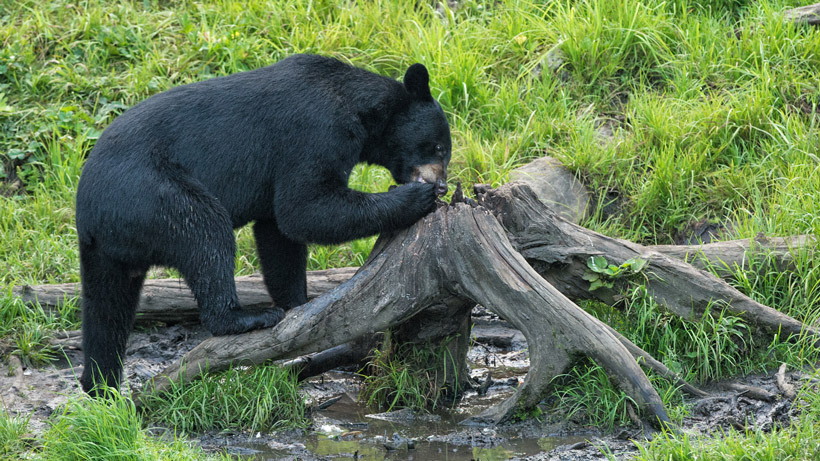 For the past 30 years, foresters in Washington State have used a supplemental feeding program to deter bears from peeling trees, which would greatly impact the industrial timber industry. When bears wake from hibernation, they often peel trees to snack on the sap beneath the tree bark, which serves as an energy boost when other food sources may not yet be readily available. By offering bears a specially formulated pellet, timber companies manage to keep tree damage to a minimal level; however, those who oppose the feeding program say it only shifts the problems to other areas and results in luring bears to their death.

According to the Washington Forest Protection Association, bears are responsible for millions of dollars in damage every year, KING 5 reports. The pellets are a special blend designed to nudge bears away from the trees, but also not interfere with their natural diet; the mix is carefully created to taste better than trees, but not the berries that bears seek out once spring is in full force.

“The idea is that when the bears start feeding on these pellets, that they leave the trees alone,” George Ziegltrum, who runs the Animal Damage Control Program for the WFPA, told KING 5.

The program does keep bears at bay, but many are still killed between April and June. Timber companies can obtain special permits from the Washington Department of Fish and Wildlife (WDFW) through the Bear Timber Depredation Management Program (BTDMP).  In fact, foresters can qualify for these special BTDMP permits if bears damage only one tree. While current tallies show about 100 bears killed annually for peeling trees, only five years ago roughly 200 were killed each year for tree damage.  These timber land hunts also fall within a loophole in Initiative 655, which passed in 1996 and bans the use of hounds and bait to hunt bears. According to KING 5, the loophole allows both of these practices and has been used over the last 21 years by timber companies to save trees from bears.

Bears seem to frequent Regions 5 and 6, where 90% of the damage occurs, resulting in bear hunts that remove 35% to 40% of the bears in those areas. Interestingly, WDFW does not include timber hunt harvests on its website where other harvest information is located, KING 5 reports. This is where opponents to the program feel it just creates different problems that conclude with bears eventually being killed anyway.

“If you’re baiting him in and he’s eating the feed, and he’s going down, coming back and eating the feed, why should he be punished for doing the right thing? I just don’t think it’s fair,” says a hound hunter who has helped timber companies kill problem bears (he asked KING 5 that his identity not be revealed). “They’re punishing the bear for doing the right thing.”

“The bears are very good at figuring out what is edible and what is not,” WDFW Game Division Manager Anis Aoude told KING 5. “They have evolved through eons of testing foods and eating them. So, if the food is not going to be nutritious for them they're not going to eat it. So, it’s not something we would have to regulate, unless it’s a poison and then we would see it. Unless it’s harming the bear, there really isn’t a need for us to be trying to figure out what’s in this feed."