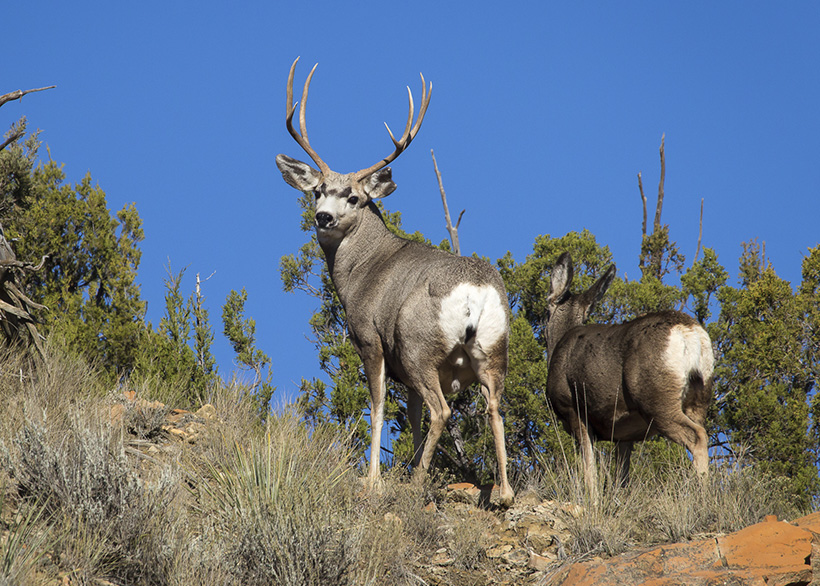 With the start of Utah’s most popular hunt — the general rifle buck deer hunt — just around the corner, biologists with the Division of Wildlife Resources have good news: in almost every area of the state, the number of buck deer will be similar to, or better, than it was last fall.

If you have a permit for the hunt, here’s an updated preview of what you can expect to find when you go afield:

Many of the units in this region consist of private land. If you have written permission from a landowner to access this land, then you will have plenty of bucks to hunt.

The largest public-land units in this region — Units 1 (Box Elder) and 2 (Cache) — the ratio of bucks per 100 does is lower. However, mild conditions last winter have allowed most deer to survive, so hunters will have options.

To locate deer, officials recommend scouting early in the evening and again early in the morning. Track the routes that the deer are using when they go to feed and when they return to the timber. Find a spot along the route that will allow you to intercept the deer.

If you have questions about hunting deer in this region, call the DWR's Northern Region office at 801-476-2740.

Since the archery season, this region has received a great deal of rain. The wetter conditions have caused the deer to disperse so they will be less concentrated around water sources.

In Unit 18 (Oquirrh-Stansbury), there are plenty of bucks available to pursue. After last fall’s hunts, biologists counted 20 bucks per 100 does in this unit. Some of this unit’s winter range was lost to wildfires this year.

In Unit 19A (West Desert, West), deer are not widespread on the unit, but every mountain range in the unit holds a few bucks. The Deep Creek mountain range holds the largest concentration of deer.

In Unit 19C (West Desert, Tintic), there are not many deer, but there are some big, mature bucks to be found. One of the best mountain ranges to hunt on in the unit is the Lake Mountain range west of Utah Lake. The East Tintic range near Eureka should also provide good hunting opportunity.

In Unit 16A (Central Mountains, Nebo), the buck-to-doe ratio is 21 bucks per 100 does, giving hunters plenty of opportunity to hunt.

In Unit 17A (Wasatch Mountains, West), hunters will arguably find the best opportunity. The unit received a great deal of rain this year and herds are thriving. If you have a permit for this unit, officials encourage you to purchase an elk-control permit as this unit also has a large population of elk.

If you have questions about hunting deer in this region, call the DWR's Central Region office at 801-491-5678.

Officials recommend that hunters scout before the hunt. After scouting, hunters should focus efforts on areas where they have seen bucks.

Weather could be a major factor during the rifle hunt. The temperature in this region has become significantly colder. Shrubs and forbs are drying out which means bucks will be forced to spend more time feeding in the open.

Officials suggest focusing on areas that have abundant browse species, such as sagebrush, bitterbrush, serviceberry, mahogany. First and last light are the most optimal times to hunt as that is when the deer are most likely to be on the move.

If snow comes early, the bucks will likely move from higher elevations to wintering areas in the mid and lower elevations. If this is the case, zones of vegetation, with aspen patches and sagebrush openings will be best for hunters. If the weather remains mild, bucks are likely to remain in the same areas they spent the summer in.

Hunting pressure is likely to push bucks into thicker cover or into areas that are farther from roads. Hunters looking for bigger bucks must cover land on foot and use optics to locate them.

Units 17B/17C (Wasatch Mountains, Avintaquin/Currant Creek) and 9A (South Slope/Yellowstone) have a great deal of elk on them. Officials encourage hunters to buy an elk-control permit so they can take a cow elk during the rifle buck deer hunt.

Thanks to a mild winter, the deer herds had higher than average survival rates. This likely resulted in more yearling bucks throughout the unit.

Deer in this unit will probably be at higher elevations that have good tree cover. If the temperature cools down, however, some deer are likely to move to lower elevations.

Southeastern Utah received a lot of rain throughout late summer, providing more nutritious forage for the deer. Water sources are also more available than they were a few weeks ago, meaning the deer are likely to be widely distributed across the ranges.

Given the changing conditions, hunters are unlikely to find deer in aspen tree stands. Rather, the deer are moving out of the aspen stands and into areas that have more cover.

If you have questions about hunting deer in southeastern or east-central Utah, call the DWR's Southeastern Region office at 435-613-3700.

According to DWR wildlife officials, there should be plenty of deer available to hunters during the rifle hunt.

Weather conditions in this region have been ideal in the past several years. The winters have been mild, allowing most deer to survive. Substantial rainfall has also provided deer with the vegetation they need in the summer.

In Unit 20 (Southwest Desert), Unit 29 (Zion) and Unit 30 (Pine Valley), deer are in the middle of migrating from higher to lower ranges, meaning herds are scattered. Rains have increased amount of good forage and water sources are abundant.

In Unit 21A (Fillmore, Oak Creek), Unit 21B (Fillmore, Pahvant) and Unit 22 (Beaver), summer rain has led to a wider dispersal of deer. To locate the deer, officials recommend looking over large areas of land early in the mornings and evenings, and sitting near water or shady trails during the day.

In Unit 23 (Monroe), hunters will have opportunity to find both young and mature bucks. Hunters that get into areas where access is difficult, and where there are fewer roads, will have a better chance of seeing the mature bucks.

The central and northern portions of the unit are the largest and contain the highest number of deer. The southern portion of the unit is narrow and fewer deer live there. To avoid trespass issues, hunters must be aware that there are some areas of private land, both at higher and lower elevations.

Deer are likely to be spread out from higher to lower elevations. Hunters should scout early or arrive before the hunt to find the elevation and areas the deer may be concentrated in.

In Unit 25A (Plateau, Fishlake), rifle hunters should expect to see good numbers of young bucks and an increase in the number of two- and three-year-old bucks. Rain has filled most water holes and deer probably will not be concentrated around water. If the unit continues to receive moisture, and temperatures fall, some deer may move to lower elevations.

In Unit 24 (Mt. Dutton) and Unit 28 (Panguitch Lake), hunters are encouraged to get out of their vehicles, glass and cover some country in order to find bucks.

In Unit 25B (Plateau, Thousand Lakes) and Unit 25C/26 (Plateau, Boulder/Kairparowits), officials recommend getting away from roads and all-terrain vehicle trails. As temperatures fall, deer tend to move out of summering areas and toward winter ranges. Bucks move later than does and fawns, meaning bucks may still be holding at higher elevations during the rifle hunt.

If you have questions about hunting deer in this region, call the DWR's Southern Region office at 435-865-6100.