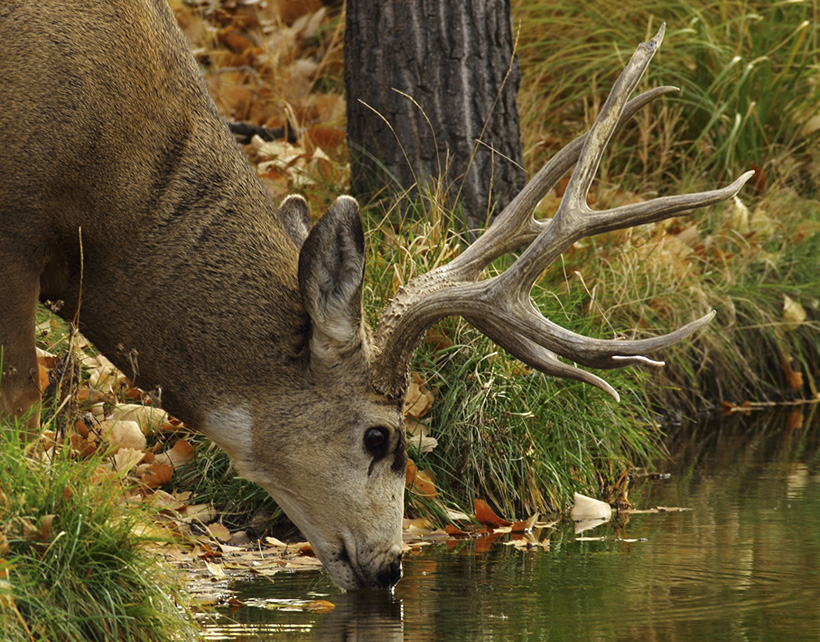 Utah’s Division of Wildlife officials have some good news for hunters with tags this fall — in almost every area of the state, the number of bucks is either akin to or better than it was last year.

Here’s a look at what deer hunters can expect across Utah for the 2014 fall hunting season:

The majority of northern Utah units are comprised of private land. If you can get written permission from the private landowner, then you will have a lot of opportunity this year.

The buck-to-doe ratio averages are much higher in Unit 7 (Kamas), around 22 bucks per 100 does.

While the total number of deer is still below target levels in most units across northern Utah, the mild winter allowed 90% of the fawns to survive in Unit 2. Many of the units in this region also received lots of rain this spring and summer. These factors will allow deer herds in northern Utah to grow.

Darren DeBloois, Regional Assistant Wildlife Manager with the Utah Division of Wildlife Resources (DWR) advises hunters to scout during the early evening, as the deer are leaving coverage to feed, and again in the early morning, as the deer return to their coverage after feeding throughout the night.

“Figure out the routes the deer are using,” DeBloois says, “and then find a spot along the routes that will allow you to intercept the deer as they move.”

DeBloois also says that because Unit 1 did not receive much rainfall this spring and summer the deer will be dispersed and more likely to be found at higher elevations.

“Finding water sources is the key to finding deer on Unit 1,” he advises.

West of the I-15, units 18, 19A and 19C, are very dry. Hunters are advised to look for stands of aspen trees, which typically indicate nearby water sources. Deer are more likely to be found in these areas.

On the eastern side of the region, units 16B, 16C and 17A, are more plentiful in water. DWR Regional Wildlife Manager, Covy Jones, recommends using binoculars to glass open hillsides at dawn. If you locate a deer, track the animal to see if it going to bed down for the day so that you can approach for a clean shot.

This region is well-suited for archery hunters this season. According to Randall Thacker, the regional assistant wildlife manager for the DWR, the ratio of bucks per 100 does is is improving throughout the region.

To locate and hunt deer on most of the units in this region, Thacker recommends finding water sources.

“With the exception of Unit 17B/17C, all of the units in the region are dry to extremely dry right now,” Thacker said earlier this month. “Finding water sources is the key to success. Find water, and you should find deer.”

Scouting before the season is also crucial.

“Little seeps and wet springs don’t show up on maps,” he says, “but they draw deer like a magnet. The best way to find these seeps and springs is to scout the area before the hunt starts.”

When it comes to finding an area to scout, Thacker suggests hunting in areas where you have had success in the past, or focusing on specific areas.

“If you’re new to deer hunting,” he says, “pick a canyon or two that look promising, and then focus on that area. Learn the spots the deer use and the travel routes they take. You’ll find more success learning an area thoroughly than you will jumping to a new area every year.”

The number of bucks has increased on units throughout this region so hunters can expect to find better archery buck deer this fall.

Crompton also points out that more yearling buck are expected to be available to hunters this season. And even though conditions throughout the region have been rather dry, recent showers have helped improve habitat quality for deer.

Late summer showers have helped improve the habitat throughout much of southwestern and south-central Utah.

Teresa Griffin, regional wildlife manager for the DWP, recommends hiking and glassing with binoculars to locate and track deer this season.

“The deer have plenty of water sources,” she says, “so they’ll be spread across the mountain.”

Units 21A and 21B (Fillmore, Pahvant and Filmore, Oak Creek) are two exceptions. These units are still dry and deer are more likely to be found near water sources.

For the last several years, weather conditions in this region have been ideal for deer so hunters should have an easier time finding deer.

“The winters have been mild,” she says, “which has allowed most of the deer to make it through the winter. We’ve also received good rainfall that’s provided the deer with the vegetation they need in the summer.”

Generally speaking, the ratio of bucks per 100 does, and the total population of deer in this region, seems to be trending upward. Units 22, 28, 29 and 30 look especially promising.

Griffin has received a number of healthy reports from hunters who have been out scouting over the past few weeks. Most of the bucks hunters are seeing are yearling deer and two-to-three-year-old deer, though “some of the hunters are also seeing some older, trophy-sized bucks,” she says. “I think this year’s archery hunt will be a good one. But I also think it will be a tough hunt. You’ll have to hike to find the deer.”