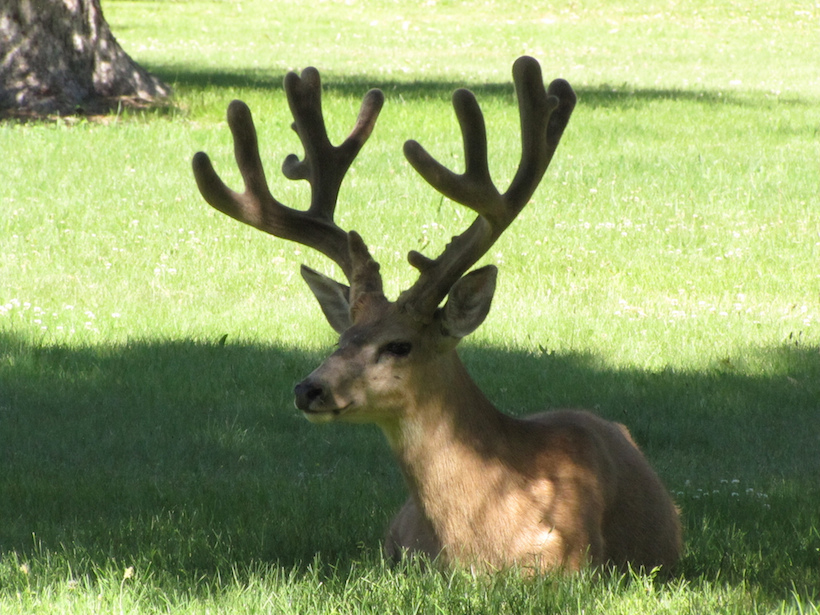 Last year, the Utah Division of Wildlife Resources approved a two-year pilot program for Highland, Utah that allowed a select group of expert archers to go out and hunt deer within the city limits. Highland implemented the program as part of the city’s efforts to control disruptive and destructive deer population.

Nearly ten years ago, harsh winter weather drove the mule deer down from the mountains to the urban sprawl of Highland,  which is about 30 miles south of Salt Lake City.  When spring returned, the deer decided to just stay in Highland. Since that winter, the deer population has steadily increased, creating major problems.

“They’re feeding on neighbors’ shrubs and gardens and destroying the gardens,” Highland Mayor Lynn Ritchie said. “And then we’ve noticed an increase in the number of deer that have been hit by automobiles on the busy highway. Timpanogos Highway goes right through the middle of our city, so that’s a major problem there.”

Jeannine Savage, a Highland resident, said that deer are a common site in her own backyard and welcomes the city’s idea of managing the population with an urban hunt.

“We had ten deer traipse through our yard last Christmas-time, and they were eating our bushes, which bothers me because we had just bought the bushes and planted them,” Savage said.

The archers are required to go through an extensive training and certification process. They are also required to adhere to a strict protocol during the hunt. According to the plan, the hunters must bait the deer with food to lure them into designated areas. They also must shoot from above, ideally using elevated tree stands, to avoid arrows traveling out of sight range.

“Hunters want a clean shot and the hunters do not want the deer to run more than fifty feet,” said Ritchie.

Hunters are also not permitted on private property without the owner’s approval. They can keep the deer by law. Or, if they don’t want it, the city will pay $40 to have the meat processed so it can be donated to a food bank. Because the archers work for free, the processing fees are essentially the only significant cost incurred by the city.

In total, archers harvested 60 urban deer last year. No bucks were taken, since the focus was on the does. The local homeless shelter benefitted as well, with 5,050 pounds of donated meat.

While Highland is the first city in Utah history to allow urban deer hunting, hundreds of other cities across the country have adopted urban bow hunts as well. And the list is growing, with communities from Minnesota to Arkansas to Utah holding them for the first time this year.

Helena, Montana is in dire need of an effective urban deer population plan. With an estimated deer population of 700 and climbing, Helena has the state’s worst urban deer problem. Montana Fish, Wildlife and Parks (FWP) staff, however, have not yet decided on the appropriate means of managing the population. 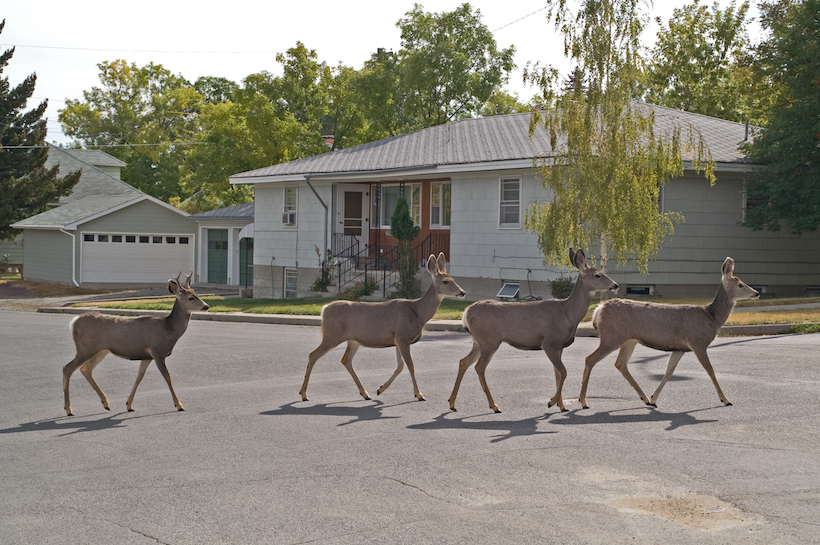 Three does and a small buck walking through the streets of Helena, Montana.
Photo Credit: Getty Images

“This is new territory for Montana,” Jeff Hagener, FWP director, told Montana Outdoors. “It’s something we haven’t had a lot of time to work out yet, because it hasn’t been a big deal until recently.”

While most deer live harmoniously with people, the challenges in Helena have been occurring more frequently as deer numbers continue to grow.

“All the deer in Helena aren’t out killing dogs and chasing kids across playgrounds. Most of the complaints we get have to do with deer droppings on the lawn and deer eating tulips. But if left unchecked, the real health and safety problems we now see will continue to increase, so it’s important to address deer numbers in Helena before the population grows even larger,” said Ken McDonald, chief of the FWP Wildlife Division.

Of course, not everyone supports urban deer hunting as the best means of urban population management. Many are concerned that it jeopardizes pet and human safety, supports inhumane and unnecessary killing and encourages trespassing. Those against it also believe it is ultimately waste of taxpayers’ money as the hunts may dent the deer population, but the numbers bounce back. It’s a losing battle.

As an alternative to urban hunting, some cities have implemented strategies like using repellants and high fencing or planting flowers and shrubs that don’t attract deer. These techniques, however, have not proven particularly effective.

The 2014 Highland urban hunting season will run from August 1 through October 31.