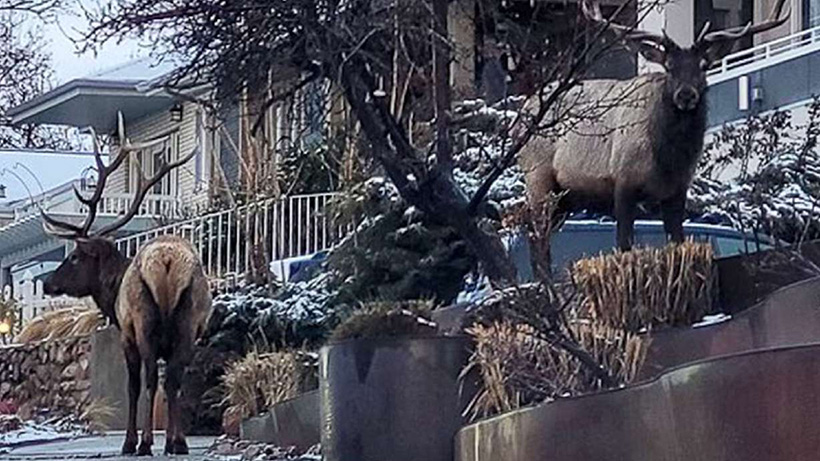 Two bull elk were relocated last week after taking the scenic route through Salt Lake City’s Yalecrest and East Bench neighborhoods in Utah. The elk were initially spotted by local residents on a Saturday and Sunday with a total of three different elk reported to state police, according to KSL News.

When Monday’s duo appeared to be roaming closer to the city’s center, state conservation officers moved in to tranquilize and relocate the animals. Utah Division of Wildlife Resources (UDWR) spokesman Scott Root said officers were able to tranquilize the two bulls in a Laird Avenue yard just about four blocks east of Liberty Park.

“We can’t have big mature bull elk roaming around in the city,” said Root. “At nighttime, you don't want to run into one of those with those antlers and big bodies. It's a very definite safety concern to have big animals like that roaming around.”

UDWR is still tracking the third elk in case they need to relocate it as well.

Freshly salted roads could have enticed the animals to move into the city. While deer are a typical site in the area, because elk tend to do better in heavy snow, elk sightings are considered fairly rare.

Root told KSL that the residents handled the incidents well, giving the elk as much room as needed, which is important because, as Wildlife Aware Utah advises, “they can move fast and cause a lot of damage.”

If someone spots the third elk – or another one altogether – please contact UDWR.

“We’re the experts. We're the ones who will be able to come and successfully ... relocate them,” said Root. “If you do have something like a moose or a big bull elk in town, give us a call and we'll respond.”