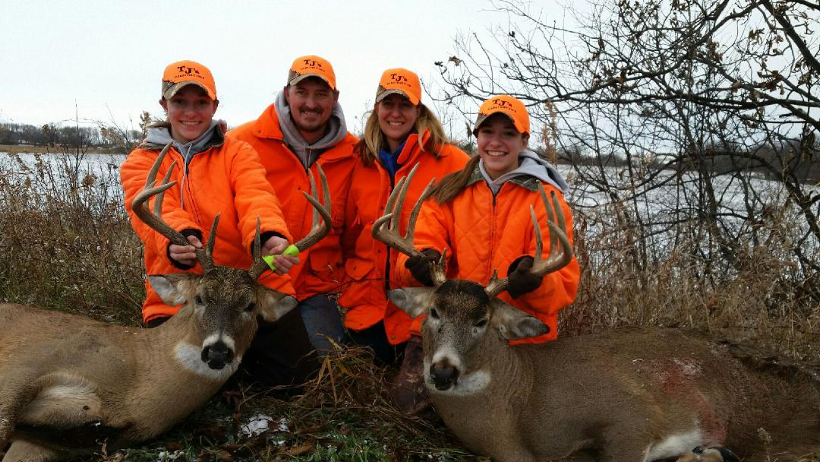 It was a lucky day for 16-year-old twins Cayley and Cassidy Vande Berg. The girls, raised as hunters and used to tree stand life since the early age of two, joined their parents, Chad and Tammy Vande Berg, on Wisconsin’s opening day of rifle season only to harvest “twin” bucks ten minutes apart. Cassidy, who hunted with her mom, shot her buck first with the help of her mom – an 11-point buck with an 11” spread. Cayley, who hunted with her dad, shot her buck minutes later – a 9-point buck with an equally impressive 17” spread.

“When you see a deer, it all happens so fast, especially if it is an older deer,” says Cayley, who shot her deer with a single shot from her brand new 30-06 rifle. “The older ones don’t stand still as long as the younger bucks do. I already had my gun out the window because I had seen two other deer right at opening. All of a sudden, this buck walked right out in the lane. That’s when I shot it.”

For Cassidy, the harvest was a team effort with her mom aiming the first shot and Cassidy shooting the second. The girls were ecstatic, obviously excited to share such an amazing hunt with each other as well as their parents. Tammy adds, “Some people told us the deer even looked like twins.”

Cassidy and Cayley field dressed the animals with just a bit of help from their dad and plan to have their trophy bucks mounted and displayed. Cassidy says that this isn’t the first time that the girls have harvested animals minutes apart – last year they did the same thing during turkey season.

This is a prime example of how hunting not only brings families together, but can create the types of memories that can be shared forever. Congratulations, Cayley and Cassidy!