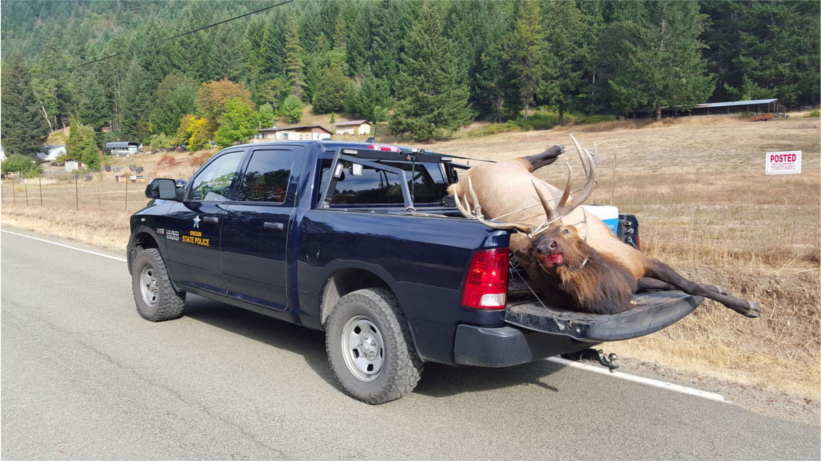 In a quiet neighborhood in southern Douglas County in Oregon, a bull elk was shot and left to rot in an open field only 70 yards from nearby houses early last Saturday morning. Residents who heard the shot reported the dead elk to authorities. The carcass was found only 50 yards off the road.

“It’s a shame, it’s a waste,” says Oregon State Police Fish and Wildlife Senior Trooper Aaron Baimbridge, who is leading the investigation. Baimbridge says that the elk meat was completely ruined, adding, “It’s not a hunter that is doing that. They’re just a poacher. It’s frustrating to see the waste of these beautiful animals. No one including legitimate hunters and non-hunters want to see this.”

According to The News-Review, this area has previously been impacted by multiple poaching incidents, with eight bulls shot and left to rot in 2007 and 2008. Despite a $17,500 reward, whoever was responsible for those crimes was never caught and, now, because the statute of limitations has passed, wouldn’t be convicted.

Saturday’s incident has many residents concerned.

“I don’t think most of the people in Glendale are too fond of the poaching and that sort of thing,” says Adam Jones, the town’s mayor. “We’re a very, very remote town. We’re a city in the wilderness. Most people live here because they love the outdoors, but they don’t love this sort of thing. We hope to see this stopped.”

Currently, the Oregon Hunters Association Turn-In-Poachers program is offering a $500 reward for information leading to the arrest of the responsible party. Baimbridge hopes that someone comes forward. If you have any tips to report, you can contact Baimbridge anonymously through the TIP hotline at 800-452-7888 or by email.

No one should be able to get away with a crime against wildlife as wasteful as this.