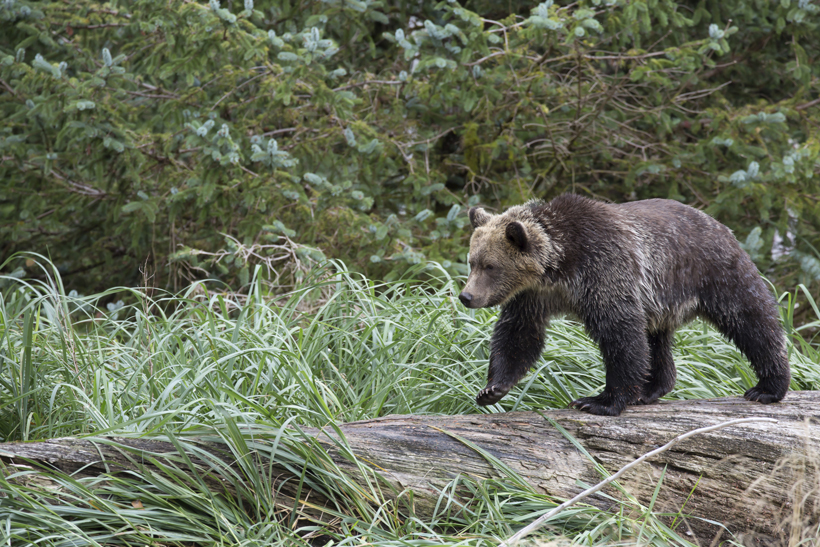 Eight grizzly bears were trapped and tagged last summer in an ongoing effort to understand more about their behavior, and particularly, their behavior around hunters.

First, experts want to learn more about if and how the density of grizzly bears changes over time in relation to the hunting season. That is, do rifle shots signal food to bears which in turn congregates bears? To find out, the experts have set up hair snares that collect bear DNA. Cameras at the snare sites enable the scientists to match the hair with specific bears caught on film.

The scientists will also track exactly when and where the elk are killed and how this impacts grizzly behavior.

“We want to know on a daily basis where the gut piles are,” said Mike Ebinger, who is leading a study for the IGBST. “We’re not interested in the elk gut piles, but in how the grizzly bears respond to them. They can be a very attractive resource.”

The study will also seek to shed light on how hunters and grizzly bears interact. To begin the study, last summer the team trapped and fitted eight grizzly bears with GPS collars. Scientists will use the data collected from the GPS collars and compare it to the positioning of the elk hunters.

To track the elk hunters, the study team has asked them to voluntarily carry and return 100 GPS units that can track their movements. After a day’s use, the units can be returned, their data downloaded, and the GPS recharged and sent out again. To encourage participation, hunters cooperating will be entered in a raffle.

Ebinger showed slides demonstrating just how the data from the GPS devices could be combined. In one case, a group of hunters left a parking lot around 6 a.m., turning on their GPS units. As they moved around a lake, tracing an elk, a nearby GPS-collared grizzly bear began to move in the same direction either behind or to the side of the hunters. Ebinger believes the bear was downwind in order to trace the hunters’ scent. At one point, the bear was within 100 yards of the hunters who were completely unaware of its presence.

The bear bedded down around noon, but resumed its path right after, picking up the hunters’ now-cold trail and following them again. Scientists believe that the bear was hoping the hunters would shoot an elk.

Though the hunters’ trail was hours old, the bear would have no problem picking up the scent and tracking their path. Some estimates place a grizzly’s sense of smell as seven times better than a bloodhound’s. Studies have calculated the size of a bear’s scent-detecting area as 100 times larger than that of a human’s. Grizzly bears also have a Jacobson’s organ in the roof of their mouth that can decipher heave moisture-borne scents.

As the number of grizzly bears continues to increase, and bear-hunter interactions become more frequent, understanding the behavioral patterns of the bears in relation to man is crucial.

Hunters and bears often collide in the fall because of a common interest in eating fresh, wild protein. Fall hunting season brings a number of individuals into the woods hoping to move stealthy and sneak up on deer and elk. At the same time, the grizzlies are in “hyperphagia”, which is the stage before they enter hibernation. During this time, the grizzlies are consuming as many calories as possible to gain fat for their long slumber. Gut piles and carcasses left by hunters provide an easy source of food. Given these facts, it’s only natural that man and bear will collide.

“As Mike indicated in his presentation, these movements show that ungulate carcasses tend to keep bears close to the area,” Fran van Manen of the IGBST pointed out. “With GPS data from other bears we can start investigating these type of interactions.”

The team hopes that their findings will help lessen the changes of human-bear interactions.

Ebinger stressed that the study is not meant to revise hunting regulations in places like Grand Teton National Park. The work, however, should be easily translatable and applie to other areas where hunters and grizzlies are likely to collide.