Too many grizzly bear viewers prompt changes along U.S. Highway 26 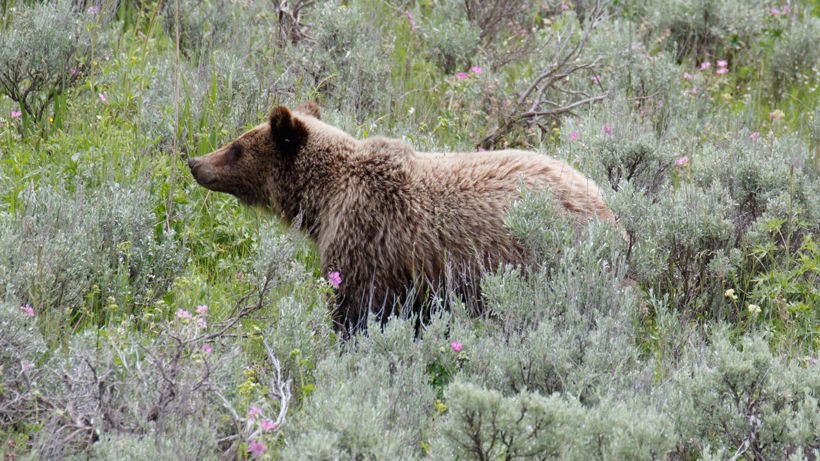 You can spot grizzly bears along U.S. Highway 26 near Togwotee Pass between Dubois and Moran Junction, Wyoming, but too many people are stopping, resulting a multi-agency effort to change grizzly bear management to keep both the people and wildlife safe. Historically, only a few handfuls of people have stopped to view the grizzlies; however, recent numbers have surged and the Wyoming Highway Patrol (WHP), Wyoming Game and Fish Department (WGFD), Teton County Sherriff’s Office and the U.S. Forest Service are trying to curb the influx of grizzly bear viewers, Buckrail reports.

“What started as just a handful of people occasionally watching a sow grizzly bear and her cubs has now turned into large crowds of people getting out of their illegally parked vehicles, creating a serious safety issue along this busy highway due to vehicles traveling at a high rate of speed as they pass by,” said WHP Lieutenant Matt Brackin.

“This is not like a national park where motorists are traveling at much lower speeds and expecting to see wildlife with the public pulled over to wildlife watch. This is a major highway with numerous large semi-tractor trailers that can’t stop in short order to avoid stopped vehicles or excited pedestrians that are crisscrossing the road. It has become a significant safety issue.”

First off, Wyoming state troopers will cite anyone who has illegally parked on the actual highway to view bears rather than the designated parking pull-out, according to Buckrail. WGFD officials will also start to haze sows and cub to keep them away from the highway.

“Hazing wildlife away from busy highways and other areas of human development is a commonly-used practice to prevent a wildlife-vehicle collision or a dangerous encounter between people and wildlife,” said Dan Thompson, WGFD large carnivore supervisor. “As an agency, we promote safe and ethical viewing of wildlife, but unfortunately this has escalated into a situation that is not safe for people or the grizzly bears. Bears occasionally seen from a road are much different than bears that frequent these areas and become habituated to people. When allowed to persist, it only increases the likelihood for either people or bears to behave poorly, which can result in a human injury or death, or the grizzly bear having to be euthanized.”

Basically, the agencies ask that the public keep their safety and the safety of the grizzly bears in mind should they decide to stop and watch.

“The efforts to recover our grizzly bear populations have afforded people unprecedented opportunity to see and photograph bears on a regular basis in northwest Wyoming,” said Thompson. “But with that comes the responsibility to do it safely and ethically for the benefit of both grizzly bears and people.”