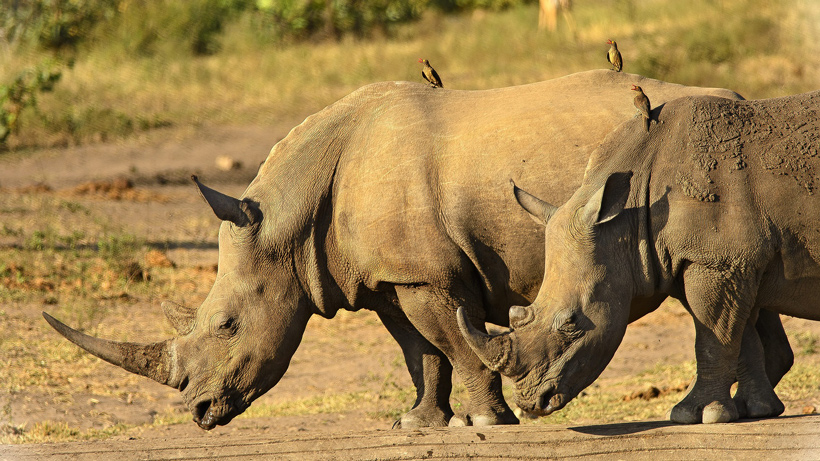 Training dogs to track bobcats, mountain lions and coyotes is something that Joe Braman does well. The Texas-based rancher and businessman have been honing his skills for years, training coonhounds to recover and hunt for these animals within the Lone Star State. Yet, a recent trip to South Africa changed his focus and now he’s training his dogs to hunt a different sort of animal: South African poachers.

Last February, Braman traveled to South Africa and saw firsthand the level of destruction and devastation poachers have inflicted upon the dwindling rhinoceros populations. He came across one of the massive gray animals during his trip without its trademark horns and barely breathing, the Victoria Advocate reports.

“Since then, there's not a day that I don't wake up thinking about those rhinos,” said Braman, who turned his dog training focus to his new cause: tracking the poachers behind this wildlife destruction. With the help of retired K-9 handler and trainer Esequiel “Zeke” Ortiz, Braman has already trained 50 dogs for the cause and has partnered with the Ivan Carter Wildlife Conservation Alliance to transport his trained dogs back to South Africa to catch poachers.

“With rhino horn becoming the most valuable commodity on Earth and rhinos having been poached to the brink of extinction, this is a topic of much conversation,” Ivan Carter, founder of the Alliance, told the Victoria Advocate in an email.

On March 20, the last male northern white rhinoceros died at the Ol Pejeta Conservancy in Kenya and, according to National Geographic, rare black rhinoceros are nearly extinct. In a 2016 investigation, National Geographic brought to light the illegal wildlife market where rhinoceros horns are valued at nearly $3,000 per pound and used in Chinese medicine and crafts. Poachers target rhinoceros for their horns and extract them in a non-renewable way. Because the horns are made of keratin, if they were shaved down, the animals would be able to re-grow them. Unfortunately, according to the Victoria Advocate, horns are often removed in such a way that the animal never recovers. While there are currently over 29,000 rhinoceros still living, prior to the 19th century – and the increase in poaching – there were hundreds of thousands, National Geographic reports.

“The ability for free-running dogs to track a poacher (whose scent is) that many hours old is a capacity we have never done before — this truly is the answer, and the fact that these dogs have been trained not only to track man but to actually (allow officials to) arrest a person makes them a unique tool that I think has the chance of changing the entire poaching landscape,” said Carter.

Since returning from his trip, training the dogs for this task has become Braman’s main focus. With Ortiz’s help, they create multiple tracking scenarios for the dogs on Braman’s Refugio County, Texas ranch, working with the dogs day and night for months. This summer, the dogs will travel to South Africa and report for duty. Braman is hopeful that once there, rhino poaching will begin to drop.

“These hounds mean business. They will find you. Guaranteed,” said Braman.