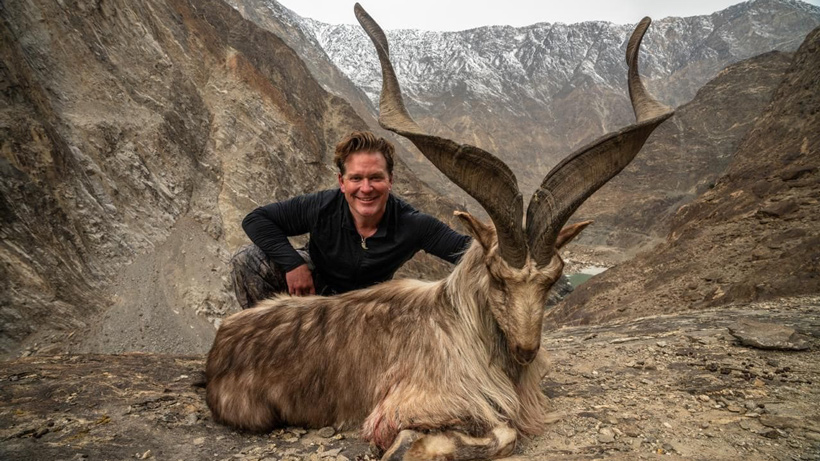 When a hunter pays a lot of money to hunt a rare species on foreign soil, global fury usually follows. This is due to the fact that too many focus on the dead animal—in this case, a wild Astor markhor (a rare Pakistani mountain goat)—and neglect to see the bigger picture where the money paid for the exclusive permit goes into the (often poor) local economy and funds conservation initiatives.

Bryan Kinsel Harlan is the latest hunter to pay a lot of money to take a rare animal. According to Fox News, Harlan, who is the founding partner of Benchmark Mortgage, paid $110,000 to harvest the wild Astor markhor as part of the country’s conservation program. $110,000 USD equals $15,387,780.94 Pakistani Rupee, which is considered “a record-breaking sum in the country.”

“What has happened in this Astor markhor hunt is a prime example of what happens when a hunter and a village come together with a common understanding of conservation. And as that happens, it reduces the poaching and – something that is often overlooked – the amount of wages that are brought to that hunt, the amount of food, and the amount of foreign investment,” said Harlan.

However, some say this type of hunt should be outlawed, especially when it’s rare animals like the wild Astor markhor. Yet, Pakistani officials and other conservation groups say that these types of hunts have “actually helped save a rare and endangered species from potential extinction” and, since they started allowing foreigners to hunt 12 male goats every season in specific areas, the markhor population has actually increased, according to the Washington Post. In fact, the once endangered species has recently been reclassified as “near-threatened.”

Tabarak Ullah, who guided Harlan during the hunt, told the Washington Post that “the presence of foreigners brought only positives to the country.”

“This is not just about hunting,” said Ullah. “The number of animals is increasing, and these foreign hunters are millionaires who go back and tell the world that Pakistan is safe.”