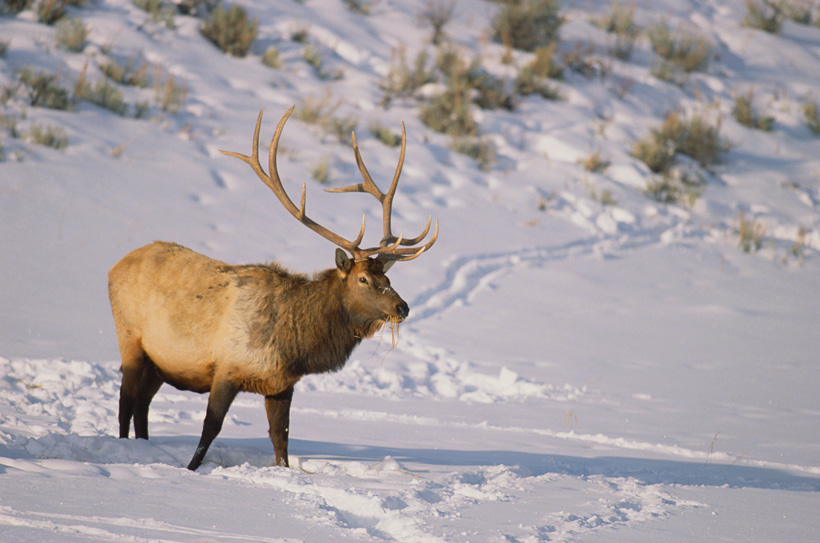 Two nature photographers have filed a lawsuit against the government in an effort to stop the annual elk hunt in Grand Teton National Park.

Nelson describes himself as a professional photographer, Mayo as an enthusiast.

They argue that in May 2014, the National Park Service approved the harvest of 300 elk without properly determining if the animal’s numbers have rebounded enough to warrant another hunt.

“In making its decision to approve the hunt this year, as in years past, NPS did not issue any finding allowing the hunt — at the same level approved in prior years — was in fact necessary for the proper management and protection of the elk as required by the Grand Teton Act,” the claim states.

Mayo and Nelson’s challenge also incorporates the practice of supplemental feeding at the National Elk Refuge. Under the 2007 Bison and Elk Management Plan, refuge officials had attempted to reduce the number of elk on supplemental feed to 5,000.

However, “the number of elk being fed with supplemental feeding in the Elk Refuge has increased from 7,279 elk in 2007, when the Management Plan was adopted, to 8,300 elk in 2014,” the suit says. “The FWS is not in fact in the process of phasing out the supplemental feeding of elk … despite the fact that the FWS is now already in year 7 of the 15-year Plan during which the phase-out is supposed to be accomplished.”

The claim maintains that the supplemental feeding program also artificially increases the number of elk that would otherwise be in the area, which in turn, justifies the Elk Reduction Program. If numbers are the primary concern, then “eliminating winter feeding on the refuge would negate the need for hunting elk,” in the park.

Mayo, whose father once worked for the NPS, moved to Jackson, Wyoming nearly 50 years ago and has since been an avid photographer of elk and grizzly bears.

He also notes in the lawsuit that “the noise from the gunshots and the commotion cause by the hunt participants scares the elk and much of the other wildlife [he] wishes to photograph…Rather than observing the Jackson elk in their natural splendor and engaging in natural behavior, Mr. Mayo has, instead, all too often witnessed these animals curelly and senselessly wounded by ERP participants shooting wildly into the herds.”

Mayo also says he does not appreciate running into “gut piles” either and that on one occasion, while taking photographs, he was almost shot by a careless hunter.

The claim adds: “It is also hazardous for Mr. Mayo to drive through the Park during hunting season because, although there are technically setback limits in place prohibiting shooting within a certain distance of roads, these limits are regularly disregarded by ERP hunters.”

Mayo claims that some of the collateral damage includes the 2012 killing of an adult male grizzly bear, which is a threatened species under the Endangered Species Act.

The “incidental take” of the grizzly bear put Grand Teton at the limit of anticipated grizzly deaths due to the hunt. Just one more and the hunt would have violated the Endangered Species Act.

To help prevent that from happening, the park closed eight miles of wooded Snake River bottomlands and required hunters to carry bear spray. In the meantime, Fish and Wildlife increased the number of bears it predicts hunters will kill in a 15-year time span (2007-2022) from just one to five grizzlies.

“The FWS provided no explanation as to how it derived these “take” figures, which dramatically increased the permitted take of threatened grizzly bears,” the suit states. “The FWS did not impose any new binding measures on the NPS to ensure that these new take figures would not be exceeded, and the FWS also did not impose any new reasonable and prudent measures or terms and conditions with which NPS must comply.”

The suit also claims that Fish and Wildlife did not adequately examine the disruption to the bears’ habitat caused by hunters leaving gut piles behind in the park.

In the end, Mayo and Nelson allege violations of the Grand Teton Act, the National Park Organic Act, the Endangered Species Act and the National Environmental Policy Act. They are seeking a court order preventing the NPS and the FWS from approving any more hunts until they have “fully complied with all of their obligations” under the acts.

While Grand Teton park officials have not commented on the lawsuit specifically, they have been very vocal about how and why the elk reduction program is authorized each year.

First of all, the hunt ensures that the Jackson Elk Herd remains within population objectives. The Wyoming Game and Fish objective for the herd stands at 11,000 while biologists estimated 11,6000 in the last annual winter census.

The elk reduction hunt also helps to ensure the elk remain evenly distributed across four summer ranges. Without the hunt, an increasing number of the elk would move to Grand Teton, overwhelming habitat there as they abandon other areas.

“That’s not desirable ecologically or for any other reason,” remarked Grand Teton Senior Wildlife Biologist Steve Cain. Stopping the hunt would “greatly affect recreational hunting and the ability to manage the herd outside the park.”

What’s more, the officials point out, is that Grand Teton has made significant strides toward reducing the hunt.

“We’ve had successful recovery of the grizzly bear and wolf,” Cain said. “Natural regulation is playing a much larger part in the park than it did in the last 50 to 60 years.”

That is part of the reason that only 650 park hunting permits have been made available this year as opposed to the 3,000 that have been offered in the past. The hunt is now what Cain refers to as a “maintenance state.”

In regards to the grizzly bears, Cain points out that it is necessary to understand that grizzlies have expanded their range, making the Fish and Wildlife increase from its 2007 “incidental take” number necessary. “There has been measurable, considerable change in grizzly bear activity and presence in the south end of the park since 2007,” he added.

Safari Club International (SCI) is currently investigating whether or not to intervene in the case to defend the hunt. SCI maintains that hunting on the refuge is an important sustainable-use tool that the federal government uses to manage the elk herd.

In order to become involved in the case, SCI requires assistance from members that have hunted elk in Grand Teton previously and/or plan to do so in the future.  If you are willing to provide a written statement that will be submitted to the court, you are asked to contact Anna Seidman, SCI Director of Litigation, at aseidman@safariclub.org.