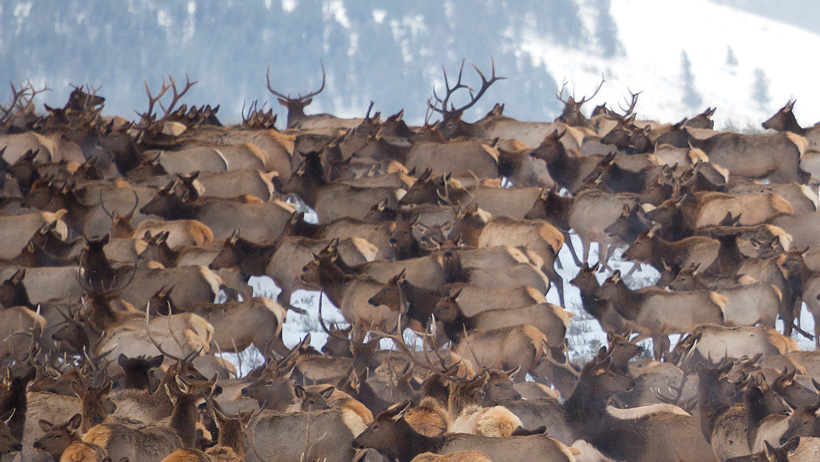 The future of the elk feeding grounds in western Wyoming is now in question, once again. With two lawsuits filed against four different feeding grounds, thousands of elk may have to find new areas to winter. The first suit, if ruled in favor of closing feedgrounds, would set forth a plan to phase out supplemental feeding on the National Elk Refuge outside Jackson Hole. This elk refuge is home to upwards of 7,000 elk each winter — elk that rely upon supplemental feeding to survive harsh winters and closing the feedgrounds will affect 20% of Wyoming's state elk herds. The second suit calls for the renewal of necessary permits on Alkali, Dell Creek and Forest Park feedgrounds to be blocked.

The argument for ending the feedground system can be traced back as far as wildlife has been interacting with livestock in Wyoming and other western states with similar programs. It is no secret that animals in large populations in close proximity to one another tend to have an increased prevalence of disease compared to animals that live within smaller populations. One of the biggest diseases to ravish the livestock community that can be traced back to wildlife is brucellosis. Now, the worry has shifted towards the growing threat of chronic wasting disease (CWD), which can be found across eastern Wyoming elk, mule deer and whitetail herds. CWD has also been detected within the western parts of the state.

With the number of elk statewide on a decline due to increased predation, disease, wildfires and habitat loss, the idea of a proposition that will immediately and surely kill more elk than save is difficult for sportsmen and women to get behind. Traditionally, there has been about a 50/50 split between those favoring ending feedgrounds and those favoring the continuation of them. Historically, these feedgrounds served as a means of separating livestock from wildlife and used as a protection measure for ranchers to safeguard their animals and haystacks throughout the winter. Those same reasons exist today, and, subsequently, the correct solution is not apparent. With 22 feedgrounds spread across the western part of the state supporting tens of thousands of elk each winter, the future of elk and elk hunting hangs in the crosshairs.

The situation will continue to be monitored and reported upon by goHUNT as it develops.

Check out the short video below to learn more information