Spotted: A wolf in the Grand Canyon 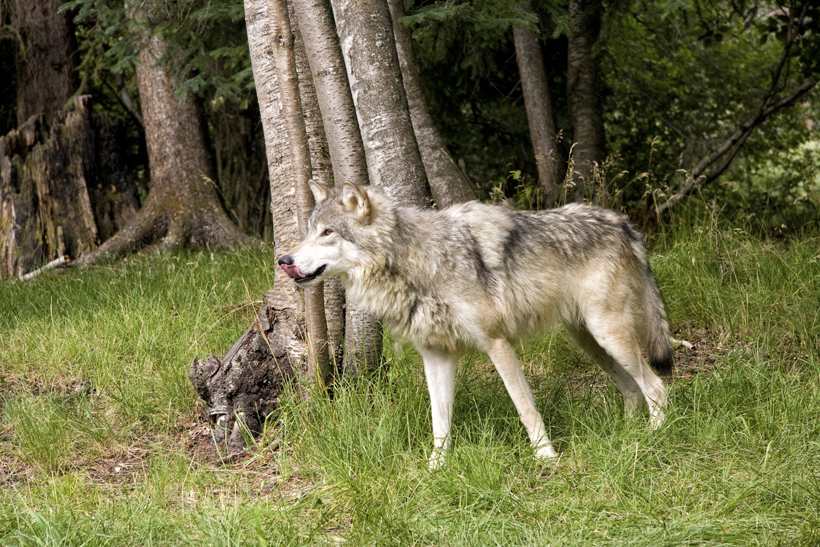 The quest is on to identify an animal resembling a gray wolf that has been spotted multiple times recently near the Grand Canyon’s North Rim.

If the animal does turn out to be a gray wolf, as many wildlife experts suspect it is, the sightings would mark the first time a gray wolf has been seen in the Grand Canyon area in nearly 70 years.

Over-hunting nearly drove the predator to extinction in the United States, where it had roamed across much of the country for centuries.

Grand Canyon Superintendent Dave Uberuaga says that the park has received multiple reports of the animal, which has been both seen and photographed in Kaibab Plateau in recent weeks, just north of Grand Canyon National Parks. The animal is said to be wearing a collar similar to those worn by wolves that are part of a recovery effort in the Northern Rockies.

Agency spokesman Jeff Humphrey says the animal could potentially be from that population of about 1,700 wolves. There has also been some speculation that the animal could be a wolf-dog hybrid or a Mexican wolf.

A group of less than 100 endangered Mexican gray wolves lives in portions of eastern Arizona and western New Mexico. Based off the photographs, however, the mystery animal does not appear to be a Mexican wolf. Wolves in the Northern Rockies have fuller bodies and less pointed ears than Mexican gray wolves.

Yet the only way to definitively identify the animal is to analyze its fecal matter, which the agency is doing right now.

Until the analysis is complete, the government is asking the public to treat the animal as if it is a gray wolf from the North Rocky Mountains, which is an endangered animal with federal protection.

"Our immediate concern is the welfare of this animal," Humphrey said.

Gray wolves are known for traveling vast distances in search of food and mates. Packs from the Northern Rockies have been found as far south as Wyoming.

Given the attention that the Fish and Wildlife Service is giving the case, National Geographic Young Explorer Jay Simpson, suspects that the mystery creature is in fact a gray wolf.

Environmentalists said the confirmed presence of a gray wolf around the Grand Canyon would be exciting, but they remain concerned about the possibility of removing them from a list of protected species.

"There's an increasing number of people who have learned about the pivotal role wolves play in natural ecosystems, know they have been persecuted relentlessly over decades and cheer the return of wolves," explained Michael Robinson of the Center for Biological Diversity. "And there are people who are fearful, concerned and opposed.”