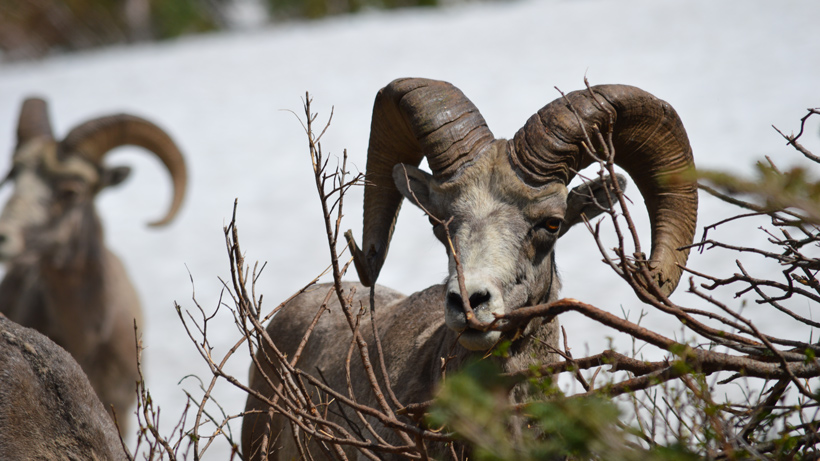 Pneumonia, cliff falls, vehicle collisions. South Dakota’s Deadwood bighorn sheep herd has had a string of bad luck since 2016, including one ewe that starved to death after getting her head stuck under a log, according to Trenton Hafley, Regional Terrestrial Resources Supervisor for South Dakota Game, Fish and Parks (SDGFP). It’s been only four years since bighorn sheep were relocated to the northern Black Hills and, while mortality has been high, wildlife officials hope that by “removing a few troublesome individuals…they can return the herd to health,” the Rapid City Journal reports.

According to the latest SDGFP tally, the Deadwood herd is only 17 bighorn sheep strong. Of the original 26 that were relocated to the area in 2015, 25 have already died. And the rest of the herd is only one-to-two years old.

Pneumonia is behind most of the deaths. Thomas Besser, a bighorn sheep researcher at the Washington State University College of Veterinary Medicine, told the Rapid City Journal that the outbreak was started by a single member of the herd that then passed along the disease to the others.

“In most outbreaks, only a single animal contacts the source of the bacteria [domestic sheep] and gets infected,” said Besser. “From then on, it’s all wild sheep to wild sheep.”

It’s not a single Black Hill herd being affected. According to Hafley, the Rapid City herd and Custer State Park’s herd have also seen dramatic declines in population due to pneumonia; however, other herds in Jewel Cave National Monument, Badlands National Park and Elk Mountain remain unaffected. Right now, SDGFP is focusing on removing diseased sheep from the Rapid City herd. Next, eliminating sick animals in the Deadwood herd will be their focus.

“I’m 100 percent confident that in the next couple years, we'll be able to clean up this pneumonia outbreak,” said Hafley. “We’re working in Rapid City right now to get this thing cleaned up, and I expect that Deadwood will go just as well.”