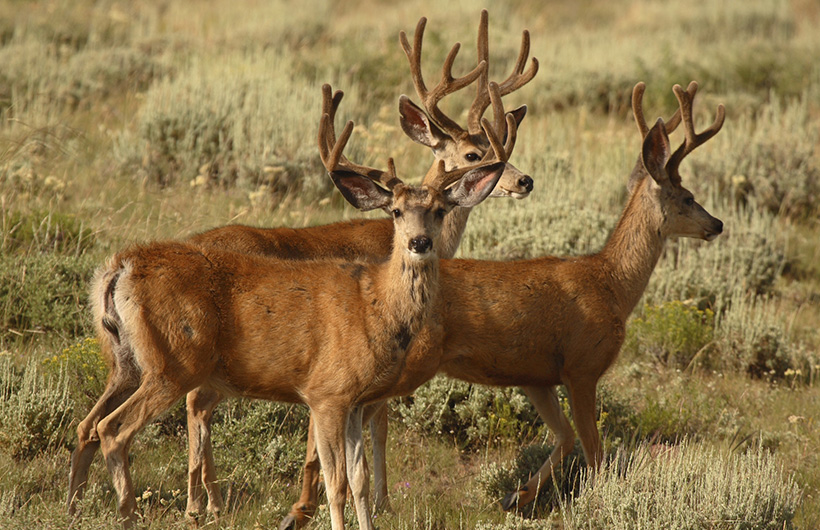 In a collaborative effort between the Wyoming Game and Fish Department and Nebraska Game and Parks, an ongoing mule deer poaching case has been resolved. Four Nebraska men have pleaded guilty to several poaching violations, resulting in more than $17,500 in fines and restitution.

Last November, wildlife authorities began receiving reports from local residents that hunters were illegally taking mule deer in eastern Wyoming while the season was closed. Wyoming game warden Brady Vandeberg and Nebraska conservation officer immediately initiated surveillance on the area to assess the situation. What they discovered was a bevy of poaching violations involving four individuals.

Art Smith, 64, of Nebraska, was found guilty of trespassing and hunting on private land, illegally baiting big game and intentionally taking antlered big game out of season. Smith was sentenced to probation until June of 2016, received more than $10,000 in fines, and was ordered to pay $4,000 in restitution. He was also hit with a 120-day jail sentence, which was suspended, and had his hunting, fishing and trapping privileges in Wyoming revoked for life. Charges of taking big game from a vehicle and with artificial light were dismissed as part of his plea deal.

Zachary Smith, 32, of Nebraska, was found guilty of hunting on private land without permission, illegally baiting big game and illegally taking big game from a vehicle. He received four years probation, was fined $1,500 and will lose his hunting, fishing and trapping privileges for two years. Zachary also received a 60-day jail sentence, which was suspended. Charges of taking big game with artificial light, taking big game after hours and intentionally taking antlered big game out of season were dismissed as part of his plea deal.

Ryan Knutson, 41, of Nebraska, and Dave Knutson, 65, of Nebraska, were also found guilty of hunting on private land without permission and taking big game without a license.

“Poachers like these are taking hunting opportunities away from law-abiding hunters and negatively impacting the wildlife resources,” Vandeberg stated. “Nebraska has mule deer hunting seasons in November, while Wyoming closes the mule deer hunting season on October 15 to protect mule deer during their most vulnerable time, the rut. These poachers clearly had no regard for the law or wildlife.”

Thanks to diligent efforts by officials at both Wyoming Game and Fish and Nebraska Game and Parks, however, these men have been brought to justice.

The Wyoming Game and Fish Department Wildlife Forensics Laboratory, Wyoming State Veterinary Laboratory and Wyoming State Crime Lab also played pivotal roles in analyzing evidence. The case against the four Nebraska men was so strong that it left them no choice but to enter into a plea agreement.

“We understand that, sometimes, people might be confused about hunting seasons or hunt area boundaries, but all they need to do is ask and we are glad to help. By their statements, these men clearly knew they were in Wyoming and that mule deer hunting season was closed. This pattern of behavior was not only illegal, but also unethical. These were possibly the worst ethical violations I have seen in my career. These poachers showed total disregard for private landowners and Wyoming’s wildlife,” Vandenberg concluded.

In the state of Wyoming, officials can charge individuals with a felony if they have been convicted of poaching three times within a 10-year period. A first-time offender can be charged with a misdemeanor, which carries up to one year in jail, no more than $10,000 in fines, the loss of hunting and fishing privileges and forfeiture of anything used during the crime.