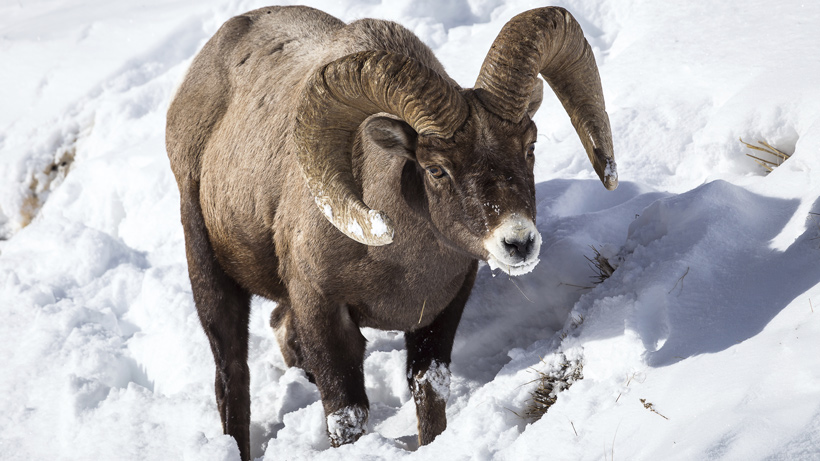 With an elevation over 13,000’, the Teton Range is home to one of the country’s rarest bighorn sheep herds. It’s an iconic herd that biologists believe has been around since the Ice Age. These animals live high within the Teton Range, eating dried grass and leftover lichen and make a home among the high winds and negative 40-degree temperatures.

“They represent a population that has been there since the last Ice Age,” Biologist Michael Whitfield told the Casper Star Tribune. “They have been isolated and genetically inbred to a degree, but they still represent a success in that they’ve been able to hang on in a very tough environment.”

According to the Casper Star Tribune, Whitfield was the first biologist to prove the Teton Range bighorn herd still existed after the U.S. Forest Service and other agencies “declared them extinct.” When the herd was rediscovered, it was small, ranging between 125 and 150—a low population that worried biologists then. Now, with the population half that size, this rare herd faces possible catastrophe as their winter range shrinks, non-native mountain goats threaten their health and compete for food, and backcountry skiers encroach on their territory.

While bighorn sheep are found throughout the West, the Teton Range herd is unique. According to Aly Courtemanch, a wildlife biologist with the Wyoming Game and Fish Department, “the Teton herd is one of the oddest” because it was never lost and then restored; the herd also doesn’t migrate.

“We’ve seen a decline, and I think the concerns we have now have always been concerns to some extent that at some point this population will trend towards blinking out unless we address some of these issues,” says Courtemanch. “Whether that’s in the next few years or the next few decades, having a small population of sheep in there is concerning.”

With the acknowledged threat to the Teton Range herd, figuring out how to save them will be a collaborative project. Prescribed burns to boost habitat, hunting, trapping or relocating mountain goats, and seasonal closures have been discussed, but nothing specific has been decided.

“We’re trying to do the reverse of the typical bureaucratic approach here where an agency issues a statement and recommendations,” Steve Kilpatrick, executive director of the Wyoming Wild Sheep Foundation, told the Casper Star Tribune. “We want to have a community-based recommendation addressing how valuable this herd is to the community.”