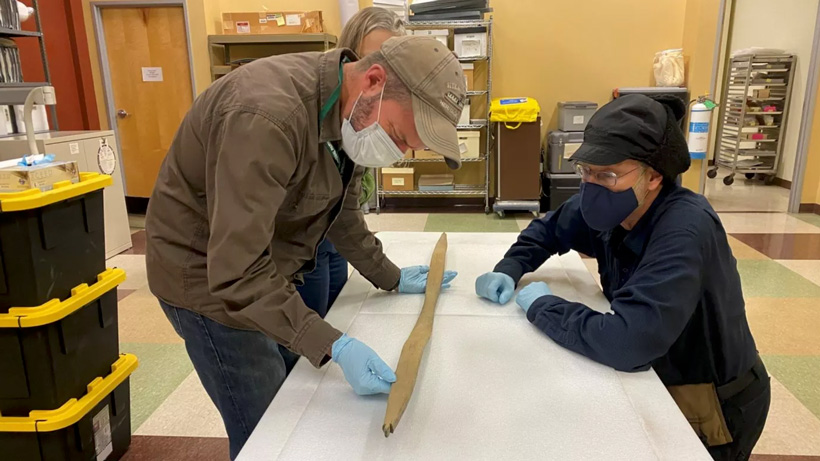 Deep within the Alaskan permafrost, a 54-inch hunting bow sat waiting to be discovered, shifting towards the surface as the years went by until last September when National Park Service (NPS) employees discovered the bow in a lake in Lake Clark National Park and Preserve in southwest Alaska.

“From an archaeological perspective, the bow is quite a significant find,” said Jason Rogers, park archaeologist for Lake Clark National Park and Preserve.

And it was found in pretty good condition, considering its age and exposure to the elements for so many years. Believed to be about 500 years old, it only showed some “signs of biological growth,” according to Newsweek. It’s currently at an NPS center in Anchorage for analysis and radiocarbon dating has placed the creation of the bow around 1562, according to KTUU.

“No other archaeological bows are known from the Lake Clark region, or indeed from a radius of several hundred kilometers,” said Rogers. “The bow was found in shallow water. It was likely buried in fine alluvial sediments for an unknown period of time, as sedimentation is still apparent on the artifact’s surface. Both the burial conditions and the cold fresh water helped to preserve the bow, and nearly entirely prevented biological degradation.”

Those investigating the origins of the bow include both scientists and Indigenous experts. So far, NPS thinks the weapon could be Yupik in origin, which is odd to researchers because the Lake Clark area is Dena’ina homeland where the Athabascan have lived for thousands of years, not Yupik, according to KTUU.

Regardless, the discovery is rare – mainly because unlike other areas where development has occurred over centuries, burying artifacts along the way, Alaska just doesn’t “have that kind of development,” said Rogers, adding, “It’s very rare for us to come across material like this.”