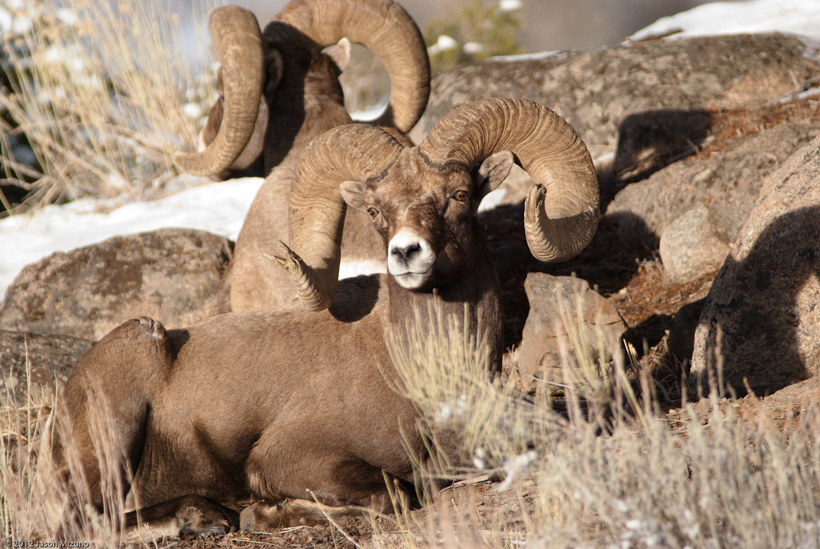 As the pneumonia outbreak continues to plague bighorn sheep across the North Dakota Badlands, domestic sheep are bearing the brunt of the blame. Ranchers, however, say the accusations have been made too quickly and urge wildlife officials to consider other possibilities.

It’s the worst pneumonia die-off of wild bighorn sheep in North Dakota’s 50-year program history. At least 23 bighorns have been declared dead of pneumonia in the northern Badlands habitat. Sixteen of the fatalities are among two dozen bighorns that were transplanted from Alberta, Canada in February. The other seven fatalities are from the resident group.

Authorities were alerted to the fatalities by radio collars, which give off a beeping signal when the animal is dead. While all of the Alberta bighorns have collars, only about 20% of the resident group do.

Brett Wiedmann, the Dickinson district Game and Fish biologist who has worked closely with the bighorn program, firmly believes that the bighorn sheep were infected by a small, local flock of domestic sheep.

The agency, however, says that while the domestic sheep are known carriers of the specific bacteria that has been found in the dead bighorns, there are no test results to prove that the illness was derived from the local sheep.

“We can’t say that with certainty because we don’t have tests from the domestic sheep,” said Jeb Williams, chief of the state wildlife division.

To further discuss the issue, the agency recently convened with the North Dakota Lamb and Wool Producers Association and the Board of Animal Health. They agreed that the two entities must work together in order to resolve the problem.

Williams said that regional research finds that it is imperative to keep the wild sheep separate from the domestic sheep. However, Brad Gilbertson, vice chairman of the sheep producers group, says he is not entirely convinced.

Gilbertson says that the resident bighorns had been near the suspect flock of domestic sheep for years without any problems. It was not until the Alberta bighorns were brought in that things went awry.

The domestic sheep in question had been given to a 15-year-old girl as part of the association’s “starter flock program.” Gilbertson said that the young girl now believes she is responsible for the biggest die-off in history but he quickly added, “I don’t know if that’s true.”

The sheep were removed immediately after the bighorn fatalities were discovered.

Yet no one saw any interaction between the wild and domestic sheep. The radio collars do provide location, but they do not record travel.

Gilbertson is not outright denying that the domestic flock is responsible, he is simply asking the agency to consider other potential factors.

“I’m not going to say the domestic sheep had nothing to do with this. I don’t have that science, but I expect Game and Fish to give me that same courtesy,” he explained.

State veterinarian Susan Keller shares the sentiment, maintaining that it is not wise to point a finger without proper evidence.

Keller says that it is likely that the transplanted animals were stressed, which itself is a serious health concern. She says it is also possible that the resident bighorns were carrying the bacteria and that it transferred to the Alberta group, or that the Alberta sheep were carriers and it was set off by their own stress.

“Maybe it’s a bad idea to bring bighorn sheep in if they should not be co-mingled — it’s a two-edged sword, the risk and adding biodiversity in the population,” she pointed out. “In our state, I thought we had accepted that risk.”

Conflicting theories aside, the one thing all sides can agree upon is that the micro-plasma ovipneumonia is one deadly bacteria.

There are about 200 bighorn sheep in the Badlands. The region is considered a “hub” for the animals, in a western North Dakota population of about 350.

The illness is so lethal that it has the potential to kill anywhere from 30% to 95% of a bighorn population. There is no vaccine.

At this point, the agency can only wait and see what happens, hoping that the fatalities do not continue.