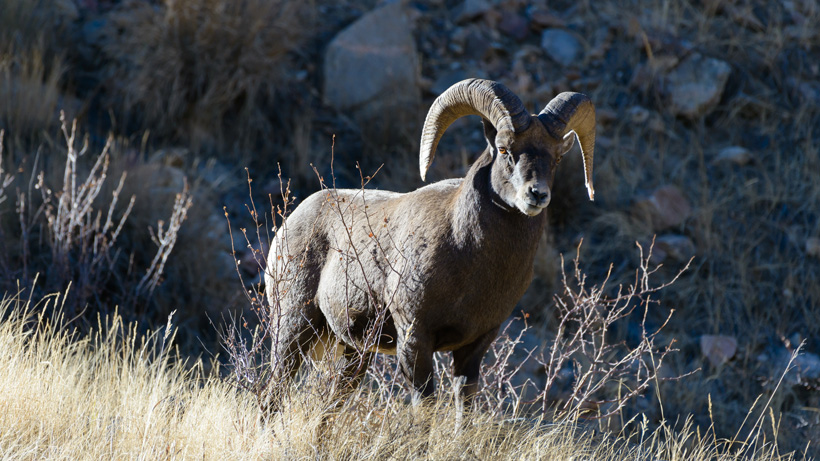 Should a real estate developer be allowed to build housing in prime bighorn sheep habitat? In Vail, Colorado, elected officials are considering a recent proposal that would allow the construction of 73 housing units in a meadow along Interstate 70. The problem? That’s also where a particularly visible herd of bighorn sheep already “hurt by human disturbances, weak vegetation and seasonal die-off” forages during the winter, The Denver Post reports.

While developers have suggested adding a berm and trees to “shield bighorns from people,” that’s more of a loose Band-Aid than a real fix. Like many bighorn sheep herds across the West, Colorado’s native herds are on the decline and those against this development believe it will definitely cause damage to the struggling herd.

"There unequivocally are going to be impacts. It remains to be seen whether any meaningful mitigation effort is going to have tangible benefits," said Colorado Parks and Wildlife biologist Devin Duval.

However, the issue is complicated. Vail needs close and affordable housing for resort workers. According to The Denver Post, only 20% of Vail’s 8,500 workers live in town because of how expensive it is to live there. For instance, a one-bedroom apartment costs about $1,200 and houses average $1.3 million. Yet, bighorn sheep that roam the Vail Valley have declined by 5% “of their historic numbers” and those that live east of Vail where the proposed development will be built have also declined by about 40% over the past 12 years, leaving only about 50 bighorn sheep in the decimated herd.

Triumph is the development company slated to buy the 23-acre site east of Vail, which is currently owned by Vail Resorts following a transfer of the property from the Colorado Department of Transportation. Developers have proposed to keep the 73 housing units on 5 acres, buffering “bighorns with the berm and tree-plantings” and have also proposed “to cut or burn trees adjacent to the housing” with the intention of improving the “foraging area for sheep,” The Denver Post reports.

But is that enough? Those who have to make the tough decision, which could be later this month, aren’t sure. In fact, three professional wildlife biologists have been hired by the elected officials to offer insight before making their decision.

“This is one of the most viewed bighorn herds in the state. The proposed mitigation based on offsite habitat treatments may not be adequate to compensate for both forage loss and impacts of disturbance,” wrote Rick Kahn, one of these consultants. He has worked for 32 years as a Colorado wildlife manager, has organized efforts to monitor bighorn sheep and wrote the state’s bighorn sheep management plan.

“I can find absolutely no beneficial effects of this project on bighorn sheep,” Kahn wrote in a July 3 memo to Vail’s sustainability manager, according to The Denver Post. “There will be a net loss of habitat, significant human-related disturbance and the potential impacts of habitat improvement may never be fully realized. …”

Colorado Wildlife Federation director Suzanne O’Neill also weighed in on the proposal, stating that it was “quite inadequate.” She suggested that developers work with wildlife biologists to come up with a proposal that would “offset harm.”

“We have to presume that, with our state population expected to double by 2050, we’re going to have more and more of these situations,” said O’Neill. “We’re going to have conflicts between human community needs and important wildlife habitat. We need to look at them case by case early on in the process.”